I’m Taking A Little Break From Exercise. And, Damnit, Even That Involves a Whole Slew of Emotions.

I’ve had a tough few days, but I’m working through it. Sharing it will help. So here goes!

I’ve been noticing, for a few weeks, some changes. I’ve been pushing myself pretty hard, workout-wise, for a long time, and I’ve been feeling worn out. Perpetually. I’m normally excited about my exercise plans for the day, or later on in the week, but END_OF_DOCUMENT_TOKEN_TO_BE_REPLACED 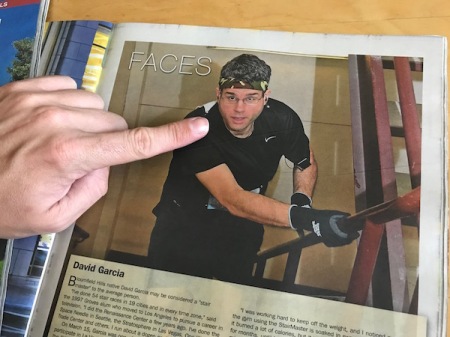 I’m featured in the April 2018 issue of Downtown magazine, a local paper that serves END_OF_DOCUMENT_TOKEN_TO_BE_REPLACED

More Photos From a VERY Active Weekend in San Francisco

One might rightfully assume that climbing the stairs in a 48-story skyscraper twice (read details here) would be a satisfactory workout for the day, but NOT FOR US! When we left the Fight For Air Climb in San Francisco, it wasn’t to go have brunch or head home. We headed to a famous stadium, where we… continued to exercise!
END_OF_DOCUMENT_TOKEN_TO_BE_REPLACED

My As-Seen-On-TV Workout! I Climbed the Giant Stairway Featured on a New ABC Comedy

Have you seen the new ABC comedy “Splitting Up Together”? Only four episodes have aired, on Tuesdays at 9:30/8:30 central. Last week’s episode featured three actors climbing an enormous stairway, and as soon as I watched, I knew I had to climb them myself!

Here’s the same stairs on “Splitting Up Together”: END_OF_DOCUMENT_TOKEN_TO_BE_REPLACED

I have finger sporks and you don’t!

Well, maybe you do. I’m not sure. Regardless, using two or more fingers to hold an eating utensil is for suckers. Because all you need is one finger. END_OF_DOCUMENT_TOKEN_TO_BE_REPLACED

The race was up 63 stories in the stairwell of END_OF_DOCUMENT_TOKEN_TO_BE_REPLACED

I Swore I’d Never Return to This Store Again. Here’s Why I Came Back, 8 Years Later

I hated clothes shopping when I was 400 pounds. I hated how much I had to look in mirrors, I hated the shame I felt every time I was bigger than the largest size available, I hated every step of the process. It was the worst.

At the time, I wore size 56 pants and either 3XL or 4XL shirts. Because of END_OF_DOCUMENT_TOKEN_TO_BE_REPLACED

Here’s something you don’t see every day: a 5K race that starts by running through the very same starting gates that horses use at one of the most famous horse racing venues in the country!

The race was the Derby Day 5K, held at END_OF_DOCUMENT_TOKEN_TO_BE_REPLACED

Five Races Under My Belt So Far This Year… and Five More in the Next Five Weeks!

I’ve been thinking lately about my very first stair race, at the Aon Center in Los Angeles. It happened six years ago, and while I can remember it vividly, it also seems like a lifetime ago.

I’ll be returning to the Aon Center a week from Saturday, for my seventh consecutive year racing up the 63-story stairwell. It will be END_OF_DOCUMENT_TOKEN_TO_BE_REPLACED