My As-Seen-On-TV Workout! I Climbed the Giant Stairway Featured on a New ABC Comedy

Have you seen the new ABC comedy “Splitting Up Together”? Only four episodes have aired, on Tuesdays at 9:30/8:30 central. Last week’s episode featured three actors climbing an enormous stairway, and as soon as I watched, I knew I had to climb them myself!

Here’s the same stairs on “Splitting Up Together”: END_OF_DOCUMENT_TOKEN_TO_BE_REPLACED

I Left Town for a Weekend Getaway… and Stumbled Upon Some Awesome Public Stairways!

I spent the weekend in San Clemente, California – a small beach town in Orange County. My entire family gathered there to celebrate my mom’s birthday, and my sisters and I stayed active by going on long walks both days. It was during those walks that we stumbled across a major find… public stairways that would be fantastic for stair training.

The stairs are all brand new, built as part of the END_OF_DOCUMENT_TOKEN_TO_BE_REPLACED

I Clean Up Well, Right?

I don’t dress up fancy very often, so I try to take photos when I do. I know for a fact that my mom enjoys seeing them!

I love the sunlight in this photo! I was trying to look mysterious, but it might have come off as a little pained. Whoops.

On Sunday night, the Los Angeles Chamber Orchestra held their annual gala. It’s the fourth time that I’ve volunteered to help out. It’s a END_OF_DOCUMENT_TOKEN_TO_BE_REPLACED

Training Like An Olympian (Or, Is Apolo Ohno Trying To Kill Me?)

That’s the Los Angeles skyline at the end, so I immediately put on my Nancy Drew hat and got to work figuring out where the commercial was shot. Using END_OF_DOCUMENT_TOKEN_TO_BE_REPLACED

My First Visit to the Santa Monica Stairs

Two friends from college came to town over the weekend. I’ve known Katie and Julie for about 15 years now. I see Katie once a year or so, but it’s been about 5 or 6 years since I’ve seen Julie, so it was really fun to reconnect. I picked them up from the airport, and since Julie had never felt the Pacific Ocean lapping at her feet, we went straight to the beach. 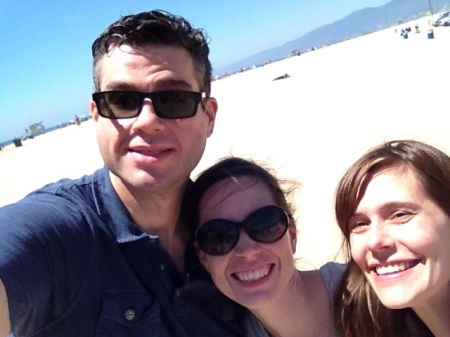 Since I have the longest arms, I END_OF_DOCUMENT_TOKEN_TO_BE_REPLACED

I’ll warn you now: the title of this post is a complete exaggeration. But it stems from a truthful place – a little nugget of shame that actually exists within me. And that little nugget is this:

In the nearly 12 years that I’ve lived in Los Angeles, I’ve never been to the Griffith Observatory.

A Workout For the Record Books

This past Saturday, I did something that I’ve never done before. I’ve never even come close to accomplishing what I did on Saturday. It was a record-shattering workout, in more ways than one!

On Saturday, I completed a six-hour, 15.7-mile urban hike throughout Silver Lake that involved 42 staircases and 4,314 steps. Yes, it was exhausting. Yes, I’m still sore. And yes, it was awesome.

Here’s just one of the staircases – we climbed 42 of these bad boys: