Well, At Least This Shitty Week Was a Healthy One

My car has been in and out of the shop for the past week. I have my car now, but it’s been a super frustrating experience, and an expensive one, too, but this isn’t a blog about auto repair, is it? So instead of boring you with details about alternators and poor customer service, I’ll share the details about how I turned a shitstorm of a week into a healthy one.

I take a car to a place that’s exactly 2.5 miles away. (I should change that into past tense, because I don’t think I’ll be taking my car there any longer.) When I first dropped my car off last week, I decided to walk home. It was a leisurely walk, and it took 50 minutes.

I was sans car the next day (which isn’t a ginormous problem, as I work from home), and after work I walked to the supermarket to buy a few things I needed for dinner (they were actually kangaroo fixins’). That was 1.5 miles round-trip.

My shop offered to send someone to come pick me up the day after that, when my car was ready, but I declined, laced up my shoes, and ran there. I even took a more circuitous route, which added an extra mile.

I had the car back for a few days, but then had to return it for a different issue (which I swear was directly related to the first, although the shop says wasn’t). I returned it early this week, and again, I declined the ride they offered, and ran home.

They had my car for two more days, and when it was ready (again), I hit the streets and walked back. At first I thought I would run again, but decided against it – I had done a couple tough workouts the prior days, and had another tough one planned for the next day, so I was fine with just walking.

That’s FIVE walks or runs directly related to my car problems – and 12.5 miles!

But that’s not all. No car meant no easy way to get to the gym, so I leaned a little harder on my Bowflex MAX Trainer than I normally do. 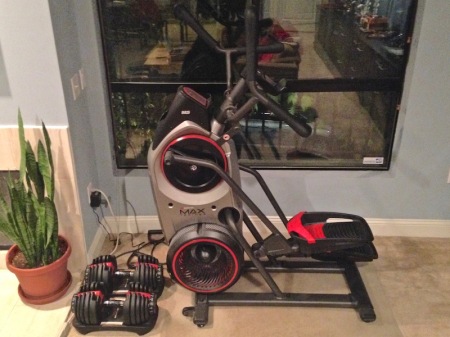 The MAX Trainer is an awesome cardio machine that I describe as a cross between an elliptical and stair machine. (Read my blog posts about it here and here.) Typically, I use it once or twice a week, rotating it in with other types of workouts. During these car shenanigans, I did 4 intense programs:

OH! And did I mention I wore my elevation training mask during all of them? And it was set to 6,000 feet. I also wore the mask during both of the aforementioned runs (although I didn’t wear it on the walks). That mask makes everything tougher – and MAX Trainer is already pretty tough to begin with!

My Bowflex SelectTech dumbbells also got some love while I was homebound and carless. I’ve discovered that if I watch a late-night talk show on my TiVo while using them, the distraction (and the comedy) helps me get in more reps than usual. And I TiVo seven talk shows every night, so there’s always something to watch! (Read my blog post about SelectTechs.)

One more workout success: Last night, when I headed downtown for a stair training session in the Aon Center. (I had my car back, but took the train, to avoid rush hour on the freeway.) I climbed 51 stories three times – that’s 153 total stories. While wearing the elevation mask set to 6,000 feet. And I didn’t collapse from lack of oxygen.

That mask makes things brutal, but I’m starting to get used to it, and I’m happy about that, because my Denver race is coming up in a few weeks! First I gotta conquer my Seattle and Portland races, both of which are this weekend. Send good vibes my way!

This entry was posted on Friday, January 22nd, 2016 at 1:09 am and is filed under Uncategorized. You can follow any responses to this entry through the RSS 2.0 feed. You can leave a response, or trackback from your own site.

4 Responses to Well, At Least This Shitty Week Was a Healthy One