My next post was going to be my New York City race recap… not anymore! I got productive on the plane and wrote a post originally intended for next week.

There was a huge bin of popsicle molds by the registers at the drug store. Stores place cheap, enticing items near registers to encourage impulse purchases, and boy howdy, did I fall for it. I’ve never made popsicles before, but now I could… for the low, low price of TWO DOLLARS! Sold.

My first popsicles, which I made that night, weren’t very pretty. In fact, they were positively unappetizing.

And how did it taste? 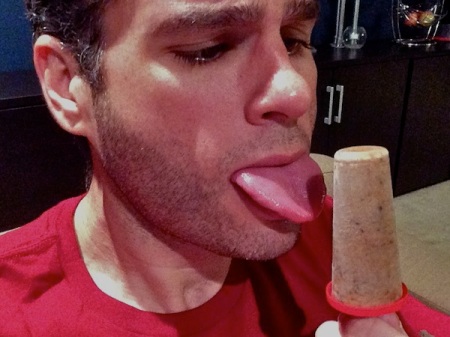 It was okay. A little too much carrot, not enough blueberries, a little gritty (so add more liquid to the mix next time?). Which leads me to:

I wanted to try using protein powder as a base, so I gave that a whirl for my second attempt. I used Bowflex Body French Vanilla Fitness Shake, which I thought would work great, because the powder is extremely fine, so when I make shakes, they’re super smooth and creamy (delicious, too).

I’m going to go back and experiment with fruit-only recipes (or fruit-with-some-veggies recipes, to up the nutrients). My brother swears by a banana ice cream recipe he makes for his kids: frozen bananas, nut milk (like Almond Milk), and a dash of vanilla extract, so I would like to try that in popsicle form.

Do you have popsicle-making tricks and tips? Or recipes that you love? Share them in the comments section!

I’d say I already got my money’s worth out of those popsicle molds… and I love having a quick, low-fat, no-added-sugar, DIY option to satisfy my sweet tooth!

This entry was posted on Thursday, May 14th, 2015 at 11:16 pm and is filed under Uncategorized. You can follow any responses to this entry through the RSS 2.0 feed. You can leave a response, or trackback from your own site.

2 Responses to Popsicle Experiments: Part One