I got a new toy that I’ve been using lately, and it’s totally awesome. I’m now the owner of a…

Perhaps you’ve seen these in stores, or seen the infomercial on TV. It’s a high-powered fancy blender, and it’s great for making smoothies.

I got my blender recently as a belated birthday present (or an early birthday present? My birthday is in March) from my sister, Sarah. It’s a hand-me-down blender – she’s been using it for a year, and loving it. But she invested in a new blender, so she packaged this one up and sent it my way. It might as well have been a brand-new blender – she kept all the original packaging, and fit all the parts back in the box like it was when she bought it. I was very impressed by that. And who cares if it’s pre-owned? Not me.

Sarah predominantly used it to make smoothies – she’s a certifiable smoothie junkie. She makes one every morning, and loads it with fruit and greens. I suspect I’ll use it predominantly for smoothies too – in fact, that’s the only thing I’ve made with it so far. I photographed my very first smoothie. Wanna see?

The great thing about smoothies is that while you can find tons of recipes out there for them, you don’t really need a recipe at all. Just throw in your favorite ingredients, or whatever you have lying around, and through trial and error, figure out what you like!

The contents of my first Ninja smoothie:

Some skim milk at the bottom, followed by a scoop of vanilla protein powder, and a teaspoon of ground flax seed (a great source of Omega-3s). Then, frozen berries (a pre-packaged mix of blueberries, raspberries, and blackberries). If you use frozen fruit, you don’t need to add ice! Next, a couple handfuls of spinach. I happened to have a roma tomato that I wanted to use up, so I quartered that and tossed it in. Lastly, 2 apples, cored and quartered.

The ninja has a bunch of blades that rise up about 4 inches from the motor, so it makes quick work of whatever you put in there. After 20 seconds or so, I had a smoothie! Well, kind of. It was super thick – almost more like a pudding: 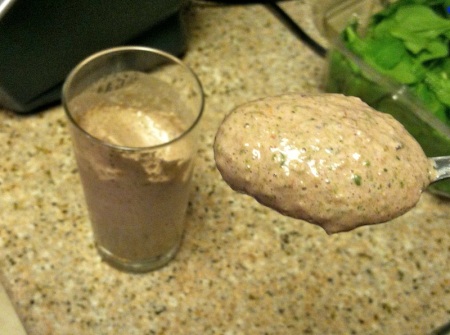 So I tossed it back in the Ninja with some more milk, and soon enough, it was the perfect consistency.

The color isn’t very appealing, but it was pretty good. The tomato wasn’t a great addition, and I’ve remembered that for subsequent smoothies.

Smoothies are a great way to get some greens or veggies into your diet. The sweetness of the fruit you add masks the flavor, so it doesn’t taste like a glass of veggies. And if you’re not sure you’d like greens in your smoothie, then don’t add them. Or, add a little bit to start, and work your way up!

In other news, I’m continually to pay it safe after aggravating my rib injury the other night. And that means pedaling away on a recumbent bike during my workouts, since that only requires use of my legs.

The bike said I burned 551 calories, but I don’t know how to enter my weight on this bike (or if that’s even an option), so that number is probably inaccurate.

I still have some pain in my chest, but substantially less than a few days ago. And that pain isn’t worsened by my exercise. I think I’ll stick to the bike for a little while longer.

This entry was posted on Thursday, December 19th, 2013 at 12:02 am and is filed under Uncategorized. You can follow any responses to this entry through the RSS 2.0 feed. You can leave a response, or trackback from your own site.