Peanut butter, along with almond butter and other nut butters, is one of those foods that I really can’t keep in the house. It has benefits, like protein and healthy fats, but I love it too much, and I can never limit myself to a serving size. I’ve eaten peanut butter with a spoon directly out the jar, and when you exceed a serving size, the cons start to outweigh the pros. Peanut butter is loaded with calories and fat.

While I was hanging out in Colorado last weekend, my sister and brother-in-law introduced me to a product that solves those problems. I instantly fell in love. It’s called PB2, and it’s Powdered Peanut Butter. 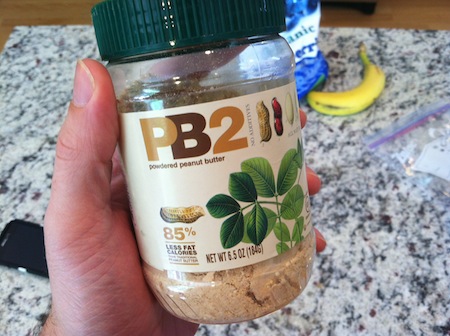 PB2 is a product that keeps all the stuff that’s great about peanut butter, and greatly reduces the bad stuff. According to the package, “peanuts are first slow roasted then pressed to remove 85% of the fat and oil.”  A 2-tablespoon serving has 45 calories and 1.5 grams of fat. Compare that to Jif, which has 190 calories per 2-tablespoon serving, along with 16 grams of fat, 2.5 of which are saturated. 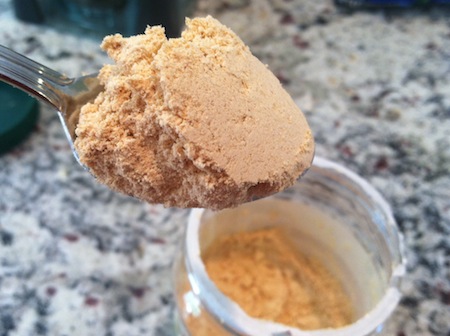 It’s really easy to reconstitute – just mix 2 tablespoons of the powder with 1 tablespoon water and stir. I eyeballed it, and got a smooth, creamy end result: 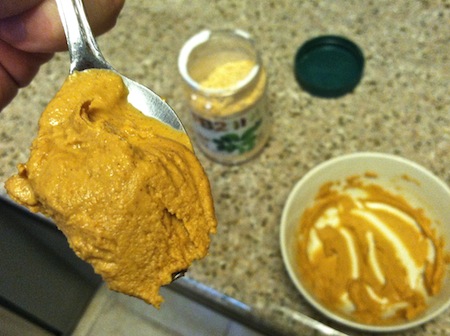 It’s an alternative to peanut butter that’s not really an alternative at all! And because it’s powdered, I won’t be tempted to eat it straight from the jar – you wouldn’t believe how much the step of reconstituting it will stop me when I’m in a snacky mood.

I don’t know if I plan on reconstituting it much anyway. I’m much more excited for the potential as an additive to other recipes. So far, I’ve only had it plain (see above picture) and in smoothies. Wanna see the fruity peanut butter smoothie my sister Sarah made for us in Colorado?

Sarah is crazy for smoothies right now. She makes them every morning before work as a way to jumpstart her day with fruit and vegetables. She has a Ninja blender that’s great for smoothies, and she alters the recipe every day, based on what she has in the house. She doesn’t measure anything – and that’s the great part about smoothies: they’re hard to muck up.  She starts by filling it up with dark leafy greens, usually a mixture of spinach, chard, and collard greens:

To that she adds a little liquid, like soy milk. 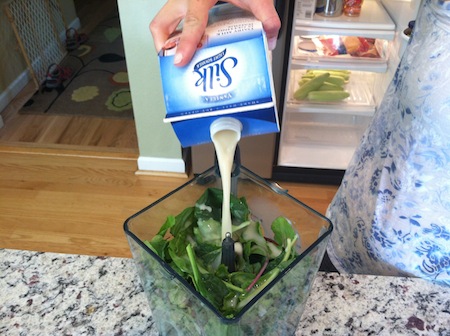 Before adding any more ingredients, she blends it up, because she likes the greens absolutely pulverized. All those greens reduce to a small but delicious smoothie base. 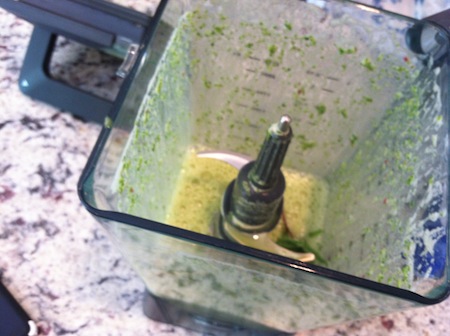 Then, the fruit: one fresh banana, and frozen strawberries and blueberries, a handful or so of each. If your fruit is frozen, you won’t need to add ice. 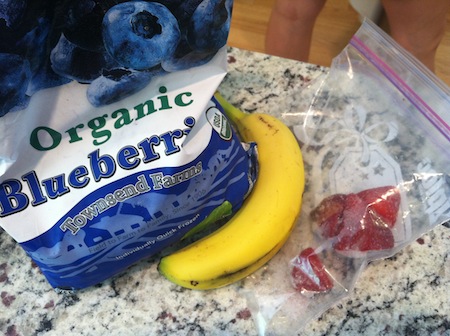 After that, a tablespoon or two of PB2. Then, it’s all blended together, and it looks like this: 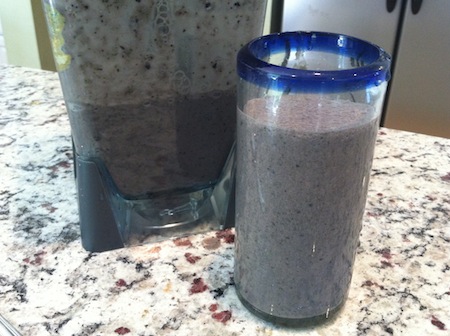 Delicious! It’s fruity and thick, and there’s some peanut butter flavor that’s not overwhelming or sticky.

I haven’t done it yet, but I look forward to adding a little PB2 to oatmeal, or maybe Greek yogurt to make a fruit dip. The PB2 website also has recipes that I might play around with – their Crunchy Cinnamon Chickpeas recipe sounds interesting. Their website also has a store locator, which I used to learn that it’s not available in California except in a handful of specialty stores, none of which were in my neighborhood. So I bought 2 jars in Colorado and brought them home with me.

TSA Alert! PB2 set off red flags at airport security. They ended up x-raying my bag twice, and four agents examined the PB2 jars before letting me continue on my way. “If you’re gonna fly with peanut butter,” one of them said, “this is the peanut butter to fly with.” I explained the benefits to two of the agents, and they seemed intrigued.

I just re-read this post, and seems like a giant commercial for PB2. I’m not being compensated by PB2 – I just really love the product, and think you may too. It seems like, at the moment, demand is pretty high. You can order PB2 on its website, but they’re all out of stock. I hope some more retailers in my part of the world start stocking it, because when these two jars are finished, I’ll definitely want to purchase more.

This entry was posted on Wednesday, May 29th, 2013 at 1:15 pm and is filed under Uncategorized. You can follow any responses to this entry through the RSS 2.0 feed. You can leave a response, or trackback from your own site.