Here’s a recent dinner I made. Looks pretty good, doesn’t it?

It was easy to make, with three basic components: veggies, meat, and rice. But that’s technically a lie, because the meat wasn’t meat, and the rice wasn’t rice!

I saw this package of plant-based meat at the grocery store and snapped it up. 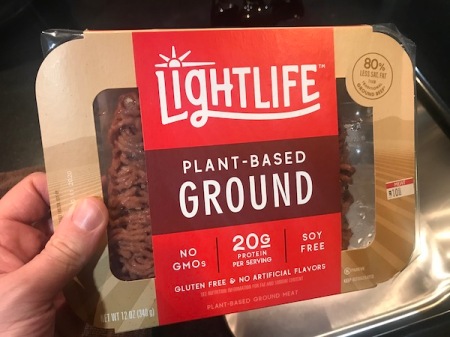 I may not be a vegan, but I love plant-based substitutes. I find them satisfying and tasty, and this was the first time I’ve seen fake meat sold to replicate ground beef, as opposed to being formed into burger patties or sausages. I couldn’t resist!

In case you’re curious, the main ingredients in this Lightlife product are water, pea protein (which has been the basis of many protein powders I’ve consumed), and canola oil. They add beets to color it like ground beef. Per serving, it’s high in protein (20g) and fat (17g), low in carbs (10g), and 270 calories. The same amount of 90% lean ground beef, for comparison, has 23g protein, 12g fat, zero carbs, and 200 calories. Products like these may not be exceptional swaps if you’re strictly counting macros, but plant-based options are appealing for environmental, sustainability, and animal cruelty reasons.

But I digress. I’m talking about my dinner! I browned my fake meat in a big skillet, breaking it up into smaller pieces with a wooden spoon. The sizzle and smell was reminiscent of ground meat, and totally made my mouth water.

Meanwhile, I put together my… fake rice! 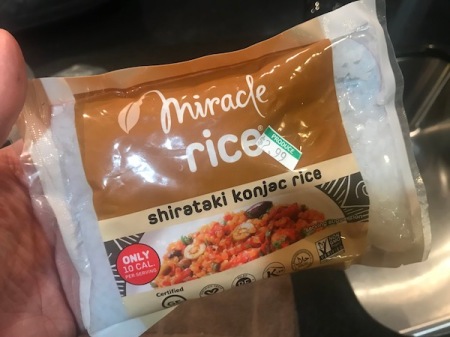 I’ve eaten Shirataki noodles many times. They’re basically plant-based noodles (made from a root vegetables). Never ever have I thought I was eating pasta or Asian noodles, but they’re a great way to bulk up a meal (an entire pouch is 20 calories), and they’re bland, so they let other flavors shine. I’d never seen Shirataki cut into rice-sized pieces, though, so I bought them and gave them a whirl.

Following the directions on the package, I rinsed them, boiled them for two minutes, drained them, and then let them dry out in a skillet over low heat.

Halfway through the fake meat cooking process, I added a whole bunch of veggies to the mix: one red onion, one yellow pepper, and the greens from half of a leftover salad kit, which had kale and Brussels sprouts as foundational ingredients. 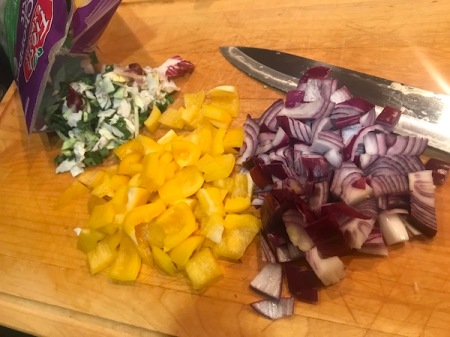 Once the fake meat and cooked and veggies were tender, I added two final ingredients. The first was a splash of Zip Sauce, which is a thin, salty, herb-based steak sauce that was created in Detroit. I didn’t add any other salt because I knew I’d be adding this ingredient.

I thought a good steak sauce would be a nice compliment to fake meat. Why not? And since the Zip Sauce is supposed to be mixed with butter, I added a couple tablespoons of butter at the very end. Then I folded in the rice, and piled it up on my plate! 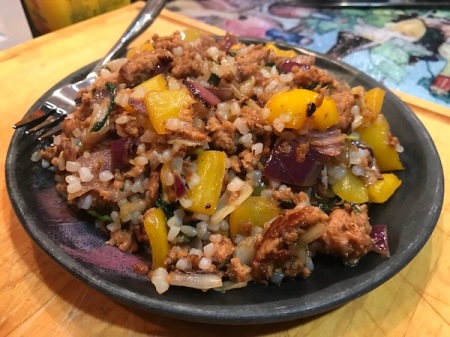 It looks like a big portion, but that’s a salad plate. The good ol’ use-a-smaller-plate-to-make-servings-look-larger hack works every time!

This was a completely delicious meal. I’m glad I kept the Zip Sauce to a splash, because it is salty and strong, even though I liked the flavor. I couldn’t identify a difference between the fake meat and ground beef.

While the fake rice didn’t taste like rice at all, it served its purpose: bulked up the meal and added a new texture (although it wasn’t as firm as regular rice).

I made enough to have another huge serving the next day. Tasted pretty good as leftovers, too. I’d absolutely make a version of this meal again. And I say ‘version’ because it’s not going to turn out the same way. That’s the great thing about stir-fries – you can add whatever vegetables you have lying around, switch up the seasonings, and make it a whole different experience, and all while keeping it healthy.

This entry was posted on Wednesday, February 5th, 2020 at 7:31 pm and is filed under Uncategorized. You can follow any responses to this entry through the RSS 2.0 feed. You can leave a response, or trackback from your own site.

3 Responses to What’s In This Stir-Fry? You’ll Never Guess!