In my last post, I shared a big exercise win for the week: my first run in six months. This post is about a big food win – a delicious meal with a few interesting (and new-to-me) ingredients. 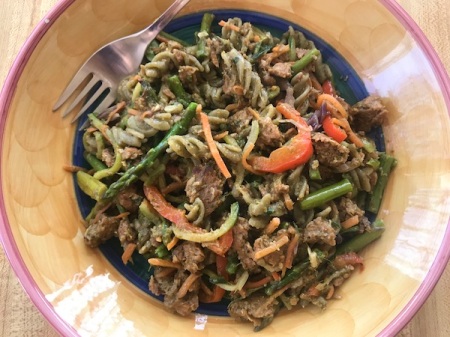 Looks delicious, right? It’s vegetables, pasta, and ground meat. Except that it’s not pasta or meat, at least not in the traditional sense.

The pasta alternative is mung bean pasta, made by a brand called Explore Cuisine.

I don’t think I’ve ever had mung beans before, but they are nutritional powerhouses, full of antioxidants, vitamins, and minerals. What I love about this product is that literally the only ingredient is ground up mung beans. No fillers, no other flours, no preservatives. Just beans, ground to a powder, and formed into rotini.

It cooks up just like regular pasta, and has 1/3 less carbs.

Then, instead of meat, I tried a brand of plant-based ground ‘meat’ I’d never heard of before, called Happy Little Plants.

(The big white area is where a coupon was attached to the package – I peeled it off and saved $2 at check out!)

I’ve written about other plant-based meats before. From a calories and protein standpoint, they’re not hugely different from beef, although they are much lower in saturated fat and cholesterol.

The plan for this fake meat was to crumble it and brown it like I would ground beef, and it worked well! This was unseasoned, so I added pepper and a little seasoned salt to it while it cooked.

Once it was sufficiently browned, I transferred it to a bowl, and, in the same skillet, sautéed a ton of vegetables, starting with a bunch of asparagus, cut into smaller pieces…

…and another cup of shredded carrots, just to use up a bag I had in the fridge.

Because everything was so thin, it cooked up pretty quickly!

That’s a pretty big skillet, so I ended up just adding back in the cooked fake meat, the cooked pasta (which I had boiled in a separate pot), and a small jar of store-bought pesto sauce. 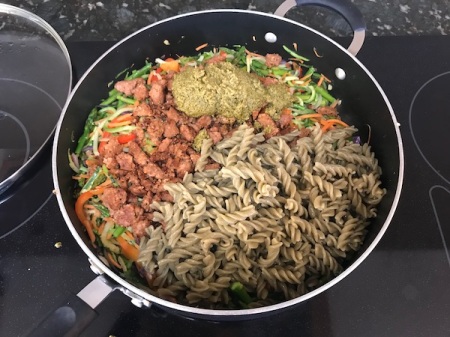 Then I stirred it all up, until the pesto coated everything, and the fake meat was warmed through.

That’s it. Dinner is served! 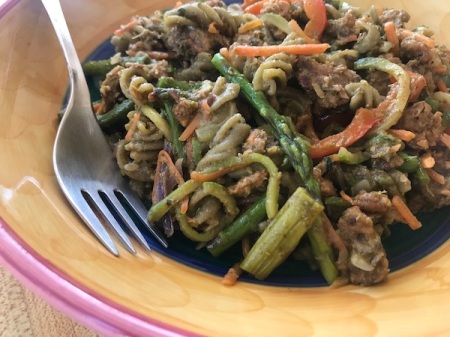 I don’t eat pasta often, but I like alternative pastas when I do (like the red lentil pasta I tried a few weeks ago). I also like using them in veggie-based dishes, so the pasta ends up being an accompaniment, instead of the main ingredient. This dish definitely checked that box. Mung bean pasta doesn’t quite have the save texture as semolina pasta, but you can’t really tell in a dish like this. And I thought the fake meat was a successful facsimile of the real thing.

This is the way I like to eat! Lots of veggies, lots of flavors, and with smart swaps that make the meal a little bit better for me than it otherwise might be.

Running Update: The first installment of my new Tuesday virtual run club was a success! I ran 4.0 miles in 45 minutes, already improving on Sunday’s run, when I covered 3.75 miles in 45 minutes. My buddy Josh had a nice run in Ohio, and Jocelyn had a great run too! (Although she did hers on Wednesday morning.)

This entry was posted on Wednesday, May 13th, 2020 at 7:35 pm and is filed under Uncategorized. You can follow any responses to this entry through the RSS 2.0 feed. You can leave a response, or trackback from your own site.