I had a nice six-week hiatus from racing, but on Saturday I pinned a bib to my chest and a timing chip to my shoe, and participated in Tower 2 Tower, a fun and different stair race in Oxnard, California. This race is special because it’s the only race I’ve done that involves stairwells in two separate buildings. The race begins with a climb up the 14-story City National Bank Building…

…and ends with a climb up the 22-story Morgan Stanley Building. 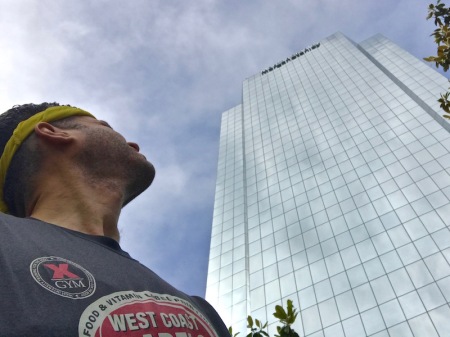 In between, you gotta race down a different stairwell in the City National Bank Building, and then run a couple hundred yards across a parking lot, where the organizers have set up an obstacle course.

This was my second year competing in Tower 2 Tower, which benefits the Oxnard Fire Explorers, and while that sounds like a club for pyromaniacs, it’s actually a program for high-school-aged aspiring firefighters. I really flubbed this race up last year, by ignoring all notions of pacing and throwing all strategy out the window. I was determined to not let that happen again.

I positioned myself near the front of the line outside the City National Bank Building, alongside my friends Leland and Howard. You can see the Morgan Stanley Building behind us, so that’s how far apart the two buildings are.

A few minutes before the race began, an entire high school track team showed up, and we gladly let them be the first to enter the building. I don’t think many of them had done a stair race before, but you can’t compete with age, and I’m twice as old as all of them.

We entered the building on 10-second intervals, and instead of going balls-to-the-wall, like I did last year (before flaming out way to early), I stuck to my plan and paced myself. Instead of feeling wiped out by the 7th or 8th floor, I easily made it to the top, with plenty of energy left, and ran through the halls to the other stairwell for the descent.

Going down the stairs is my least favorite part of this race. Racing down stairs is very dangerous – much more so than going up – and this is only one of a couple races I know of that include a going down element.

I didn’t skip any steps going down, and used the handrail as a braking system to slow down my momentum as I made the turns. Perhaps I was a little on the over-cautious side, but you know what? I didn’t jack up my knees or ankles, and that’s what I wanted to avoid.

After emerging into the parking lot, I started for the obstacle course. The obstacle course is an optional element, but I did it last year, so in order to go for a truthful PR, I had to do it this year. Plus, I drove an hour for this race, so why not do every component?

The obstacles were slightly different this year, and they were fun. It began with running through tires… 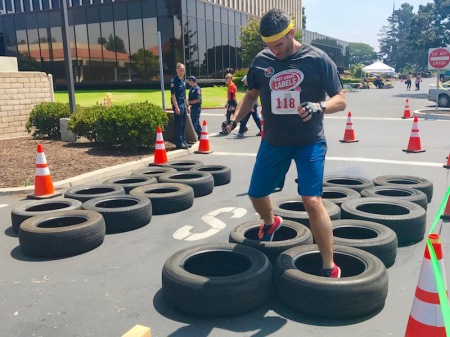 …and there was a balance beam, some stacks of hay bales and a short wall to climb over. You had a haul a tire around a cone, and carry a huge length of coiled fire hose around another cone.

The obstacle that tripped me the most was simply screwing together two fire hoses. I kept on doing ‘righty tighty’ (as opposed to ‘lefty loosey’), but I couldn’t figure out how it worked. It seemed like I was there forever, although it probably wasn’t that long at all, before I felt the threads connect, allowing me to finish the obstacle and move on.

After the obstacles, it was a short run to the entrance of the Morgan Stanley Building, and then there was only 22 stories of stairs between me and the finish line. I was tired and sore – and thanks to the obstacles, more of my upper body was sore than I’m used to during a stair climb – but I kept chugging along, pushing myself. 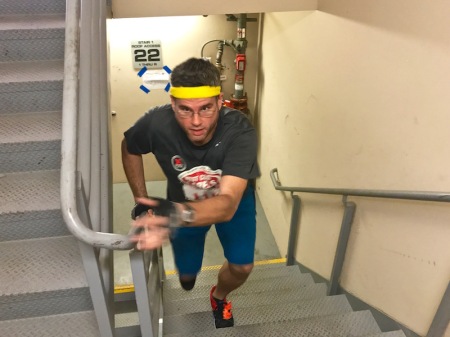 This race ended on the roof, and the sun was so bright as I turned the corner and started up the final flight that I almost felt blinded. I was so disoriented (and exhausted), that I almost accidentally cheated at the last moment! Here’s what happened:

At the end of the race, you emerge on the roof, and are supposed to run around the pole with the windsock to get to the timing mat that serves as the finish line:

Well, because it was so bright, I was looking down as I emerged from the stairs, and I saw the bright blue mat on my right before I saw the orange ribbon above it. So, as soon as I cleared the railing, I made a hard right turn for the mat, and, at the last second, caught myself before busting through the ribbon altogether. Slightly embarassed, I dashed around the pole and finished my race.

After the finish mat, there was five or six more steps to get onto the helipad, and I was so wiped out, I had to stop and kneel on those steps for a few seconds before continuing on. A few seconds after that, I plopped down in the center of the helipad, and laid there for a few minutes, until I felt recovered. Here’s my first selfie, after standing back up – I’m clearly still pooped: 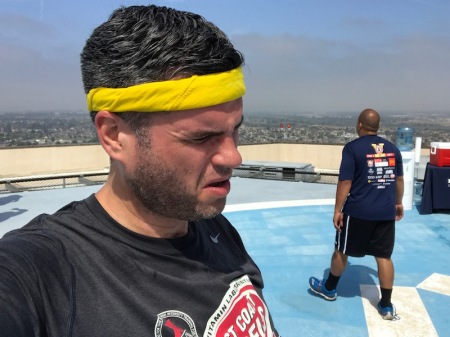 My friend Amy was the timing company official monitoring the finish line, and she told me that I was the only one who nearly plowed through that orange tape at the finish line. Well, you gotta stand apart somehow! Here’s me and Amy: 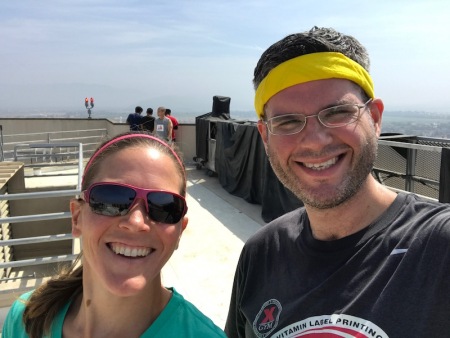 And me on the helipad! (The Pacific Ocean is way back there in the distance.)

I love being on rooftops, and this particular roof is the tallest roof in Ventura County.

This race gives out snazzy finisher medals, so I added this to my collection:

As my friend Madeleine would say, a medal like that is always earned, never given.

This race attracts a lot of firefighters, as well as men and women who work in law enforcement and the armed forces, and a lot of those groups were well represented in the expo area. They had a few huge fire trucks on display near the registration tables, including this old-timey, retired truck that I got to sit in: 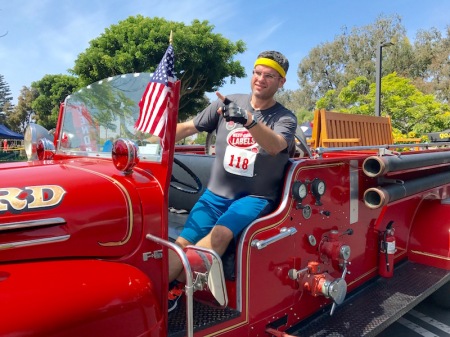 Another race – my seventh stair race of 2017 – is now in the books. My next stair race is in mid-August (summer is a slow season for stair events), but between now and then I’m probably going to do a couple running races. Well, I’m at least going to do one, because I just signed up for it yesterday… and it’s next weekend!

This entry was posted on Monday, June 5th, 2017 at 12:39 am and is filed under Uncategorized. You can follow any responses to this entry through the RSS 2.0 feed. You can leave a response, or trackback from your own site.