A Few Days on Mackinac Island

I’m baaaaack! Hope you all had a great Fourth of July week. Mine was wonderful – I spent it hanging out with family in Michigan, where I grew up, visiting places we used to go to all the time when I was a kid.

First stop: Mackinac Island. Located in the very northern part of Lake Huron, Mackinac Island is known for a few things: its history, its ban on motor vehicles (which means bikes and horses are the main means of transportation), and its many fudge shops. As many brochures and websites point out, visiting Mackinac Island is like stepping back in time – specifically, to the late 1800s, when many of the island’s buildings were constructed.

The island is only accessible by ferry, and my in-law Anne took this great picture of me as we pulled away from the mainland.

We used to go to Mackinac Island every summer as a kid, but I haven’t been in about 20 years. Not much has changed. There’s still a small but vibrant town right on the water, lined with hotels, restaurants, and more fudge stores than you can imagine:

There’s Fort Mackinac, which played a role in the War of 1812, on a bluff overlooking (and protecting) the town:

And there’s the Grand Hotel, the most famous building on the island, which is known for having the longest porch in the world (660 feet long): 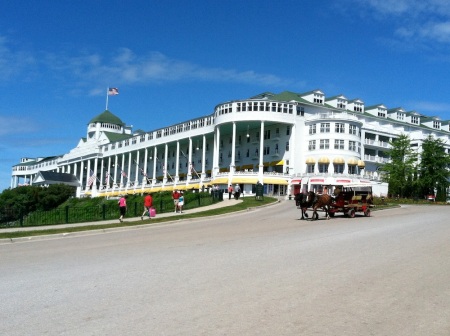 Our trip was organized by my sister Sarah, and there was over a dozen of us, including lots of family members and a few of Sarah’s friends. We stayed at Mission Point, the same hotel we stayed at in the ’80s and ’90s. We took a horse and carriage tour one day, and one of our horses, Maurice (standing closest to the camera), was the heaviest of the 500 horses on the island, weighing in at 2,400 lbs.

The tour ended at the Fort, where we learned about life in the 1800s, watched a cannon demonstration, and took lots of pictures.

The view from the fort was spectacular. 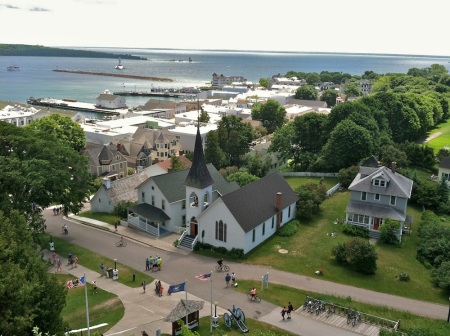 The next day, we all rented bikes, and set out on a ride around the island. There’s a road all along the perimeter, and a complete loop is about 8 miles. The island has some great sights, including Arch Rock, a limestone formation 146 feet above the water line. 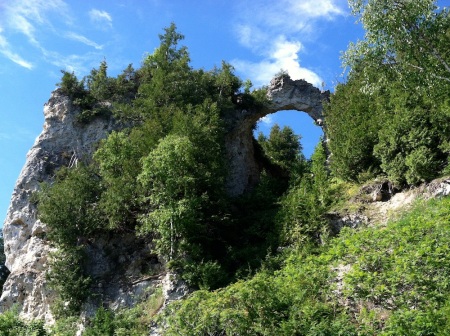 Once you get halfway around the island, you’re treated to views of the Mackinac Bridge, one of the longest suspension bridges in the world, which connects Michigan’s upper and lower peninsulas. Here’s me and my parents enjoying the view (you can see part of the bridge over my mom’s right shoulder):

My dad’s wearing his favorite hat, made of kangaroo leather, and I tried it on when we were relaxing in the hotel room, and whatdoyaknow? It fit pretty well!

…but I was ready for more, so after we parted ways, I continued on my own, riding an additional 13 miles, including another complete loop around the perimeter.

I kept active every day we were there. 21 miles on a bike was a sufficient workout for that day, and on the other days, I got in a workout at the Mission Point fitness center, which was pretty big and well-equipped for a hotel gym. I got in another cardio workout one day, and on the day we left, I got in a good upper-body weightlifting session. Plus, Mission Point is about a half-mile walk from town, and I walked to and from town a couple times every day.

My eating was great, too. I balanced lots of healthy foods with occasional treats. I’m not going to go into much detail here, because I photographed every single thing I ate, and tweeted those photos, so check out my Twitter feed if you want a more thorough rundown. A couple highlights, though: An amazing pork tenderloin dish at Chianti restaurant at Mission Point. I also had my first pasty, a meat pie dish that’s famous in the upper peninsula, on the mainland before boarding the ferry. And while I didn’t buy any fudge, I did try a little bit, including this pumpkin pie-flavored sample that was so fresh that it hadn’t even completely set yet.

I’m definitely not the sort to throw a healthy-eating or exercise program out the window just because I’m out of town, and I didn’t do that on Mackinac Island. It was definitely a successful few days in regards to staying healthy and making good choices, while also enjoying all the fun that a vacation is supposed to have.

One more goofy picture: My sister and I, after getting thoroughly spooked in the Haunted Theater on Main Street. Boo! 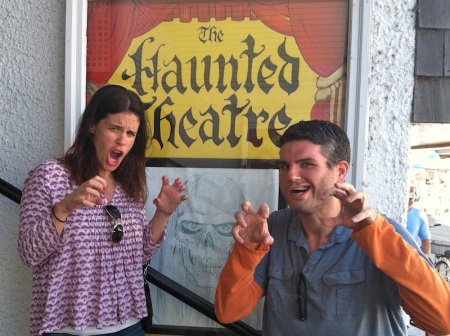 Next Up: More photos and stories from my trip to Michigan, including my visits to St. Joseph and Saugatuck, two towns in the southwestern corner of the state.

This entry was posted on Monday, July 7th, 2014 at 1:48 am and is filed under Uncategorized. You can follow any responses to this entry through the RSS 2.0 feed. You can leave a response, or trackback from your own site.

4 Responses to A Few Days on Mackinac Island