NEWS FLASH! I’m a nerd. A great, big, Urkel-sized nerd. Well, thanks to my weight loss, I’m not as big a nerd as I used to be, but I’m still a nerd, and I’m proud of it. I don’t consider ‘nerd’ to be a derogatory term – I just think it means that I know what I like and am not afraid to express it, embrace it, learn every little thing I can about it, and share it with others.

Long-time readers know one of the things I nerd out about: charts, graphs and statistics. This weight loss journey I’ve been on has been well documented by all of these things: I have a weight loss chart that I update once a month. I have a running chart (more on this later). I track StairMaster workouts with a chart that I call my Skyscraper Collection (more on this later, too!). Even though I haven’t blogged about it lately, I keep statistics on my workouts in the form of Monthly Progress Reports. Long story short (or is it too late for that?), if I can monitor what I’m doing and how I’m doing it in a fun, interesting way, than I’m all for it.

I find all these charts incredibly beneficial. They provide concrete evidence of my improvement in areas like running and stair climbing, both of which are still rather new to me. They allow easy ways for me to look back at where I’ve been, and help me project where I can go in the future. They assist in the setting of both short-term and long-term goals, whether it’s training for a big race or event, or helping me plan my week so I get in enough workouts. They give me a reason to pause, smile and congratulate myself on a great week or a great workout, and offer the opportunity to immortalize that feeling of pride and accomplishment by creating a permanent record of it. They fuel me. They push me.

There’s a new chart in my life, and I’ve kept it a secret from you for months. I keep it on the wall in my office, and it occurred to me the other day that there’s no reason for it to be a secret anymore. Here’s the story behind this new chart, which I’m going to unveil today.

A few months ago, I signed up for my third 10k race, and started focusing on my training for it. I hadn’t done much running lately, so I made the decision to keep the pressure to a minimum. As I explained in this post, my return to running didn’t start off great, but I got back into a groove. One of the things I did to alleviate pressure was not update my running chart. I didn’t want to focus on miles, pace and speed, I just wanted to hit the streets and find a rhythm and feel good. But, at the same time, the nerd alarm was at full blast in my brain: what can I do to somehow acknowledge all this running?

And then, after the first two runs, I had my light bulb moment: I’ll create a map! I was doing all my running after work, in the neighborhoods around my office, so I printed out maps of that area, and after every run, I marked my route. Such a simple idea, but a really effective one, because it continually pushed me to switch things up and run new routes, so I would have new streets to mark.

But, at the time I started this map, I still hadn’t shared on this blog where I was working, because, for the sake of my own sanity, I wanted to separate work life from blog life. I’m also mindful of not sharing certain specifics for general safety and privacy reasons. But my recent appearance on national television blew the lid off of all this, and now that the information about where I’m employed is out there, I have no issue sharing my map.

The orange square in the center is the entire block that my office is on, and, as you can see, I’ve fanned out in every direction over the course of the past couple months. I’ve run past Los Angeles landmarks, like Paramount Studios, the Capitol Records building, and along the Hollywood Walk of Fame, and up and down more residential streets than I can care to name. I’ve tried my hand a few times at running up the Hollywood Hills (the squiggly orange lines at the top – they’re steep!), and crossed over and under the Hollywood freeway more times than I can count. It’s getting harder to add to the map, because I have to run farther to get to streets I haven’t been on before, and I have to remember what those streets are when I’m out on the sidewalks!

I love this map. It’s one of the reasons I’ve kept running, even though that 10k I was training for is long over (read my recap here!). And I suspect I’ll continue updating my map in the weeks to come!

In other workout-related news, I had two great workout this weekend. On Saturday, I took Richard Simmons’ class at Slimmons. On Sunday, I went to the gym, where I did 33 minutes on a bike, and 16 minutes on the StairMaster. I climbed 66 stories during those 16 minutes, which means it’s time to do something I haven’t done in a while… add a skyscraper to my collection!

Today’s skyscraper is in honor of my cousin, who is just finishing up his first semester in college thousands of miles away from home. He’s attending a small school in North Carolina, so I decided to add the tallest building in that state to my collection. Here is it, the Bank of America Corporate Center: 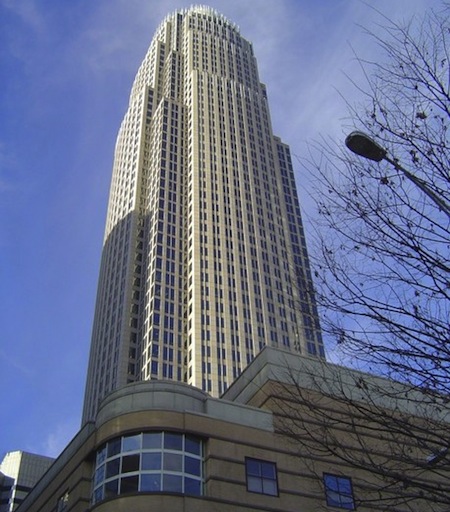 Yep, I climbed that! It’s 60 stories high – a few under what I climbed on the StairMaster, but who cares. Some other facts:

Time to go add it to my Skyscraper Collection!

This entry was posted on Monday, December 17th, 2012 at 12:46 am and is filed under Uncategorized. You can follow any responses to this entry through the RSS 2.0 feed. You can leave a response, or trackback from your own site.