Yesterday, I boarded an airplane for my flight back home from Denver to Los Angeles.  As I was settling into seat 21C, I looked up and saw a very large man making his way down the aisle.  He was over 6 feet tall, and probably over 350 pounds  He was walking sideways, sort of, at an angle so he wouldn’t collide into every seat as he walked passed them, with his arms up, his elbows above the headrests.  His eyes were darting back and forth, registering which aisle seats already had people sitting in them, and taking care as he passed, so he wouldn’t bump into them.  When he got to me, he paused, checked his ticket, and sat down across the aisle, in seat 21D.

I was sitting across the aisle from my former self.

It’s not easy or comfortable to fly when you’re 400 pounds, as I was before I began losing weight.  I hated every moment of it, starting from my arrival at the gate.  This is when I would start looking around and sizing up the other passengers – literally.  I would look and see if there was anyone else as big as me.  More often than not, I would be the biggest person on the flight, and all I could think was that everyone else was noticing me and hoping that they wouldn’t be sitting next to me.  Maybe they’ve sat next to obese people before.  Maybe they’ve had to experience now rolls of fat spill over the armrest and into their space, sometimes making it difficult to operate the controls of the little TV in the seat back in front of them.  I used to think, as we waited to board the aircraft, that I can’t blame those people that were hoping I was in some other row.  I wouldn’t want to sit next to me either.

When booking air travel, a top priority was not to book a middle seat.  Window or aisle was always preferred, and I would oscillate between which I wanted more.  If it was a red-eye or a long flight where I would want to try to sleep, I would pick a window seat, so I could shift my weight slightly, and lean against the side of the plane the entire time.  That way, I would be doing everything I could to keep all parts of my body in my seat and my space, instead of intruding in the space of the person sitting next to me.  But if the flight was shorter, or during a time when I knew I probably wouldn’t be able to nap,  I’d pick an aisle seat.  In an aisle seat, I could stick one of my long legs into the aisle, which felt nice, and I could shift my weight slightly and lean into the aisle, as to not bother or intrude in the space of the person next to me.  This, by the way, is an excellent way to get smacked by the drink cart every time it passes.

Ultimately, it was lose-lose, because I was never comfortable on a plane.  I couldn’t lower the tray table, because my gut was too big.  I had to sit the entire time with my arms somehow crossed (which made reading a book challenging), because I couldn’t let them rest at my sides, as my sides were already pouring over the tops of the armrests, so resting my arms over that would put them fully in the seat (or the lap) next to me.

Worst of all was the seat belt.  I was too big for the seat belt.  It’s been years and years since I could wrap it around me and click it shut.  I would have to ask for a seat belt extender, which was always a mortifying experience, because I was certain everyone within four rows of me could hear me and were judging me.  I used to love the flight attendants who would just smile or nod when I asked them for one, and then, minutes later, just slip one to me nonchalantly as they walked by, without even making eye contact, like it was a drug deal or a hand-off in a spy movie.  Finally, about 6 years ago, I got tired of drawing attention to myself, and just stole a seat belt extender.  It became a permanent item on my checklist when I was packing.  Cell phone charger?  Check.  Toothbrush?  Check.  Seat belt extender?  Check.

Yesterday, I wondered if the man sitting in 21D was thankful for the considerate flight attendant on our flight, who was very discreet about delivering a seat belt extender, although I did catch the transaction out of the corner of my eye.  I know I smiled at that moment, and, to be honest, my eyes watered, because I had just buckled my seat belt minutes before, and I didn’t need a seat belt extender.  I left it at home.  Now that I’ve lost nearly 150 pounds, I can fit in the regular seat belt just fine, and with room to spare! 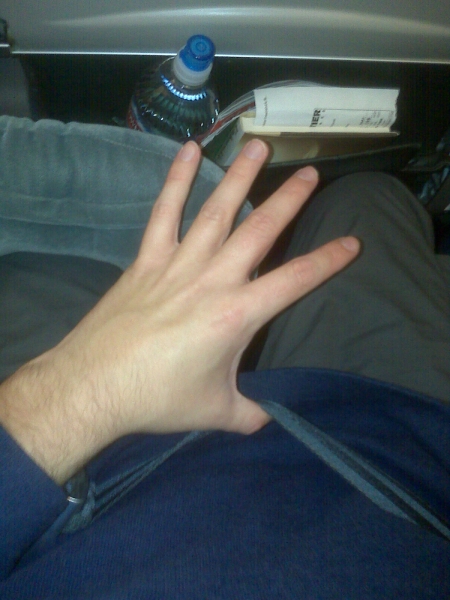 I know I’m never going to be really comfortable on planes.  I’m 6’4″, so my legs will always be cramped, and the head rest often hits me at my neck.  But, boy, how things have changed.  When I stand in the terminal, I don’t feel like all eyes are on me.  I can lower the tray table completely.  My body fits comfortably between the armrests, and no parts of me spill over the tops of them.

PS – This is my 100th blog post.  A big thank you to all my readers out there – I appreciate your love and support!

This entry was posted on Sunday, November 28th, 2010 at 3:07 pm and is filed under Uncategorized. You can follow any responses to this entry through the RSS 2.0 feed. You can leave a response, or trackback from your own site.