What’s In The RediSetGo? Part Fourteen

A few weeks ago, I ordered it.

Two days ago, it arrived.

Last night, I used it for the first time.

Which means the only thing that’s left is to play, for the first time ever with my new RediSetGo, the game that keeps people up at night and gathers them at the watercooler in the morning: What’s in the RediSetGo!

We’ve played this game many times before with the old RediSetGo, before it started peeling and flaking with overuse.  In fact, you can easily read Parts 1-13 – they’re archived and you can access them by clicking on My Favorite Posts at the top of the page.

If this is your first time playing, then welcome to your new addiction!  It’s easy to play – you’ll pick it up quickly, I promise!

Ok, then!  Let’s do it!  Call a sitter and drop Fido off at the kennel, because here we go!

ROASTED TURNIPS are in the RediSetGo!

I’ve been wanting to make these for a while now, and that’s thanks to my friend Heidi.  Heidi and her hubby Tom invited me and some others over way back in March for a delicious meal (read about it on Heidi’s blog), and one of the things they prepared was roasted turnips and carrots.  Basically, turnips can be sliced and baked like fries, and they get crispy on the outside, and creamy in the middle, and they were spectacular.  Heidi had done her research, and presented us with this fun fact that stuck in my mind:  1 cup of fries at McDonald’s has over 700 calories.  1 cup of turnip fries has under 40.  Wow.

So when the new RediSetGo arrived the other day, I knew I wanted to inaugurate it with something I hadn’t made before… and the turnips popped into my head!

Here’s a turnip, in case you aren’t familiar: 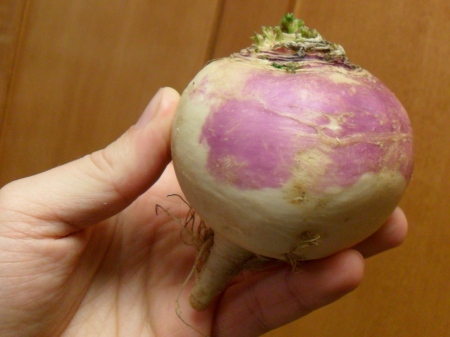 I bought three of them at the store, and I went for smaller ones, since I live solo:

I chopped off the ends and peeled ’em, which was a breeze with my new peeler: 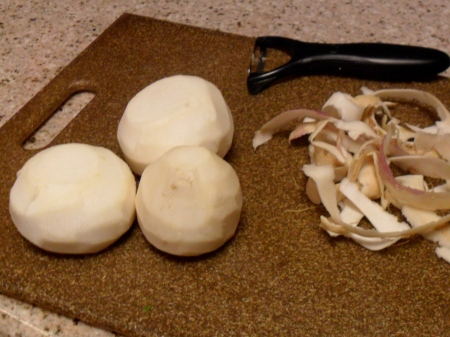 My dad can peel an orange with a paring knife and end up with 1 continuous peel, and that used to really impress me as a kid (and it still does).  I used a peeler instead of a knife, and turnip skins are much thinner than orange rinds, but I got a couple lengthy peels that I’m proud of: 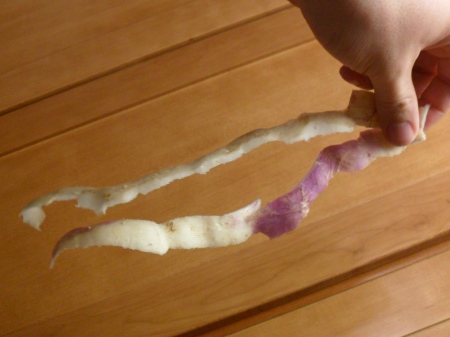 I was so proud I set them aside while tossing all the other peels  into the trash.  Then, a minute later, I thought: ‘What am I ever gonna do with these?’ and they quickly joined their shorter friends in the trash, too.

Next, I cut the turnips into steak-fry-sized pieces:

Then I gave the RediSetGo a spritz of cooking spray, and loaded up a layer.  I ended up doing two batches, and they both cooked for fifteen minutes, with me flipping them about halfway through (actually, a little later than halfway for one batch… time got away from me).

When they came out, I hit them with a little Mrs. Dash, and a touch of paprika, just because I like paprika and haven’t used it in a while.  Here’s both batches: 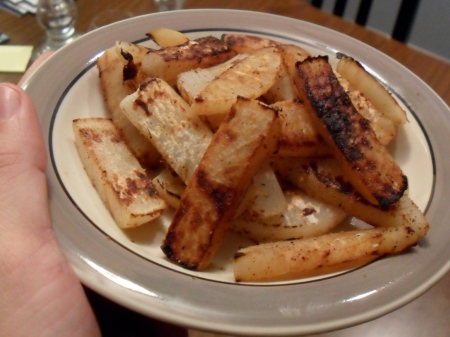 I have enough raw turnips left over for a third batch, which I’ll whip up another time!

So… how do they taste?  Good!  They’re not quite as crispy as they would be in an oven, but they’re pretty good considering they were done in 15 minutes.  If you aren’t familiar with turnips (like me, up until about a year ago), they’re very mild – I once read on the interwebs that they tasted like a cross between a potato and a carrot, and that seems about right.  Which means they’re the perfect vegetable for fries!  And, as Heidi has pointed out, turnips aren’t counted as a starch, like potatoes are – they’re a vegetable!  So eat your turnips, people.  I’m going to keep eating mine.

Welcome to my kitchen, new RediSetGo!