Two topics today – one about seafood, and one about my chart.  Let’s start with seafood!

1) Squid.  Remember my mystery food from the other day? 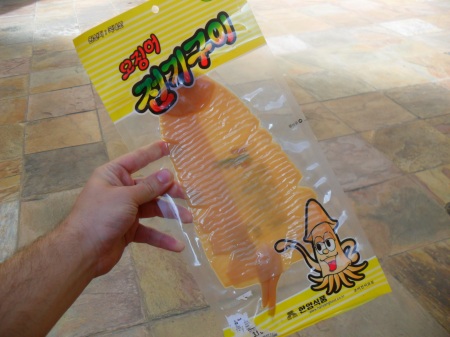 A bunch of you shared the post with your friends and wrote comments that overwhelmingly confirmed it to be dried squid.  A few of you said it was comparable to squid jerky.  I do love jerky, so I wasn’t nervous or frightened to try it, but I wanted to wait until a time when I could document my trying it with photos…

…and that time was this morning.

I think I know how to write “Tear Here” in Korean:

I cut off the top piece…

…and cut a smaller piece off of that… 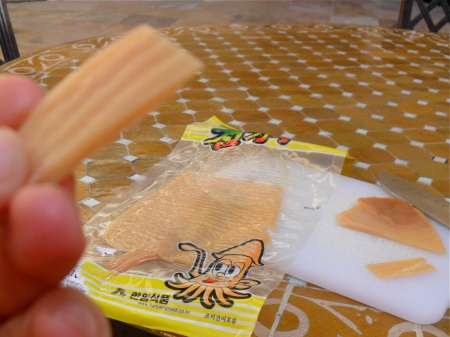 It was chewy.  That wasn’t a surprise, either.  All jerky is chewy, and squid is chewy, no matter the preparation (and I’ve had it raw, fried, sauteed, and a few other ways, too – I don’t shy away from squid on menus!) – herego, squid jerky is chewy.  Makes sense.

More importantly, it was pretty tasty!  It wasn’t nearly as fishy-tasting as I thought it’d be, based on its smell, and while it was a tad salty for my liking, it wasn’t unbearable.  It was probably less fishy-tasting than the salmon jerky I tried a few months ago – and definitely less salty.  I ate another piece nearly immediately.

Then I unwrapped and chopped the rest of it unto smaller pieces, and put them in a Tupperware:

And I preserved part of the packaging for the underside of the Tupperware:

And now my squid jerky lives in my cupboard, in a spot that’s conveniently next to my turkey jerky:

2) Chart Update.  I weighed myself this morning.  I had a good, but not stellar, week.  Last Tuesday was a rest day, exercise-wise, and then Thursday ended up being workout-free as well, because I was so exhausted from work stuff – my last week at my last job was a very busy one.  I worked out every other day, though – and 5 days out of 7 is not bad, not bad at all!  I had a busy weekend, too, that involved a couple BBQs and a surprise picnic, and I made mostly good choices at those events.  Mostly.  Anyway – long story short (or is it too late for that?), it would have been nice to see a loss this week, but I wasn’t expecting one…  and I didn’t get one:

But staying the same is wonderful, so I’ll take it, gladly.  For any newcomers, my weight of 237 pounds represents a weight loss of 165 pounds!

What’s that, you say?  Did you notice something new about my chart?  Apart from the misplaced dot from a few weeks ago that I never got around to fixing (and now probably won’t)?

Why, yes!  I did have to start an EIGHTH PAGE!

I wish I could have started an eighth page with a weight loss, but that just wasn’t in the cards for me this time around – coincidentally, I started both my seventh and sixth pages on plateau weeks, too.

After hanging the eighth page, I looked back at the 7 pages that were already up on the way, and I focused on the line that traverses through all of them, tracing the 165 pounds that I’ve lost so far…  Wow.  This process has been long, and difficult, and even though lately I’ve been stuck, I have come a long way.

Which means there’s only one thing I can do.  And that is to (can we all say it together?):