I went to Universal Studios Hollywood yesterday, and as I was leaving, they were shooting the entertainment news show “Extra.” I watched the host, Mario Lopez, do about ten minutes of intros and promos, and what did I see when I tuned in later that night? I was on TV! 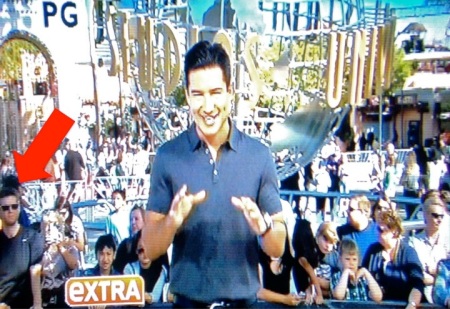 It was just for a second or two, in the lower left corner, but it was cool nonetheless. I don’t know if END_OF_DOCUMENT_TOKEN_TO_BE_REPLACED

This may be hard to believe, since I’ve written so much about it over the past few days, but that 10K I ran on Sunday morning wasn’t my only weekend activity. On Saturday night (the night before the big race), I was invited to a potluck, and you know me… I love an excuse to try out or create a new recipe.

I decided to bring a salad. I’m good at salads, and my Saturday before the potluck was kinda packed, so it was something that could come together relatively quickly, and I wouldn’t have to worry about it staying hot. I found an idea for a dressing and another element that sounded good in The Farm to Table Cookbook (which I modified, naturally), but the salad they recommended serving it on sounded kinda blah. And since cole slaw seems like a very potlucky-type dish, I decided that was the way to go.

This dish has a really long name. Are you ready? Here’s how I made my…

Whew, that title is a mouthful!  This recipe makes a lot of salad, so you may want to consider halving it before you commit to buying ingredients.

Preparations began on Friday night. First thing on the to-do list: Balsamic-Soaked Currants. Currants are a variety of small raisins that date back to ancient Greece. They look like raisins and taste like raisins, but they’re called currants so stores can charge more for them (just a guess). I’ve had currants in scones and granola and other baked goods, but this may have been the first time I’ve bought them: 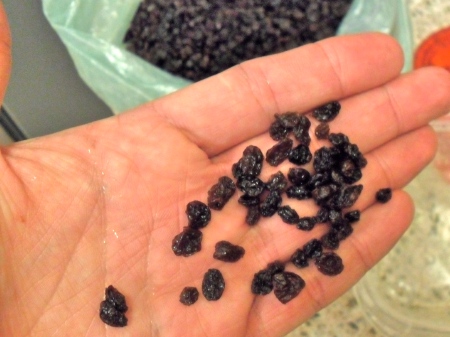 See? I told you they look like raisins. I put about a cup of them in an airtight container, and added enough balsamic vinegar until they were covered:

I let them sit in the fridge overnight, but all they really need is an hour or to. There! Balsamic-soaked currants… done.

I also made the dressing on Friday night. I pulled out my blender, and started with the first ingredient: a Granny Smith apple: 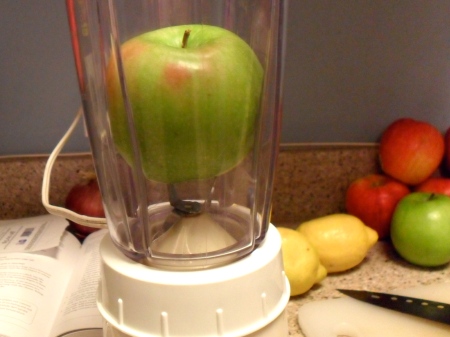 Hmmm… maybe I should peel, core, and chop that apple, huh?

Much better. That’s two cups of apple, which actually turned out to be one and a half Granny Smiths. Then I added all sorts of good stuff:

The Farm to Table recipe called for 1/2 cup of oil, but there’s no way I was adding that much oil, so I modified it, and added 2 tablespoons olive oil, 2 more tablespoons vinegar, and 1/4 water. Blend it until it’s smooth, and you end up with:

It’s the curry that gives it the fantastic color!

The last thing I did on Friday night was toast some pecans. I forgot to take pictures, but I threw about 2 cups of pecan halves in a 10″ skillet (no need for oil, butter, or spray of any kind), and put them on medium-low heat for about 5-7 minutes. You know they’re done when you can smell ’em! And they smell great!

On Saturday, all I had to do was assemble the salad, which involved a lot of chopping. First item on the cutting board: cabbage:

That’s a savoy cabbage, which has leaves that are more wrinkly than regular green cabbage. I removed and tossed the outer-most leaves, chopped it in half, cut out the thick core, and chopped it up:

The entire cabbage went in the bowl. I wanted a little color and variety, so I also added 1/2 of a red cabbage:

Then, about 6 or 7 stalks of celery, chopped: 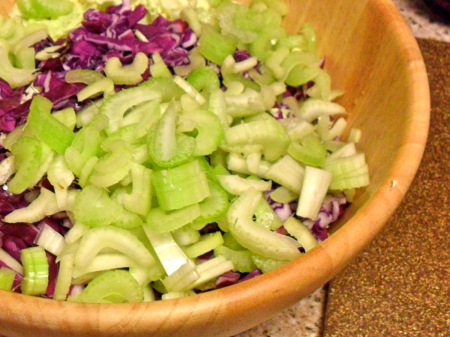 And half of a red onion, sliced. A little onion goes a long way:

Next up, more apple. I wanted to buy Braeburn, because I’ve read that they’re the most resistant to browning, and I thought I bought Braeburn, but when I got home from the store, it turned out they were Honeycrisp. I guess I wasn’t paying attention to the signs in the produce section. Or maybe they were mislabeled. Either way, Honeycrisps are great apples – firm and crunchy and sweet – so I chopped 5 of them. I left the skins on, to add color.

Time for the finishing touches! I pulled out the currants, which had been soaking up the balsamic all night, and started scooping them out with a slotted spoon:

These are pungent little fellows! Sweet, with a balsamic kick – very tasty. I put about half of them in the bowl, along with half of the pecans. I added the dressing…

…and tossed it all together. Then, I sprinkled the other half of the currants and pecans on top, to make it purdy. Wanna see the final result?

I added a sign so everyone knew what they were getting into:

That’s painters’ tape, so the bowl doesn’t get damaged.

The potluck was a lot of fun. I met a lot of new people, and I think the slaw was a hit. People seemed to be eating it!

I bought too much cabbage, though, and there’s still 1/2 of a red cabbage and an entire second savoy cabbage in my fridge. Another slaw may be in my future…

What’s In The Crockpot? Part Four

I pulled out the crockpot again over the weekend, to make something for the Halloween potluck party I was invited to, and the results were devilishly delicious. Monstrously magnificent. Bloodcurdlingly beyond compare.

OK, enough with the Halloween talk.

Never played “What’s In The Crockpot?” before? Don’t fret. You’ll pick it up as we go along – although, if you’d like some practice, check out these three posts first.

All set? Wonderful. Put on your reflective clothing and wear a jacket if it’s chilly, because it’s time to play!

WHAT’S IN THE CROCKPOT? 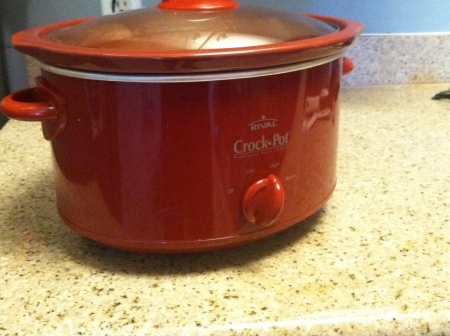 GHOULISHLY GLAZED CARROT, PARSNIPS & EYEBALLS* are in the Crockpot!

It couldn’t have been easier to make, either.  First ingredient? Carrots:

Parsnips are relatively new to me – I don’t think I’d ever had one until a few years ago. They’re kinda like a cross between a carrot and a potato: similar in shape and texture to a carrot, but similar in taste to a potato. Meaning, of course, that they taste like nothing and are disgusting raw. But, like potatoes, they take on flavors well, and so I added some to this recipe (3 cups worth) just to mix it up.

So, to recap, that’s 5 cups of carrots and 3 cups of parsnips in the crockpot:

If you don’t like parsnips, leave ’em out. If you love parsnips, add more! Aim for around 8 cups of veggies, and you’ll be fine.

Now for the glaze. I started with 1 cup of orange juice, and to that I added 3 tablespoons of honey: 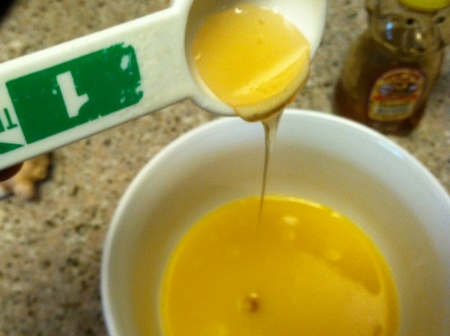 Here’s a tip: if you spritz your tablespoon with Pam before measuring out the honey, the honey won’t stick to the spoon, and all of it will end up in your recipe.

Next, I grated some fresh ginger – about a teaspoon’s worth (although I didn’t measure it, so I can’t be absolutely sure):

I also added 1 teaspoon of cinnamon, and 1/4 teaspoon each of salt and pepper: 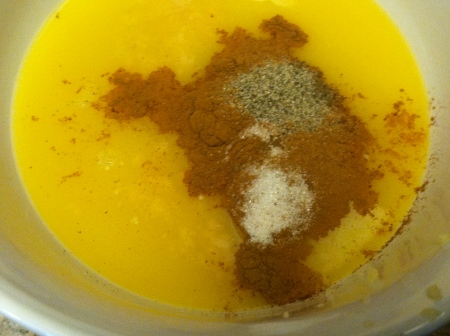 I gave it a stir and poured it over the veggies in the crockpot:

I set the crockpot for 4 hours on High, and that’s it! They’re done! Because crockpots leech the liquid out of everything, the glaze was a little thinner than it would have been had you made this same recipe in your oven, but give the dish a good stir before serving and it’s fine.

I made a display card for the potluck:

A day later my cousin had the wonderful idea that I could have actually included eyeballs in the recipe had I thrown in some pearl onions. Dammit – why didn’t I think of that? I was able to put the calories and fat on the card because I had figured it out using an online recipe calculator. The full details:

Tomorrow, I’m sharing picture of my Halloween costume (it’s a good one!). And now, I’m off to the gym!