I’ve landed in the Great Lakes State – my home state – and I’ll be here through the day after Christmas. Then it’s off to a whole different part of the world… but that’s an announcement for a whole ‘nother day! 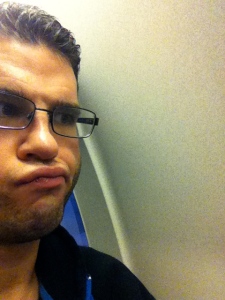 My flights today were great. I had a short layover in Phoenix, and, during the Burbank-Phoenix leg, I had a window seat… except that, as you can see in the picture, I got gypped out of a window! From Phoenix-Detroit, I had an aisle seat, which I like because I can stretch a leg into the aisle. Added bonus today: the middle seat next to me was empty, so I could stretch my other leg in that direction!

Tomorrow morning I’m heading to a local gym – the same gym I frequented when I was here in September – and seeing what kind of deal they can cut me for a week. In September, they charged me $25 for 2 weeks, so their 1-week rate must be less than that, right?

I’m hoping the change of fitness-related scenery will provide me a little boost. I’ve been struggling lately to motivate myself to work out. Last week, when I was terribly ill with a cold and/or flu, I ended up missing four days of exercise in a row. I’m not complaining – just an observation. It’s the longest stretch of non-exercise I think I’ve had all year. Plus, two days prior to that little stretch, I had a planned rest day, so, in total, I worked out twice that week, instead of an ideal six times.

Normally when circumstances prohibit me from exercising for a day or two, I start feeling antsy to get back in the gym. Apparently when circumstances prohibit me from exercising for four days straight, I lose all interest in the gym altogether, because that’s how I felt when I got healthy and strong enough to resume exercising. My motivation had disappeared quicker than Santa up the chimney! My first workout back after recuperating was a run. I hadn’t gone running since Thanksgiving Day (when I ran my first 5K with my sister), and at first I felt great. About 15 minutes in, though, my tune had changed, and I couldn’t wait to finish. I had pre-determined my route, so I was nowhere near home by that point, so I kept running, and banned myself from checking the time. All told, I spent 41 minutes on the sidewalks of North Hollywood, and went exactly 4 miles. My route:

I calculated my speed at 5.8 mph (and, yep, I’ve added it to my running chart!). Even though I was fairly miserable by the run’s end, I was happy and proud I stuck it out.

The next day (Monday), I hit the gym for the first time in a week, and had a good workout – 40 minutes of weightlifting and 16 minutes on a bike, plus a little warm-up on the treadmill. Today was a looong travel day – I left my house in California at 5am and walked in my parents’ door at 6pm – so no workout. Tomorrow, it’s gym time. I can’t miss many more workouts – not with all the holiday goodies around!

PS – Wondering why I didn’t weigh myself this morning? It’s because I vowed to not weigh myself again until 2012, as a way to combat a developing obsession with my scale. I found a new hiding spot for my scale, and it’s working like a charm! Find out where it is here.

PPS – Remember the micro red amaranth I purchased last week? A few days ago, I included it in a big kale salad I brought to a dinner party:

The salad was simple and easy (pre-chopped and washed kale, tomatoes, persian cucumbers, micro red amaranth, and bottled nonfat balsamic vinaigrette), and it was a big hit. I thought the amaranth tasted a little like lawn cuttings (in a wheatgrass sorta way, not an off-putting sorta way), but a couple of my friends thought they tasted like beets. Or maybe it was just the color that reminded them of beets!

OK – I’m off. Because of the holidays, my posting schedule may be a little erratic, but I’ll be keeping it up, and so should you!

If I had to choose a theme for last night, it would have to be flight. Despite feeling under the weather (still), I rallied, headed downtown, and met up with my aunt and uncle at the Ahmanson Theatre, where we saw “Bring It On: The Musical,” a new show based on the Kirsten Dunst movie from about 10 years ago. “Based on” is being generous – the musical has an entirely new set of characters and a new plot, and the only resemblance it bears to the film is that they’re both about rival high school cheerleading squads. But I digress – “Bring It On” is an incredibly enthusiastic, high-energy show, and boy, do those actors fly! The show is heavy on dance, and in all the big numbers, people are tumbling and flipping and sent twirling 20 feet in the air. Here’s the commercial that’s been airing in LA:

I can’t imagine how many calories those performers burn during each performance! Los Angeles is the first stop of a coast-to-coast tour – you can find if it’s coming to your town on the website. It’s a really fun show: big, colorful, and at times, clever. Don’t expect intricate characters, nuance, or subtle storytelling – every element in this show is as simple and in-your-face as it can be.

After watching cheerleaders take flight for two and a half hours, I headed to the subway station to catch a train home (Yep, L.A. has a subway – it’s called the Metro). The Civic Center station, the closest one to the theater, has an art installation that I’ve never much paid attention to before – a series of life-sized figures flying above the platform:

According to the information I found on the Metro’s website, the figures are “an interpretation of the artist’s [Jonathan Borofsky] dreams of soaring above ground:

“I’ve had quite a few flying dreams in my lifetime. Many other people I’ve spoken to have had similar dreams. Sometimes I fly above it all, serene and rather enlightened…other times my flying dreams seem more like an escape from earthly concerns.”

I’ve had flying dreams before. I had one a couple weeks ago, in fact. I can’t remember many of the details now, except for that it was cloudy, and I was up amongst those clouds, and every time the clouds parted, I could see some place from my past: my back patio at my grandparents’ house, the little lake where we used to have a motorboat when I was a kid, the stoop of the building where I had a majority of my college classes. There were other people in the dream, but I can’t recall who, or what the tone of our interactions were.

My time on the train was spent thinking about what I would need to take flight. I’d need the ability to fly, obviously, but what else? I’d need courage. There’d be many inherent dangers, so courage would definitely be needed. I’d also need determination. It wouldn’t be easy to fly (I presume), but if I were determined, than I could brush off any trials and attempts as part of the process. Lastly, I’d need momentum. Even at my greatly-reduced weight of 236 pounds, it’d take some propulsion and thrust to get my body airborne. There’s a reason why runways are a mile long (and, no, I’m not comparing myself to an airplane).

The keys to so many things, aren’t they? None of them are easy to come by, and all of them can be even harder to hold on to. I wrote those three words on a post-it, and that post-it is now stuck on my bathroom mirror, where I’ll see it every morning. It’ll be a daily reminder that if I work on building and harnessing those three attributes, what I think is impossible may soon come within reach.

Another day, and I feel even better about getting myself back on the wagon.  It’s funny how, when I don’t have any momentum, I always conveniently forget about its exponential qualities.  Similarly, once I get a little momentum, I’m always pleasantly surprised at how it seems to grow, like a snowball rolling down a hill.

This week may have started out crappy, but now that I’ve had two good days in a row, I feel like I’m on a roll.  That, my friends, feels great.  How come I never remember how awesome having momentum feels?

My food today was pretty good.  There were tons of fruit and vegetables involved, a little oatmeal as part of my breakfast, good lean proteins (soy beans, garbanzo beans, and grilled chicken breast), and I even had a bagel as part of my lunch.  When I started feeling the urge to snack, mid-afternoon, I opened a Tupperware, and munched on more veggies.

This evening I had plans after work, and after that, I was gonna hit the gym.  I thought I’d only be busy for 60 or 90 minutes, providing ample gym time before it was time to hit the hay, but I ended up being occupied for a little over 3 hours.  So the gym didn’t happen.  I’m okay with it, too.  What I really should start doing is getting in the habit of going to the gym before going in to the office.  I gotta work on that.

I have one more thing I gotta do before I turn in for the night – and that’s to pack tomorrow’s lunch.  Gotta keep this momentum going!