I Eat These All The Time… But When I Saw Them Like This at the Store, I Had No Idea What They Were!

Anyone have any idea what these are?

I was stumped. Clearly pods of some kind, a little bit fuzzy, a little rounder and fuller than soybeans. It took me a moment to even find the sign, before I realized  END_OF_DOCUMENT_TOKEN_TO_BE_REPLACED

I’m being held hostage in my own home, by my dryer:

On Tuesday night, when I turned on my dryer, I could hear the motor whirring, but the drum wasn’t spinning.  Then, yesterday, the motor didn’t seem to be working at all.  Fantastic! I scheduled a maintenance visit, with the technician coming between 8am and noon today.  It’s now 12:20, and they haven’t come yet.  I just called, and they’re saying an arrival time now around 1 or 1:30pm.  We’ll see how that goes.  Oh – here’s the kicker!  Who has two thumbs and a dryer warranty that expired about 2 weeks ago?  THIS GUY. Just my luck.

One of the things I need to do today is go grocery shopping.  My fridge and cupboards are practically bare.  For breakfast, I polished off the last of the personal watermelon I bought last week (about 3-4 cups worth), a kiwi, some wheat toast, and I juiced an orange.  Lunch was a trickier matter.  I have a head of cauliflower that’s been staring at me from my vegetable drawer for the past few days, but I’m kinda sick of cauliflower.  I’ve bought 3 heads over the past month or so, and ended up just chopping the first 2 into florets and eating them raw.  But I gotta make do with what I got – so I decided to whip up a make-it-up-as-I-go-along cauliflower mash.

Breaking News: The technician is here!  I’ll resume this post shortly.  Thank you for holding.

Breaking News Part Two: Guess who has a broken belt on his dryer?  I do!  Apparently it’s not uncommon on Samsung dryers like mine.  The parts needed aren’t in stock (of course) and they’ll take 5 business days to arrive (of course), so I better string up a clothesline until then.  I think I’ll manage just fine – luckily the dryer broke just as I had finished a couple loads of laundry.  And I was really hoping to spend $200 right now on one of my appliances, so I’m just elated that it’s all working out for me.

Then the cauliflower went into my food processor.  I wanted to add a little protein, so I added in half a can of garbanzo beans:

And pretty much the rest of the cilantro in the fridge: 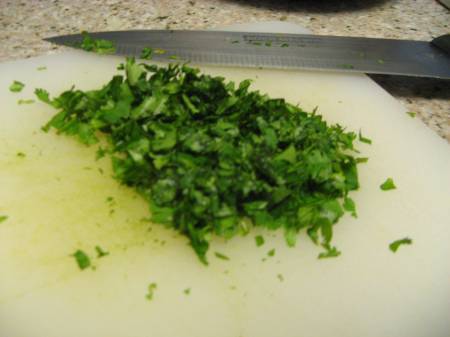 Once my food processor did its magic, this is what I had:

I wanted to add something creamy, and this is where my bare cupboards didn’t help me.  Some nonfat Greek yogurt would be perfect, and skim milk would do fine also, but I was out of both.  I have lite mayo, but that didn’t seem like a good idea.  So I settled on about 2-3 tablespoons of Lite Caesar Salad Dressing:

For a flavor boost, I also added about a teaspoon or so of this salad dressing mix that I had bought for a recipe I made a few months back: 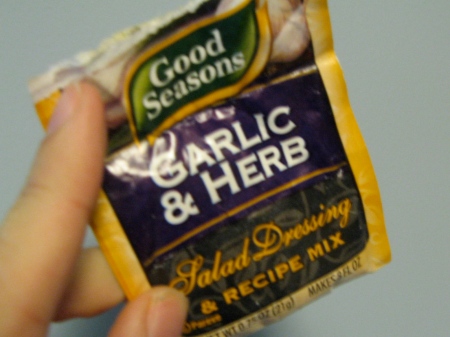 Mmm… garlic and herbs.  I mixed it all up, and served me up a bowl, with a few cilantro leaves as garnish: 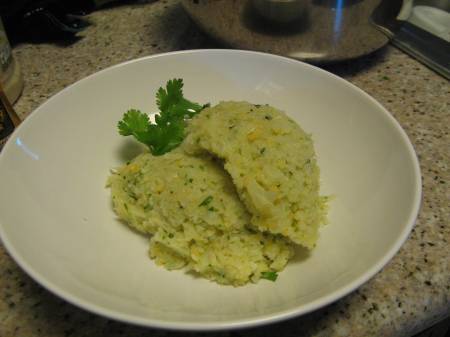 It was pretty good, especially given the impromptu nature of it, although if I had to do it again, I’d maybe swap out the Caesar dressing for some Greek yogurt.  I’m glad I liked it, because I have enough left over to last me a couple days.

Tonight I’m going to Latin Jam class for the first time in about a month.  I didn’t make it for a few weeks due to the craziness of my most recent job, and last week I had another conflict, but I’m really looking forward to tonight!  And since one of my favorite supermarkets, Super King, is in the neighborhood, I think I’ll stock up there.  No cauliflower, though.