I’m writing this blog post from a whole different state than usual – Colorado! After waiting around the Burbank airport thanks to a 2-hour delay, I finally boarded a tiny little 45-seater regional jet, which didn’t afford enough headroom for me to stand up straight in the aisle. No place to put my head except to tilt it to the side: 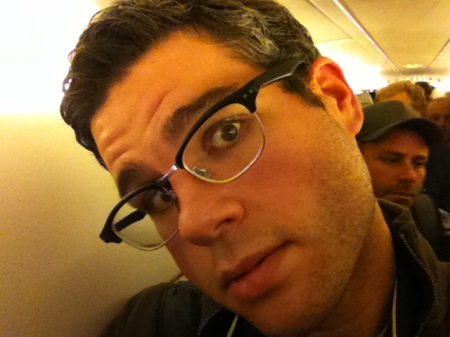 There was a perk to the whole situation, though: the delay forced whoever was seated next to me to rebook their travel, so… empty seat!

When you’re 6’4″ and on a regional jet (or any type of aircraft, for that matter), you’ll gladly take any extra elbow room you can get! Since I’m on the subject, if you’ve never read my post “How A 400-Pound Man Flies,” take a few minutes and read it. It’s about the misery of flying when you’re as heavy as I was, and even though it’s a year old, it’s still one of the posts I get the most feedback about. CLICK HERE TO CHECK IT OUT.

My brother-in-law Justin picked me up at the airport, and there was a surprise when we got back to the house: 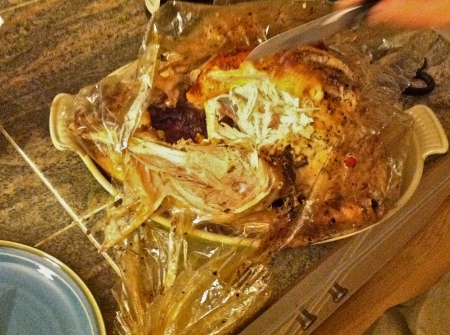 A 12-pound turkey! I won’t bore you with the specifics, but Justin accidentally ended up in a situation where he had a cook a bird today, in addition to the bird he’ll cook for Thanksgiving. I’m not complaining – Justin loves Thanksgiving and is great in the kitchen, and this bird was incredibly delicious. I picked off a few pieces before Justin carved it up. Between this trial-run turkey and the Thanksgiving turkey, there will be 24 pounds of turkey this year, and, um, 8 of us (I think) at Thanksgiving dinner – and two of them are 5 or under. Tis the season!

My other eating today was good. Due to the flight delay, I ended up getting a salad at the airport, and earlier in the day I had a healthy breakfast and lunch that were based around consuming some of the produce I had in the house before splitting town for 6 days. One of the items I ate was…

I mentioned this guy in my last Produce Haul post – there was a stack of them at Whole Foods, and I had never heard of Pippin apples before, so I bought a couple to give them a whirl (as I’m prone to do).

Before digging in, I looked around online, and got a little history lesson on the Pippin. It originates from France, and has been around for centuries. Shakespeare references a Pippin apple in Henry IV, and they were very popular in colonial America. They were actually were the first variety of apple to be exported in bulk back to England, after gaining popularity there due to Benjamin Franklin sharing samples on one of his trips across the pond. Pippin were also one of Thomas Jefferson’s favorite apples, which doesn’t surprise me in the least – I learned from Bill Bryson’s excellent “At Home” that Jefferson knew his stuff and had a garden of over 250 types of produce (read more about that here).

And yet, despite their storied history, you don’t see them that often in the stores anymore. At least I don’t. They supposedly are still plentiful and well-known in parts of Virginia (can any Virginian readers vouch for that?), although most are grown in the Pacific northwest.

This was my very first Pippin apple. It seems strange to take photographs of an apple like it’s some sort of bewildering delicacy, but since I do it for all the other new types of produce I try, I might as well do it with the Pippin: 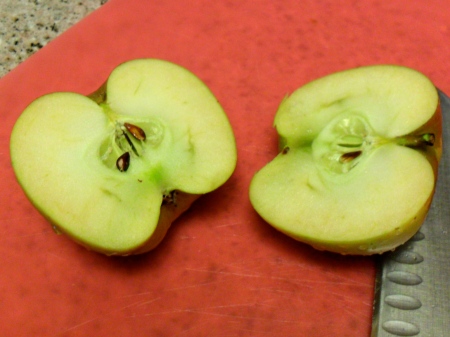 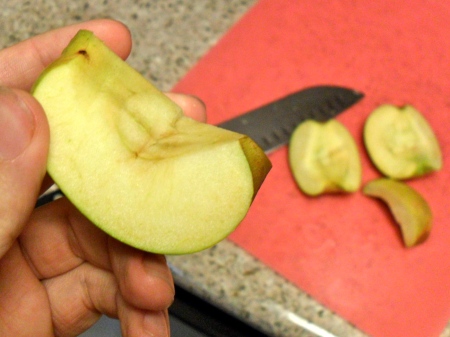 Looks like… an apple. And guess what? It tastes like one, too. It’s on the tart side (which makes sense, because a few different websites referred to it being ideal for pies and desserts), and I don’t mind tart. But I didn’t care for the texture. It was a little on the grainy, mealy side. I don’t know if that’s indicative of Pippins in general or the Pippin I ended up with, but it’s not an apple I’ll be rushing out to buy again. Especially if there’s Honeycrisp or Pink Lady apples nearby.

I’ll finish up with a health update: I’m not 100% better yet (ugh), but I’m feeling pretty good. I’m taking antibiotics for my throat (in case it is/was strep), and it’s still sore, although much more manageable. I’ve discovered Cepacol lozenges, which numb the throat, and they’re a huge help. Today was the first day in a few where I’ve actually had energy, and didn’t want to sleep all day long. So… things are improving.

Oh, and I worked out today for the first time since Saturday! I didn’t push myself – just 46 minutes on a recumbent bike, but it felt great! I had to do something… I’m signed up for a 5K on Thanksgiving Day!