I stumbled across a variety of fruit the other day at the store. The sign said they were Black Velvet Apricots, and my ears perked up. Apricots are one of my favorite stone fruits – they’re the perfect size for a snack, and I can literally tear them in half with my fingers and remove the pit without my hands getting covered in juice. And you know me, I’m a sucker for never-before-seen produce items! So I bagged up 5 of these Black Velvet Apricots and brought ’em home.

END_OF_DOCUMENT_TOKEN_TO_BE_REPLACED

The title of this post is a word I had never seen or heard before, until recently.  If I were to just look at it, I’d think maybe someone misspelled ‘atrium’, or maybe that some clever bazillionaire got a pet ape, and the ape lives in his atrium, making it an aprium.

But because I first saw the word in the produce section of Whole Foods, I knew immediately that it’s a type of produce (yep, I’m a super-genius).  And you know me – I like trying new things from the produce section, so I bought a few.  Ladies and gentlemen, my apriums:

Perhaps some of you have already figured out on your own what I had to look up on the interwebs: that an aprium is a cross between an apricot and a plum.  The name makes sense, huh?  Kinda like when the tabloids smash together the names of two dating celebrities, Bennifer-style (ah, Bennifer seems like so long ago…).

I thought my apriums were a lovely color – 1/2 golden yellow and 1/2 orangey-pink:

But wait… I’m confused.  Aren’t apricot/plum hybrids called plouts?  I bought tons of plouts last summer at the farmers’ market – how are those different from apriums?  And what about plumcots?  What the hell are those?  I remember seeing those at the farmers’ market too (although I don’t remember if I bought them or not).  I needed to get to the bottom of these stone fruit mysteries, and quick!

Turns out, there are differences between pluots, plumcots, and apriums, and it’s all about percentages.  Plumcots are equal parts: 50% plum, and 50% apricot.  Plouts are 70% plum, and 30% apricot.  Apriums, meanwhile, are 70% apricot and 30% plum.   And, of course, because this isn’t confusing enough, there are sub-varieties of each, some of which have pretty fun names, like Dapple Dandy and Flavor Grenade plouts.  There are more than 25 varieties of plouts alone…  so I can keep eating new types of stone fruits all summer!  (And that wouldn’t be a bad thing.)

Back to my apriums…  here’s what they look like inside:

And a slice of one – they’re really juicy: 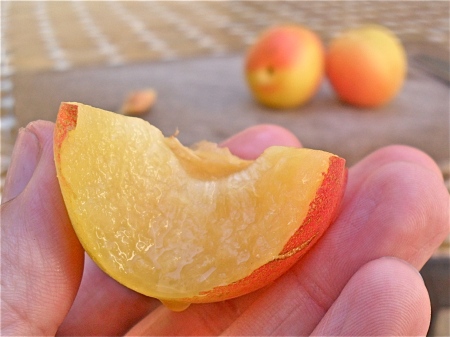 And the taste?  They’re good.  Oddly enough (or not really at all), the best way to describe them is to compare them to their plum and apricot cousins:  despite being 70% apricot, I thought these apriums tasted more like plums, both in flavor and texture, and they’re delicious, sweet, and refreshing.

I’m off to Whole Foods a little later today…  I wonder what I’ll find there next!