Time for Part Two of my Sweden Two-Parter! My first Sweden post focused on food. This one is about everything else, including exercise. And ABBA!

On my first full day in Sweden, Katherine and I headed into Stockholm to check out the ABBA Museum. It’s technically called END_OF_DOCUMENT_TOKEN_TO_BE_REPLACED

Goodies From the Garden (Sweden: Part One)

My first visit to Iceland was actually a long layover… on my way to Sweden! Longtime readers will know I’ve been to Sweden before – this is actually my fourth trip there, and the third since I started this blog. (Hankering for more posts about Sweden? Here’s my archive.)

My friends Katherine and Peter live in that house in the distance, located END_OF_DOCUMENT_TOKEN_TO_BE_REPLACED

Months ago, while talking to Katherine about my upcoming visit, I casually mentioned how cool it would be to climb the stairs at Kaknästornet, the tallest structure in Stockholm. I could be an international stair climber! Kaknästornet is a TV satellite tower that stands 509 feet tall, with a restaurant and bar at the top, and Katherine wanted to climb the stairs, too! 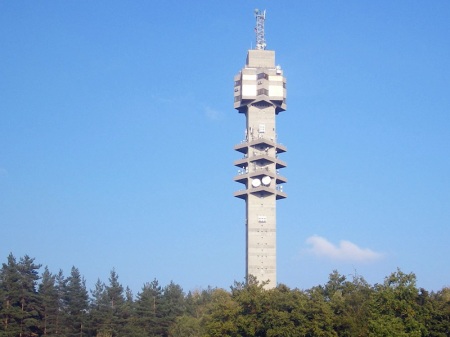 It’s hard to compare height with nothing nearby, and there is literally nothing nearby. Kaknästornet was built in a forest a few kilometers from the center of town.

Even though it’s open to the public, the stairs are not, and I mentioned it to Katherine as a joke, knowing full well access would be impossible. To my surprise, Katherine and her husband Peter actually know a guy that knows guys at Kaknästornet, and they offered to make a call! Perhaps this wouldn’t be impossible after all!
END_OF_DOCUMENT_TOKEN_TO_BE_REPLACED

Sweden, Part Two: A Meal Fit For a Prince

King Carl XVI Gustaf and Queen Silvia of Sweden have three children: Crown Princess Victoria, who tied the knot in 2010, Princess Madeleine, who got married in 2013, and Prince Carl Philip, who became a married man just last weekend. Here I am with the happy couple:

Why am I mapping out the Swedish royal family tree? Because I was in Sweden for all three weddings!  END_OF_DOCUMENT_TOKEN_TO_BE_REPLACED

Sweden, Part One: A Week in the Countryside

A friend reached out, asking if everything was OK, since it had been 10 days since I’ve put up a blog post. I told him I’m great, which is true, and I hadn’t been able to post because I’ve been… in Sweden!

I’m lucky, because one of my END_OF_DOCUMENT_TOKEN_TO_BE_REPLACED

Quick catch-up: I’m in Sweden, visiting friends. I’m blogging about things I love over here. For Items #1-5 on this list, check out this post!

6) Katherine’s Garden. Katherine is one ambitious mofo. She moved out to the country last summer and this summer, she dove right into starting a vegetable garden. And I’m not talking about a single planter on her porch. She’s been building a garden that’s bigger than my entire condo. Here’s Katherine in the midst of her handiwork:

I couldn’t even fit it all in one shot! It’s still very early in the short Sweden growing season, but Katherine has planted END_OF_DOCUMENT_TOKEN_TO_BE_REPLACED

Things I Love About Sweden, Part One

I’m nearing the conclusion of my time in Sweden. Here are some more awesome things about this part of the world. 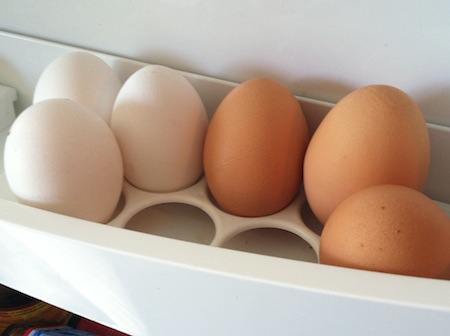 Katherine made us scrambled eggs one morning, and they were probably the best eggs I’ve had in a looong time. I usually very rarely eat egg yolks, but I didn’t hesitate to make an exception: 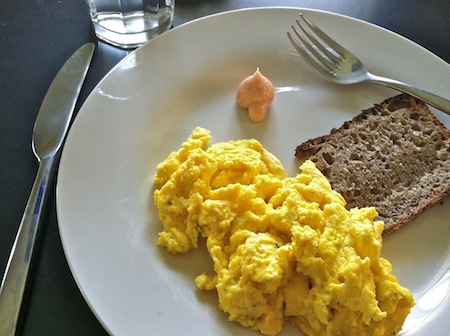 That’s about 2 eggs worth, and the dollop at the top is a Swedish product called Kalles Kaviar, a caviar paste that’s very popular. A little bit goes a long way – it’s very salty – but it’s good. The third item on the plate brings me to item #2: END_OF_DOCUMENT_TOKEN_TO_BE_REPLACED

Swedish lesson for the day: “God Afton” is Swedish for “Good Evening.”

And Sweden is where I am RIGHT NOW! (Congrats to Donna for guessing correctly!) It’s late Thursday evening as I write this, and I arrived Tuesday at noon, after a day and a half of traveling (including the adjustment for time zones). I already have a ton of pictures of share, but before I get to those, a reminder/welcome!

This is my home for a little over a week:

I’m here visiting one of my best friends, Katherine, her hubby Peter, and their two sons, Stellan and Kai. I’ve known Katherine since college, and she moved to Sweden 4 years ago when she married Peter, a Swede. They used to live in Stockholm, but a year ago they moved about 45 minutes out into the country. They have a few acres, and it’s beautiful. This is the view I’ve been waking up to: END_OF_DOCUMENT_TOKEN_TO_BE_REPLACED

Produce Haul AND Imported From Sweden

I came home from my trip the other day to a near-barren kitchen.  Thanks to eating out and some frozen fruits and vegetables, I lasted a day and a half, but then I reached a breaking point.  I needed to go shopping.

Whole Foods to the rescue!

That’s the Whole Foods in Porter Ranch, so if you’re coming to hear me speak there next week (and you’re coming, right?), that’s what the store looks like!

Oh, and look at that!  A promotional poster for my in-store appearance!

Here’s what I ended up coming home with, produce-wise:

It’s a pretty standard haul for me.  I forgot to grab some sort of lettuce or greens, which will make salad-assembly a little more difficult, but that’ll just be at the top of the list for next time.  Plus, I’m a pro at lettuce-free salads, so who’s to say there are no salads in my immediate future?

You may have also noticed that there’s no out-of-the-ordinary produce in that haul either.  I do love buying items from the produce department that I’ve never bought before, but I didn’t even really look this time, and that’s because I just got an influx of new-to-me food items from another source: my friend Katherine.

I’ve known Katherine since college, and she’s one of my bestest friends.  So imagine my sadness when, two years ago, she packed her bags and said goodbye to Los Angeles and moved to Sweden.  Sweden.  And she did it for love.  Love.  It makes me wanna barf.

I’m kidding, of course.  Not about the move to Sweden part, but about it making me want to barf.  I’m so happy for her and the life she has, with a fantastic husband and two beautiful baby boys, one of whom is my Godson.  Plus, when it’s 70 degrees and sunny in January in Los Angeles, I get to think of Katherine in Stockholm, where it’s -10 degrees and there’s only 5 hours of sunlight.  That sucks more than the parking at Ikea on a Saturday.

Anyhoo, Katherine and her family are visiting Los Angeles right now, and I spent all day with them on Tuesday.  Katherine and I took the boys to the zoo, where we saw…

and a napping gorilla… 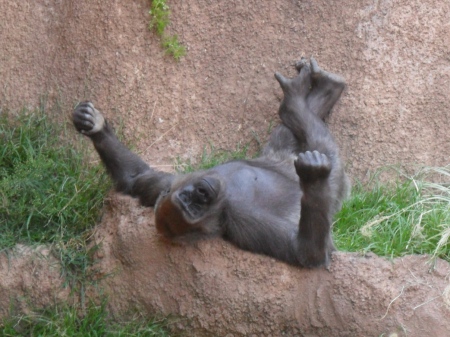 and this animal, which is… um… what lions like to eat…

And the zoo had these great bee exhibits all over the place – wherever there was a trash can, there were bees!  How do they do that?

But I digress.  Time to get back on subject: Katherine brought me presents!  From the supermarket in Stockholm!  I was as excited as a little boy on Christmas morning. 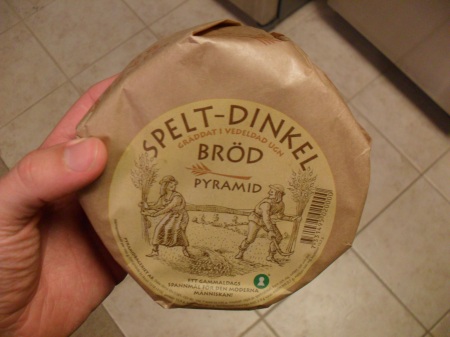 Knäckebröd, which translates to “crisp bread” in English, is a very popular rye-based bread in Sweden.  It’s more cracker-like than bread-like, and it’s been a part of the Swedish food scene since 500 AD.  You can buy knäckebröd is the U.S. (Wasa is a brands I’ve seen in stores), but I haven’t seen it in the traditional Swedish shape, which has a hole in the middle:

The hole is because knäckebröd is traditionally stored on poles or sticks hung above the stove.

And what does one eat with knäckebröd?  It’s commonly eaten with butter and cheese, and it’s also eaten with one of the staples of Sweden cuisine…

Senapssill is herring with mustard.  And who knew that, in addition to giving us “Dancing Queen” and “Mamma Mia”, Abba also was in the herring business?  Swedes sure know how to multitask!

Loksill is herring with onions.  I haven’t cracked open either herring jar yet, but I will!

This came from a farmers’ market in Stockholm.  Swedes eat lingonberry jam all the time, often as a condiment during dinner, on meatballs and stews and dishes like that.  I think I’ll have to make some meatballs soon!

I can’t wait to try all my new foods from Sweden!

OK – I gotta get going… I have a few more things to do before heading off to Slimmons tonight.  It’s my first class with Richard Simmons in three weeks!

An Excursion to Arby’s. PLUS: What I Order at Fast Food Restaurants

Here’s something I don’t write about very often: FAST FOOD! Despite all the big changes I’ve made in my life over the past seven (almost eight!) years, I haven’t eliminated fast food out of my diet completely. Fast food is a rare treat, but it does happen. And like many of the treats I allow myself to occasionally indulge in, I handle fast food in a very specific way. END_OF_DOCUMENT_TOKEN_TO_BE_REPLACED