I Just Had My Ten-Year Anniversary of Starting My Weight Loss Journey… and I Forgot All About It!

How’s this for embarrassing? On Thursday, January 23, 2020, I celebrated ten years of healthy living. Ten years that began with losing 160 pounds, and then keeping a majority of it off ever since. It’s a huge, impressive milestone… that I completely forgot about. 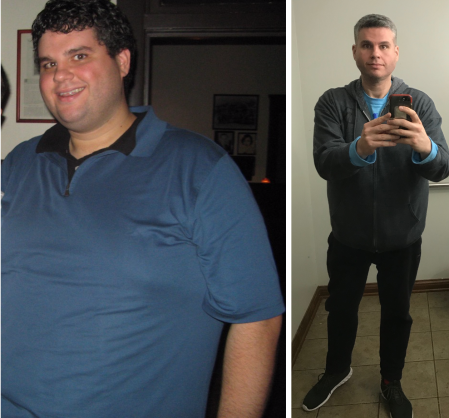 What an awful oversight! Halfway through that day, I got a text from my UCLA-stair-climbing friend Mat, wishing me a happy anniversary. He saw where I had mentioned it was coming up in a recent post, and made a freakin’ calendar reminder. I wish I had thought of that!

But I did something about it. At first, they were small somethings: bringing a healthy lunch to work, and keeping a change of clothes in the trunk of my car, so I could go to the gym after work, or at least go for a walk.

Then I gained some momentum, and kept at it. I found new changes I could make, new healthy foods to explore, new exercises and workouts. I created healthy habits. Richard Simmons became an invaluable friend and supporter that kept me accountable, and I continued to find my way forward after he abruptly disappeared.

I found a motto – Keep It Up, David – and no matter how wonderful or crummy any particular day was, I would use that motto to rally for another day. I have nearly ten years of blog posts on this very website chronicling the story – and I say ‘nearly’ because while I started my weight loss efforts on January 23rd, I didn’t start the blog until eight months later, so I have a little time before until I celebrate the 10-year anniversary of this website. Yes, I’ve already made a calendar reminder.

Ten years is a long time. I’m almost 41 years old, so this anniversary reflects that I’ve given a quarter of my life thus far to this endeavor. It was because of the weight loss that I took up racing, and since 2011 I’ve done 124 races, with 82 of them being stair races.

As you long-time readers know, it hasn’t all been peaches and sunsets and rainbows. Weight loss maintenance isn’t any easier than losing the weight, and I’ve had plenty of ups and downs. My weight is up right now, and subsequently, my spirits are down, but I know that this mindset is temporary, and in the meantime, I’m still trying the best that I can.

That may be the most impactful part of this anniversary. I tried many, many times, before this particular effort, to lose weight, and at one point or another, I inevitably just stopped trying. It became too hard, or I became too disillusioned, or other changes in my life got in the way. But not this time. I haven’t stopped trying. I’ve tried as best as I could for ten years straight, and the results that came from that effort are astounding.

I realized, a long long time ago, that it’s my determination that will keep this fire alive in me. There are times where I’m downright distraught by the notion that I will never be on easy street. I will never be able to not think about my food choices, or have the luxury of not exercising.

On the flip side, I’m overwhelmed by how healthy decisions make me feel a vast majority of the time. I use exercise to process my day, and get negative energy out. I love creating healthy meals that still feel indulgent but don’t me feel regretful later that day or the next morning. I spent all last year waking up on weekend mornings and either running a 5K or 10K race, or racing an ungodly amount of stairs, and I was able to do that because I was taking care of myself, and completing that insane #40years40races challenge is something I will never forget, and probably never replicate.

So, yeah, there are low periods. I’m struggling right now, because it’s way harder than I thought it would be staying active during a dark and dreary Michigan winter. But there are incredible highs as well. Races, yes, and numbers of the scale, yes, but also higher-than-ever confidence and self-worth, and the immeasurable feeling associated with knowing that I’m capable of amazing things, and accomplishing those amazing things again and again and again.

I’m here, ten years in, because I know I will never let the lows take over and crowd out the highs. I know that bad times will pass, and that the good times create much stronger memories and elevate me so much more than the bad times bring me down.

I’m committed to keep going. I’m going to keep sharing my story right here. I have ten years behind me, and the rest of my life way out in front. There’s so much to be excited for, and so much that I can’t even imagine right now. So many reasons to say…

This entry was posted on Sunday, January 26th, 2020 at 5:23 pm and is filed under Uncategorized. You can follow any responses to this entry through the RSS 2.0 feed. You can leave a response, or trackback from your own site.

14 Responses to I Just Had My Ten-Year Anniversary of Starting My Weight Loss Journey… and I Forgot All About It!