I went to a holiday party last night, and contributed a dish, since it was a potluck. I’m not going to take credit and say I invented anything, but I did take a recipe that only had four ingredients and swapped two of them for healthier items. That’s 50%, y’all! It all started with a package.

This is the Pineapple Pecan Cheesespread Mix by Country Home Creations, a local dip mix company that’s based in the next county. I wasn’t familiar with the company, but they had a booth at a pop-up holiday market I went to, and I found this dip intriguing. I love pecans and pineapple, and hadn’t really thought of combining the two. Let’s give this a whirl!

To make the dip, you combine the contents of the package, which is mostly pecans, dried onion and green pepper, and spices, with three other ingredients: a 20-ounce can of crushed pineapple, drained, and 8 ounces of both cream creese and sour cream. I had no intention of using either of those last two ingredients. Here’s where the healthy swaps come in!

These two swaps leave 809 calories out of the dip – not too shabby!

The dip needs to hang out in the fridge for about 4 hours, probably so the moisture from the other ingredients rehydrate the dried veggies and spices.

I took a suggestion from the dip package and filled the channels of celery stalks with the dip. To do that neatly, I made a piping bag out of a Ziplock, and snipped off a corner.

Worked like a charm! I added a small cube of ham to some of the celery at the end, for garnish – because not many things go well with pineapple, but ham is one of them! Not everyone likes ham, though, which is why I left some ham-free.

The dip is excellent. It’s a really interesting blend of savory and sweet, creamy and acidic. It’s smooth, but with textural components from the pecan bits and pineapple, plus the satisfying crunch of celery.

Here’s the platter I brought to the party, alongside a giant celery stalk I made for myself, you know, just to make sure everything tasted right before I left the house. 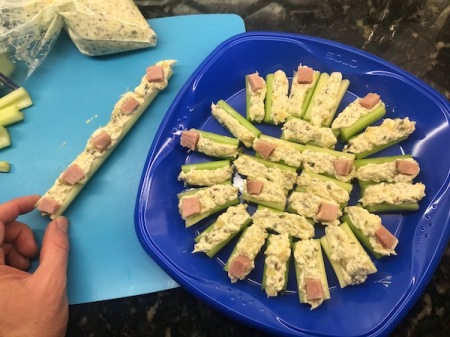 This recipe makes a LOT of dip, so I also brought a bowl of it that people could dip other things into. And I still had leftovers for me, which I ate today with celery and carrots.

Before I wrap this up, just want to thank everyone who reached out after my last post to check in on me and offer love, support, and friendship. I’m continuing to feel better, and I’m keeping busy, which is always a huge help.

This entry was posted on Sunday, December 15th, 2019 at 6:17 pm and is filed under Uncategorized. You can follow any responses to this entry through the RSS 2.0 feed. You can leave a response, or trackback from your own site.