Earlier this year, I competed in a 6-hour stair race in Salt Lake City. During the race, a friend named Brian Zamboni suffered a massive heart attack, collapsed, and ultimately passed away a few days later.

I first met Brian a few years back. We met when Brian approached me at a race to talk about this blog, which he had found helpful. We weren’t super close, but I enjoyed chatting with him at various races across the country. He was kind, supportive, and friendly, and I admired his focus and drive in the stairwell.

I think about Brian frequently, especially when I’m climbing stairs or racing. His death was tragic, without warning (no family history, no prior heart symptoms or troubles), and absolutely devastating. I remember the moment when I learned something was wrong – a crowd had formed in the doorway and hallway on the 7th floor of the building we were climbing, and, at the center of it, I could see a climber getting chest compressions. I didn’t know at the time that it was Brian, as the huddled crowd blocked my view, but that scene is seared into my brain, and I don’t think I’ll ever forget it.

Anyone’s passing is hard, but Brian’s really lingered and weighed on me. He’s only about five years older than me, and has been extremely health-conscious for his whole life, as I understand it. And he died doing something we both loved.

Brian’s death hasn’t scared me away from any stairwells. If anything, I’m more determined to keep racing than ever before. I want to keep pushing myself, because one day it might all be taken from me, and I don’t want to go down with regrets.

Saturday was Brian’s birthday. He would have been 46 years old. I celebrated him by doing what we both love: stairs! 10 climbs up a 191-step stairway in Bloomer Park. (Read more about it here.) It was hot and muggy, but still a beautiful morning on a lovely, wooded hillside. 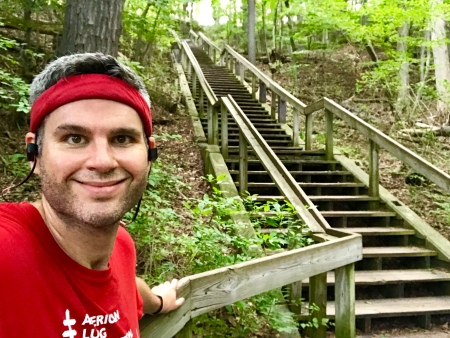 Some of the climbs were just regular ol’ climbs, and sometimes I did drills, like climbing up sideways, or with high knees, or modified skaters. I did box jumps all the way up during one climb, which took forever and was very challenging. I collected acorns to keep a tally of my climbs. 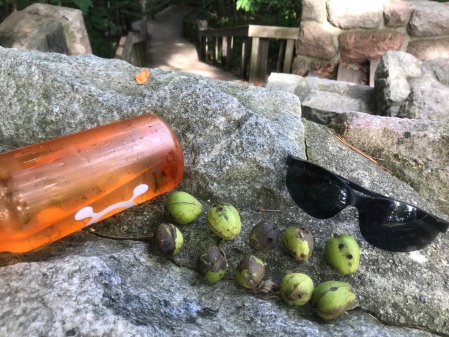 This workout’s for you, Brian. I miss you.

This entry was posted on Monday, July 22nd, 2019 at 7:26 pm and is filed under Uncategorized. You can follow any responses to this entry through the RSS 2.0 feed. You can leave a response, or trackback from your own site.

4 Responses to Happy Birthday, Brian, and Rest In Peace