The High-Altitude Workout That Made Me Sick (Move to Michigan Road Trip, Part 2)

Greetings from Omaha! JJ and I are at the end of a long day that started in Colorado, involved about 10 hours of driving, and included a 5K race!

I’ll get to all those details, but maybe I should tackle this post chronologically. I’m on a road trip from Los Angeles to Michigan, where I’m moving. I last wrote from Utah, where I shared my road trip healthy food strategies and lots of photos.

From Utah, JJ and I went to Winter Park, Colorado, to hang out with my sister Sarah and her family. 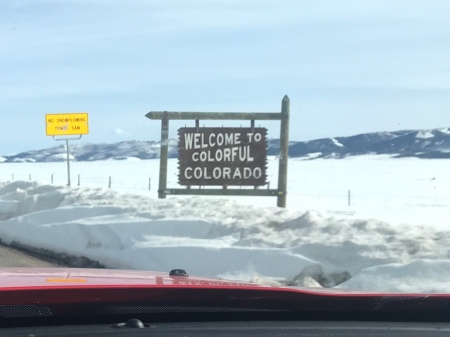 JJ is best friends with Sarah’s dog Coco, so they literally played all day long, wrestling and chasing, indoors and out.

They are so cute together that I can’t even stand it.

One was constantly nudging the other to play, so moments like this one, where they both were asleep, were pretty rare:

Sarah, her husband Justin, and my nephew and niece Sam and Allison actually went away for a little trip while I was there, so I got to house-sit with two doggies for almost two days. Score!

There’s a community rec center down the street, so I went three days in a row to get in a workout. I used an Adaptive Motion Trainer for the first time in a couple years…

…and a rower that’s mounted on a platform that allows the entire machine to slide back and forth, further replicating the feeling that you’re in a boat… 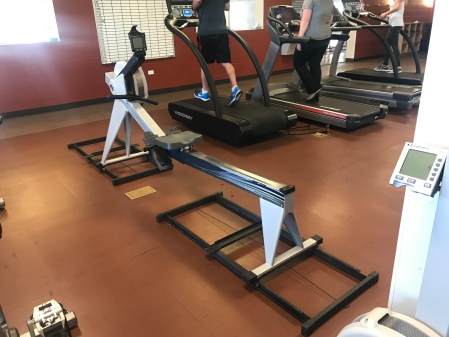 …and I also used a Arc Trainer and a spin bike and lifted weights.

<insert photos of those things here from your imagination>

Winter Park is in the mountains, about 8,500 feet above sea level. I didn’t notice much of a difference from the altitude during the first two workouts, because I was going at my own pace, but the third day was a whole different story.

On the third day, I took a step class. I took step classes frequently in Los Angeles, taught by my friend Anne, so I know they’re tough, but this one was so much tougher.

I felt fine during the first third of the hour-long class, And started really struggling during the second third, and by the final third I could barely keep moving. I had to lower the height of the step I was using two times, and by the end I was doing some of the moves on the floor, instead of the step.

The teacher and other students (I was one of three taking the class) were very supportive, and I still had a good time. But when I got back to Sarah’s place, I could tell that something was off. Everything ached, and I was horribly queasy. And I felt like this for hours. I drank little sips of water, but didn’t eat anything, because I felt certain that I would throw it up.

I didn’t feel comfortable eating until six hours after the class, so I made some scrambled eggs with bell pepper, green onions, turkey, and a little cheese. I was able to keep it down, and I started feeling much better.

Even though Sarah and my brother-in-law Justin have a beautiful kitchen, I kept my meals pretty simple while I was housesitting. I made salad and soup (from a can, and yes, I picked out a low-sodium variety) for lunch… 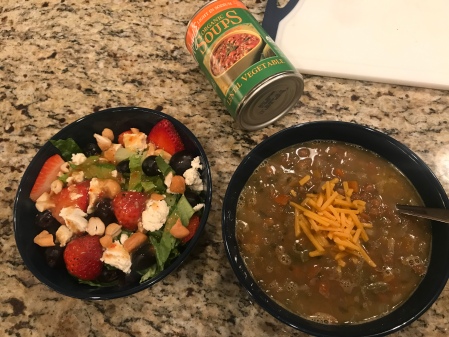 …and for one dinner heated up a frozen “Korean-inspired” meal and bulked it up by mixing it in with a salad. 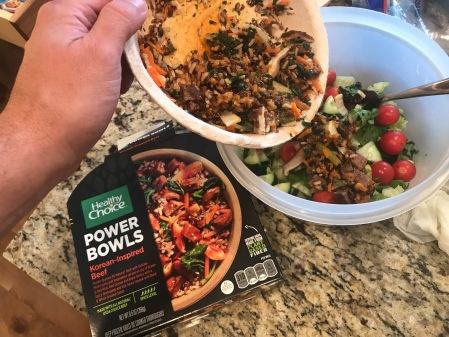 In addition to the gym workouts. I walked JJ and Coco a lot. And since the house is rather isolated, the doggies could be off-leash while we walked, which was great fun for them, and slightly nerve-racking for me.

Before they left, Justin showed me this awesome cross-country ski trail right by their house, and he and I and the two dogs went for a 3 1/2 mile walk across the snow. Walking on snow is harder than walking on concrete, because the ground is uneven and your feet sink a little with each step. Every once in a while, while getting over a snow drift, I’d sink down to my knee in the snow! It’s great exercise. And pretty, too!

JJ and I left Winter Park on Saturday morning, at 7am, so we could get to the Denver suburbs for the Fehringer Ranch Race. It was billed on their website as “5K-ish,” and, sure enough, it was 3 miles even, about 1/10th of a mile short of a 5K.

The course was along muddy trails in a big park, and JJ was allowed to run with me.

Any race with mountains in the distance is going to be a good race!

Denver isn’t as high as Winter Park, but it still has an elevation of about 5,500 feet. The mile-high city! And I definitely felt the altitude during the race. After a half-mile of running, I felt like I had already done a 10K. But I kept going, stayed positive, got into my groove, and finished.

JJ was the fastest doggie at the race!

He was also the only doggie that raced, but let’s agree not to tell him that.

This race, which replicates high school cross-country events, attracts a lot of serious runners and former track athletes. Because of that, even though I had a perfectly respectable time, JJ and I finished at the very back of the pack, second or third from last place.

But who cares? I had fun, and got one race closer to my goal of competing in 40 races this year.

JJ and I both rehydrated, and then I wiped down his muddy paws in the parking lot, and completely changed my clothes. Then we started driving to Omaha!

JJ was so wiped out that he slept most of the way. In fact, he was so still that every so often I would reach back and make sure I could feel his chest cavity rising and falling.

We stopped for a gas and bathroom break at a Sinclair station near the Colorado/Nebraska border, where they had a large statue of the Sinclair dinosaur from their logo. JJ and I were both very interested in it. I wanted a selfie…

…and JJ peed on its leg.

We arrived in Omaha around 7 PM, and checked into the dumpiest motel around. (It was cheap and allowed pets, and those were the top two items on my checklist.)

I fed JJ, and took him for a walk, and then went to the diner next store for dinner. My plan was to order an omelette, since those are a pretty reliable healthy diner staple, but instead I went with lemon artichoke chicken, off the entree part of the menu. 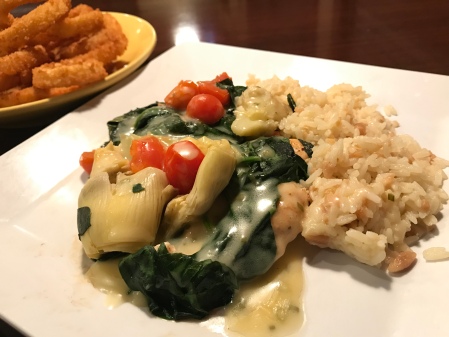 I honestly don’t know if it was good or not, but it hit the spot after 12 hours of driving and running. I even celebrated the day by getting onion rings on the side, instead of green beans or broccoli.

This entry was posted on Tuesday, April 2nd, 2019 at 4:40 pm and is filed under Uncategorized. You can follow any responses to this entry through the RSS 2.0 feed. You can leave a response, or trackback from your own site.

One Response to The High-Altitude Workout That Made Me Sick (Move to Michigan Road Trip, Part 2)