My Last Night in Los Angeles

It’s time! By the time you read this, it’s very likely that JJ and I will be on the road, on our first day of an epic road trip to our new home in Michigan. More on that in a bit. First, I want to talk about my final night in Los Angeles. I spent it doing something I love: climbing stairs.

Even though I won’t be in town to compete, I registered for the American Lung Association’s Fight For Air Climb in Los Angeles so I could have access to the stairwell training sessions. One was scheduled for my last night in town, and I started this week thinking there was no way I’d be able to attend, given all the stuff that I’d have to do to prepare to move. But I flew through my to-do list, and was elated when I realized my Thursday night would be free.

So I headed downtown to the Aon Center, the 63-story skyscraper that introduced me to the sport of tower running. It was here that I competed in my very first stair race, back in 2012. I’ve competed every year since – seven consecutive years. I’m bummed to miss this year’s race, and grateful for this particular building’s imprint on my life and health.

The race ends on the roof, but during the training sessions, we climb from the 4th to the 55th floor, which is empty and awaiting a new tenant, and affords views in all directions, from floor-to-ceiling windows.

I climbed four times (204 stories). I took a few minutes, at the top, to soak in the views one last time. Stretched out in all directions was the city I’ve called home for 17 years. I’d say the moment took my breath away, but my breath was pretty spent from all the climbing!

My friend Mat suggested UCLA because some of the athletic facilities on campus are unlocked and open all day long and have lots of bleachers to run up.

Mat knows the campus well, because his wife Maggie is a professor there, and they used to live basically across the street. (I’ve been friends with Mat and Maggie since college.)

We parked on Veteran Ave, just north of Montana Ave, where you can park for free on the east side of the street until 3pm. Then we walked roughly a half-mile to the Straus Stadium at the Los Angeles Tennis Center. This place is awesome!

Mat and I began our workout by running up and down the aisles, all the way around the entire U-shaped stadium. Then we picked the longest aisle (49 steps), and climbed it 6 more times, doing various drills.

Did I mention that the stadium was an Olympic venue? Tennis, during the 1984 Summer Games, was played right there. Stefan Edberg and Steffi Graf won the Men’s and Women’s Singles, respectively, and who knows, maybe ran up and down an aisle or two! (Tennis was a demonstration sport at these games, and not an official sport, so gold medals were not passed out.)

Right next door is the UCLA Drake Track Stadium, so we headed there next. All the aisles have 89 steps, and we ran up 10 times.

Our last three climbs were sprints.

Between the two stadiums, we had been at it for about an hour, so we wrapped it up and walked across campus to Maggie’s office and then went to lunch. On the way we climbed a big set of stairs next to Royce Hall, but I didn’t count the steps, and we only did them once. 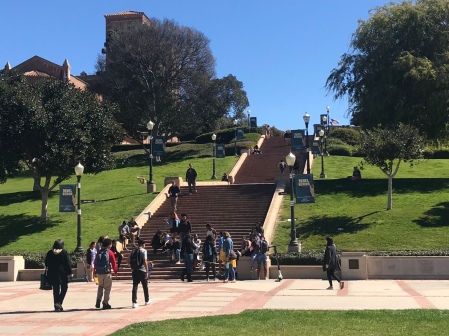 We took a very scenic route to Maggie’s office (Mat may or may not have gotten us a teensy bit lost) and then we all enjoyed a healthy poke bowl lunch. Maggie’s office was about as far from the car as possible, And Mat and I walked a total of 5 miles that day, including all the distance covered during the stair climbing. I can’t believe I waited so long to explore stair opportunities at UCLA!

I’m so glad my final two stair workouts in LA were so notable. As I climbed the Aon Center earlier tonight, I thought about all the fun and unique places where I’ve climbed stairs in this town, and was flooded with memories. It’s one of the things that I miss about Los Angeles. It’s a hilly city, with stairs everywhere!

The sun was about to set when I finished my fourth and final climb at the Aon Center. My final moments, near the tippy-top of the Los Angeles skyline, were peaceful and gorgeous.

I thought that perhaps seeing the orange and yellow glow wash over the city might make me think twice about my decision to leave, but that didn’t happen. I’ve been seeing friends and family for a couple weeks now, but I’ve been making a concerted point of thinking about it not as “goodbye,” but as “so long for now.” Because I’ll be back to visit. Not sure when, but it’ll happen.

In the meantime, I’m ready for this move. I know I’m making the right decision, and while there are question marks in my future, I’m excited to explore and start finding answers.

After leaving the Aon Center, I went for sushi one final time, because sushi in LA is amazing, and will it be amazing in Michigan? I’m not sure!

I went to Chiba, my favorite sushi place, and sat at the counter and ordered a couple rolls and some individual pieces of sushi. 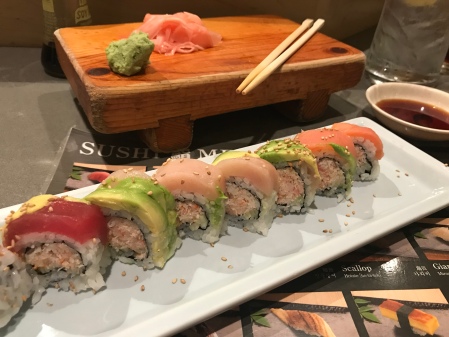 I also ordered their exotic vegetable tempura, featuring some veggies I’ve never heard of and can’t even remember. I normally don’t order fried food at restaurants, but if you know me, you know I love exotic vegetables!

My road trip to Michigan starts tomorrow. (Or maybe it’s already begun depending on when you’re reading this.) I’m spreading it out over two weeks, and stopping to visit family all along the way. I may blog about the whole thing, or I may just keep it between me and JJ. I’m not sure yet.

Either way, I already have a bunch of healthy snacks, and no matter what junk food calls my name from the gas station shelves and drive-thrus, I’m going to stay healthy and make good choices. And I will exercise too! I’m gonna need to move my body a lot to compensate for all the hours behind the steering wheel. More news to come!

This entry was posted on Friday, March 22nd, 2019 at 1:22 am and is filed under Uncategorized. You can follow any responses to this entry through the RSS 2.0 feed. You can leave a response, or trackback from your own site.

2 Responses to My Last Night in Los Angeles