My Last Recipe Of The Year Is For… Lemon Jello Salad (Yes, Really!)

Jello Salad! It’s a blast from the past! 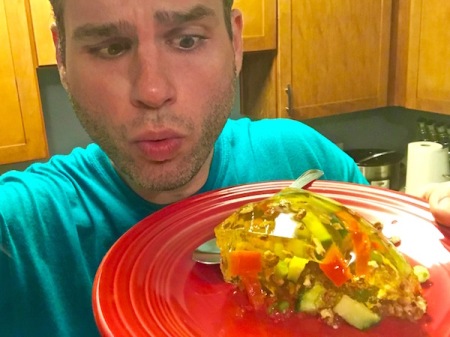 This isn’t some random Jello dessert. It’s a legitimate salad, made with four kinds of vegetables. And, of course, Jello!

You’re probably asking yourself WHY? Why bother with a dish that was all the rage 70 years ago? And my answer to that is… because of a podcast.

I listened to an episode of a podcast called “Household Name” while walking JJ recently that was all about the history of Jello. (If you don’t listen to podcasts you can read this article, also fascinating, on the same subject.)

What struck me about the podcast was the part about how novel and bizarre Jello was when it was first introduced, and how housewives and families saw it as a fun science experiment that tasted good, could perfectly preserve leftovers, and be used as a vehicle to use up the bits and pieces in the pantry and vegetable crisper. You could put anything in Jello! And people did.

I grew up in the ’80s, after Jello had peaked as an ubiquitous part of everyone’s kitchen, but I have a few vague memories of molded jello salads being served somewhere or other, possibly by my grandma Dorothy. I also can’t literally remember that last time I had any kind of Jello in any capacity, so I decided to honor one of our nation’s biggest food fads ever and make a Jello salad.

Here’s how I made my Lemon Jello Salad.

I started with two boxes of Lemon Sugar-Free Jello – only 40 calories a box! 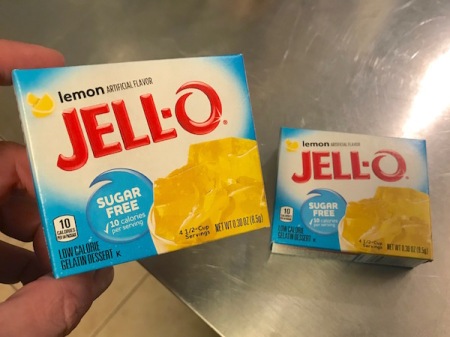 I followed the box directions, and dissolved the powder in two cups of boiling water, then added two cups of cold water, and popped it in the fridge. I suppose you could use any flavor of Jello, but for a vegetable salad I’d only want to use lemon or lime, so those are ingredients commonly found in salad dressings and marinades and such. 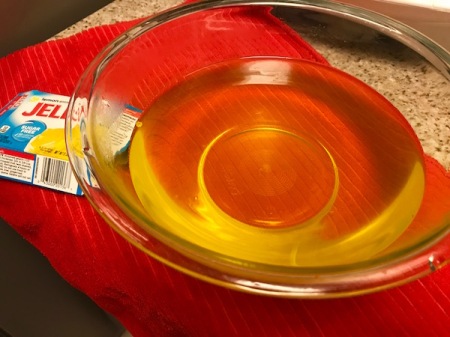 The key to a successful Jello salad, with the other ingredients suspended in the middle, is to add them after the Jello has set up a little bit, but not all the way. I read a bunch of recipes online, and decided I would add my other ingredients after 90 minutes of fridge time.

So I prepped my salad mix-ins, by chopping everything into equal-sized parts. It’s roughly 1/2 cup of each, but I eyeballed it. 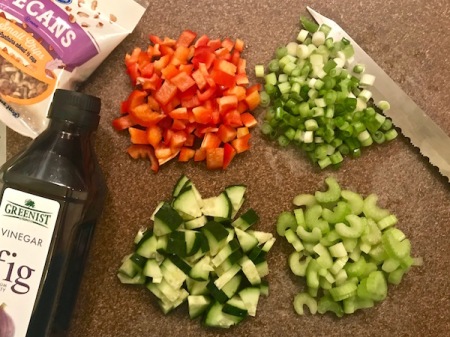 You really can use whatever vegetables you have lying around, like shredded carrots, ribbons of leafy greens, radishes, or other colors of bell peppers.

A bunch of recipes online all featured a little vinegar, which I figured must be used to eliminate some of the sweetness from the Jello, so I got out my bottle of fig vinegar so I could add 2 tablespoons fig vinegar. The final ingredient was 1/2 cup chopped pecans, although walnuts or slivered almonds would be just fine as well.

I pulled out the jello after 90 minutes, added all the mix-ins, stirred it up, and popped it back into the fridge. It’ll need another three or four hours to finish setting, but mine stayed in overnight. 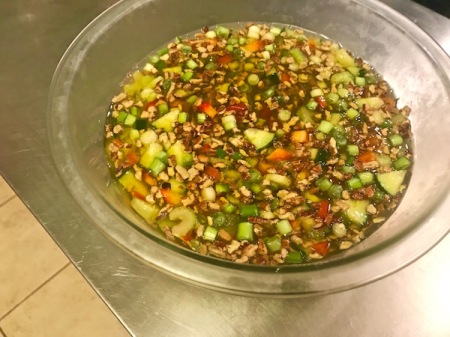 No, wait, it looks better after I unmolded it onto a plate! 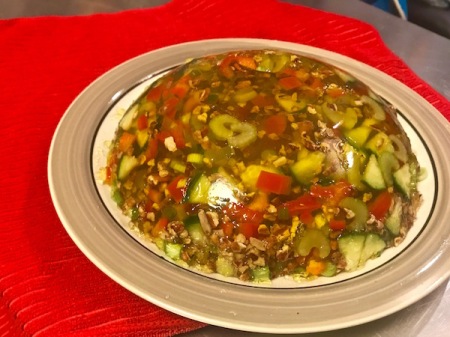 I have to admit, it was bizarre to see little pieces of cucumber and celery suspended in a substance that I mostly recognize as a dessert. 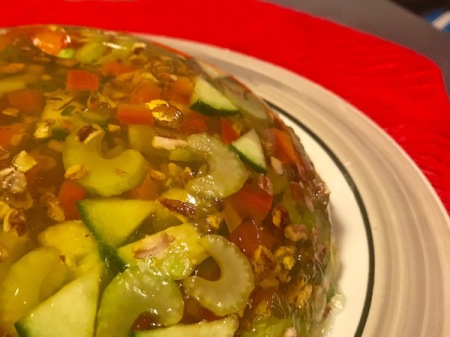 I was able to slice it like a cake, and you know what? It wasn’t half bad! It was still much sweeter than I’m used to salads being, but the vegetables were crisp, the pecans were crunchy, and it was easier to eat than a standard green salad in a bowl. 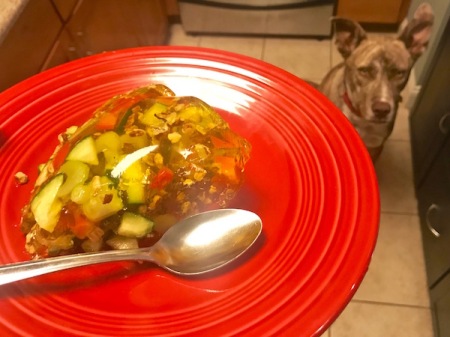 And, from a calorie perspective, the Jello part only adds 80 calories to the entire recipe, and no fat or carbs, so it’s a perfectly reasonable way to eat if you’re minding your calories. The Jello doesn’t add anything particularly nutritious, either – no vitamins or minerals and only one gram of protein per serving.

To be honest, I’m toying with the idea of trying a more ambitious Jello salad – one with seafood or mayo or something truly bizarre that was eaten on the regular a few generations ago. It won’t happen until after the holidays (if it happens at all), and you will for sure hear about it on this blog.

Speaking of the holidays, they are fast approaching. I’ll be traveling and spending time with family and friends, and I’m not sure when I’ll be posting next, so I wanted to take a minute and wish everyone nothing but health and happiness. Thank you for reading all year long – and I look forward to sharing more in 2019! I’m going to exercise and make smart choices all the way until December 31st, and I hope you do too!

This entry was posted on Wednesday, December 19th, 2018 at 8:48 pm and is filed under Uncategorized. You can follow any responses to this entry through the RSS 2.0 feed. You can leave a response, or trackback from your own site.

2 Responses to My Last Recipe Of The Year Is For… Lemon Jello Salad (Yes, Really!)