What?! A Race?! Less than two weeks after LASIK surgery? 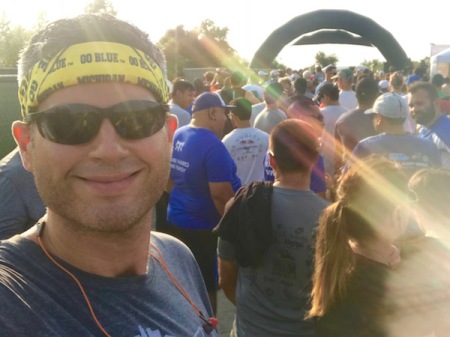 Yup, it’s true. But I didn’t defy any doctors’ orders. I was told I couldn’t do anything more rigorous, exercise-wise, than walking, and since this was a 5K run/walk, I just walked it. I walk about 4 or 5k every day anyway, so why not do this race, even if I don’t race it?

Conquer the Overlook was at the Baldwin Hills Scenic Overlook, a big park with a pretty steep hill. The race starts at the top, and the route winds down the hill, then back up, then down a second time, and ends with a 282-step stairway back to the top. This is the fourth year I’ve done this race, so check out my previous recaps (2015, 2016, and 2017) to read what it’s like to run it!

This year, though, I was just walking it. I thought I might be tempted, being surrounded by runners, to run as well, but I squashed those notions quickly. Gotta do what the doctor says and just walk. Don’t want to mess up my eyeballs!

Because I was walking, I was towards the back of the pack, and I liked looking down the hillside and seeing all the runners on the switchbacks ahead of me.

I wore my sunglasses the entire time – and it was an evening race (6pm start), so I needed them. The sunglasses served a nice secondary purpose: shielding my eyes from the dust that was getting kicked up by the runners passing me.

One of my favorite parts of this race, every year, is the steep road up the hill, because even though it’s really difficult, all my experience climbing stairs means I can power up it, and pass people, instead of being passed. The same held true this weekend when I was walking. 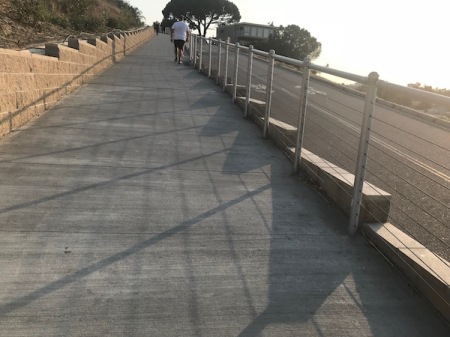 I passed that guy.

I took a selfie at the 2-mile mark, which was most of the way up the hill… still going strong!

As I came down the switchbacks the second time, the faster runners were already climbing the stairs and finishing, and that was inspiring to see as I passed.

Finally, after over 45 minutes of walking, it was time to switch gears and climb some stairs!

These stairs are made of stacked slabs of concrete pieces, and each one is a different height and depth than the one before it. There’s no way to establish a rhythm, and no handrails to help out. But I climbed, passing people as I went.

During previous years, when I ran the race, I would be exhausted by the time I got to the stairs. I was exhausted this year, too. Those stairs are hard! (And I’m not in the best shape at the moment either.)

The finish line was at the top, and I sat down for a spell after collecting my finishers’ medal. They always do a nice medal at this event.

I knew, of course, that my time wouldn’t compare to my previous times. I didn’t have a goal but assumed I’d finish in about an hour.

Within a couple minutes of finishing, my official time was texted to me:

Not too shabby! Plus, parking is at the bottom of the hill, so I had to walk almost a mile before the race started, and afterwards, to get back to my car. All in all, I covered over 5 miles that day, especially when you include wandering a huge hilltop to find the registration table to pick up my bib, which was hidden in a far corner, with no signage pointing the way. (And two volunteers pointed me the wrong way, too.)

I also got to see a few friends, which is always great. Me, Madeleine, Mike, and Alberto: 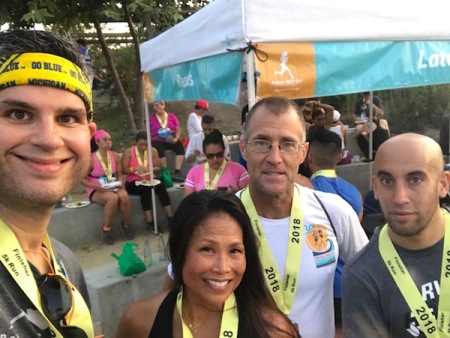 My next race will be towards the end of September. It’s a stair climb, and I’ll only have three weeks or so of actual training, once my LASIK recovery period is over. So, I don’t think I’ll be fully ready to set a PR, but having races on the calendar will push me to get back into shape.

This entry was posted on Sunday, August 12th, 2018 at 11:26 pm and is filed under Uncategorized. You can follow any responses to this entry through the RSS 2.0 feed. You can leave a response, or trackback from your own site.