WHOA! These are some loooooooong beans!

I’m posting all this week about new products and foods. This is one of those posts. I’m doing a lot of experimenting, since I’m buckling down and getting fully back on track, and I want to share what I’ve been trying with you!

Here’s all the produce I purchased at the farmers market: 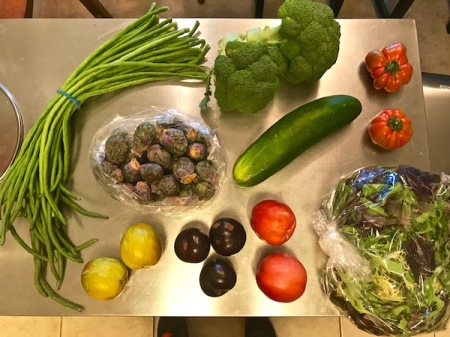 In addition to the long beans, there’s a bag of purple Brussels sprouts (which I’ve blogged about once before), broccoli, a cucumber, two heirloom tomatoes, and a bag of mixed salad greens.

There’s also some stone fruit at the bottom: the two yellow/greenish ones are called Flavor Grenade Pluots (well-named!); the three deep purple ones are Japanese Heirloom plums (delicious but couldn’t tell any difference from regular plums); and two nectarines (which were a little disappointing).

I also bought a jar of pickled green tomatoes. I’ve eaten a couple of these, and the brine is spicy, the tomatoes crisp, and altogether it’s a fantastic experience.

But let’s get back to those long beans!

These are essentially super-long green beans. You can cook and eat them the same ways you eat regular green beans. They seem to be more common in Asian countries. When I was researching them, I kept seeing references to Indian, Filipino, Chinese and Malaysian cuisine. I also saw a few references to dishes from the Caribbean and the north coast of South America.

I thought it was pointless to buy long beans and them chop them up to make them easier to cook, so I left them whole, snipped off the ends, and sauteed them with a little garlic and coconut oil, and added some bottled ginger marinade I had in the fridge.

Then, in a separate skillet, I sauteed some shrimp with garlic, onion, and a splash of soy sauce.

Finally, I put it all together and ate it.

And, in case you’re wondering, I used a knife and cut the beans up to make them easier to eat, but not before trying to slurp one up, spaghetti-style.

(It didn’t really work that well.)

There’s a meat vendor at my farmers market, with so many kinds and cuts of meat that I got exhausted reading their sign. But two new-to-me things caught my eye, and one of them was…

I’ll try almost anything once, and have the blog posts to prove it. Check out my posts on eating balut, kangaroo, alligator, and moose.

The vendor at the farmers market said it was similar to bison, but a little gamier, and leaner too. Typically only 5-7% fat. Sure, let’s give it a go!

I made yak burgers with my ground yak. I mixed an egg into it, which was suggested by the vendor, as a binder, because the yak burger otherwise might fall apart due to the lack of fat. I added salt and pepper, and made two patties.

Then I added a healthy dose of salt-free steak seasoning to the remainder of the yak and made two more patties. I sprinkled extra seasoning on top so I could tell them apart. I made some without the seasoning mix so I could taste the yak meat on its own, without lots of additions. 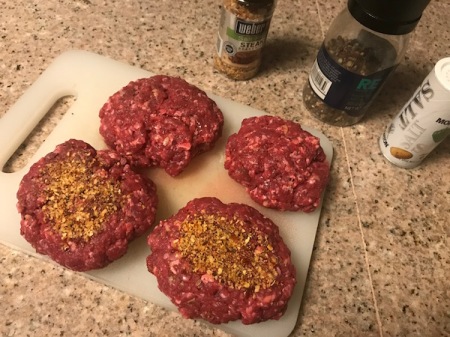 I cooked all four patties, and ate two of them for my dinner, and saved the other two as leftovers. I also roasted the purple Brussels sprouts, and used a Sur La Table Maple & Sage seasoning mix to jazz them up. 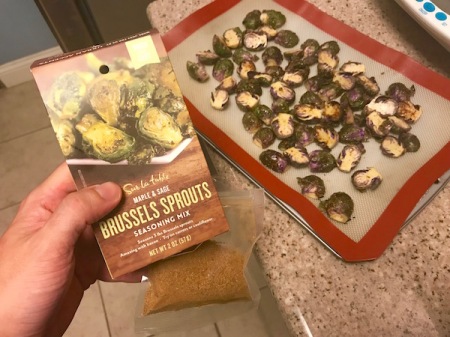 This is the third and final variety of Sur La Table seasoning mixes in my house – and I wrote about the other two the other day. Read about them here!

I don’t have any bread in the house, so I just ate the patties with a knife and fork with other typical hamburger toppings: heirloom tomato slices, onion, avocado, ketchup, mustard, and mayonnaise. 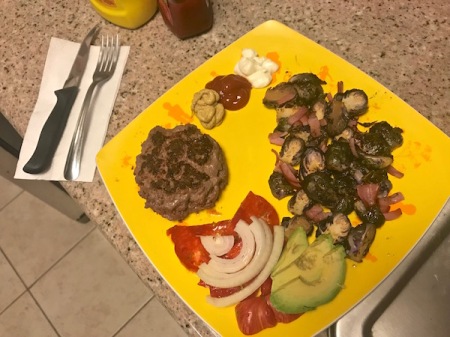 The yak was delicious. It reminded me of venison or bison, and I definitely preferred the seasoned patty. Yak on its own was a tad dull.

I have one other protein item that I picked up at the farmers market that I’m going to save for another post – and that’s because I haven’t eaten it yet! But I’ll give you little tease… it’s organ meat.

I’m loving getting reacquainted with the farmers market. So many healthy options, and nice people, and beautiful fruits and vegetables. I definitely encourage you to check out yours!

Stay tuned: More new finds in my next post! And check out my last post, featuring a seaweed snack and an awesome new cardio machine.

This entry was posted on Thursday, August 9th, 2018 at 12:00 am and is filed under Uncategorized. You can follow any responses to this entry through the RSS 2.0 feed. You can leave a response, or trackback from your own site.