I’m back in Los Angeles after two weeks in Michigan. The first week was spent in St. Joseph, but I haven’t shared much about my second week, except for the awesome motivational speaking gig that happened one night. So there’s a lot to catch up on! 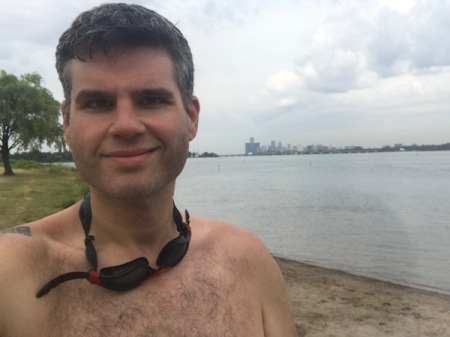 Before I get to the onslaught of food photos, I wanted to start with an update about  my achilles tendon, which I injured during a stair workout. It’s getting better, slowly, and I’m still not putting too much pressure or strain on it.

The photo above was from an early-morning open water swim workout in the Detroit River, off the beach on Belle Isle. The swim was great. I covered about a mile, back and forth along a line of buoys, and since swimming in no-impact, my ankle felt great. The workout was led by my high school buddy, Geoffrey, as part of the Be Bold Crew triathlon training program – read more here.

Apart from the swim, I’ve been doing seated weightlifting workouts, and have gone on a few casual walks – one of which was in a fantastic setting, and will be shared in my next post. Hopefully I’ll be back at full capacity soon!

OK, are you ready for food?

My eating in Michigan was pretty strong. I was staying with my parents, in my childhood home, so I had no trouble doing what I needed to eat healthy. That meant I went grocery shopping, and, on a few occasions, made dinner for all three of us.

Salmon, pan-fried, over quinoa salad, which in turn was over an asian slaw. This meal was more assembled than cooked, since every component came pre-packaged from Costco.

Marinated chicken, grilled on the back deck, cubed and served on a huge salad with olives, parmesan cheese, and loads of veggies.

And since I grilled that chicken outside, I also threw a hot dog on the grill, and ate it in a tortilla wrap with ketchup, mustard, and a pickle. 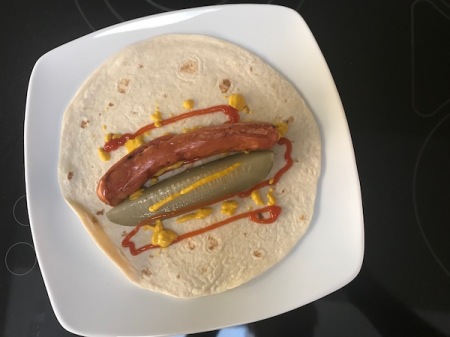 One day, for a snack, I made something I haven’t eaten since I was in elementary school: Ants on a Log (sometimes known as Bumps on a Log)!

Celery stalk + peanut butter + raisins = healthy snack. (I used dried cranberries because that’s all we had.)

I made smaller salads for lunch, often had eggs for breakfast, and munched on raw veggies for snacks.

I went over to my friend Molly’s house one day for lunch, and she made an ingenious meal that I had to share: mini bell pepper nachos!

Mini bell peppers, cut in half with seeds removed, topped with taco-seasoned ground beef (that she browned the night before) and a little bit of cheese, and baked for ten minutes. Then topped with scallion, jalapeno, radish, and a drizzle of sour cream. It was so satisfying – and guilt-free – that I had seconds and then fell into a food coma on the back patio, sleeping as Molly’s kids played.

I also went out to restaurants a few times, too. I went with my friend Debbie and her family to a food truck rally in Royal Oak, where we tried a few things from a few different places, including mac & cheese egg rolls, a pulled pork sandwich, and a fantastic salad from Mr. Kabob, a Mediterranean grill that’s located inside a gas station.

One night I drove up to the Flint area to visit a friend, Lynn, that I’ve known my entire life. She took me to a fancy-pants restaurant called Signature Chop House in Flushing, where they have a life-sized statue of a tiger presiding over the dining room. Yes, OF COURSE we took a selfie with the tiger! 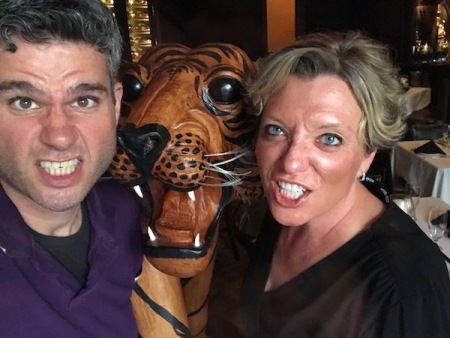 We shared an appetizer and each enjoyed a crab cake…

…then came a delightful chopped salad, also on a triangle plate…

…and for my entree, I ordered lamb chops with a side of asparagus. The lamb had an orange glaze that was spectacular. 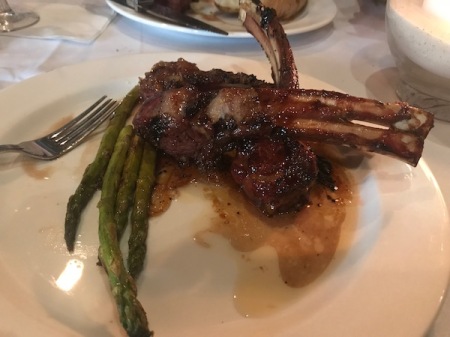 When the dessert tray came around, Lynn asked if I wanted to share a dessert. I said I’d be good for one bite, and so we ordered the creme brulee, and I ate my one bite, and it was creamy and delicious.

On one of my final nights in Michigan, my parents told me to pick a restaurant for dinner, so we went to Bill’s, in our town of Bloomfield Hills. My mom and I both gravitated to the stuffed squash blossoms on the menu, which we split as an appetizer. Squash blossoms are literally the flowers of the zucchini plant, and they’re edible, and they’re a delicacy because they’re only in season for a couple weeks each year. These were stuffed with goat cheese, and were delicious.

Then I had a cup of chilled tomato-basil soup…

…and their halibut special, which was served with farro risotto, carrots and fava beans, and a pistachio pesto that was my favorite part.

This meal ended with one bite of a maple carrot cake, which I think I liked more than either of my parents, because I’m a big fan of maple.

None of the big restaurant meals were impromptu. I knew they’d be happening, so I made sure to eat smartly earlier on those days, so I could order what I wanted at the restaurants. Even with that freedom, I found myself leaning towards the healthier menu items. That’s a good thing – when you eat healthy, you crave healthy!

This entry was posted on Thursday, July 19th, 2018 at 3:31 pm and is filed under Uncategorized. You can follow any responses to this entry through the RSS 2.0 feed. You can leave a response, or trackback from your own site.

5 Responses to A Whole Slew of Michigan Food Photos