48 Rainy Hours in Colorado. Hail, Too!

If you wanted to see some hail in May, you should’ve been in Colorado last weekend. Last Saturday evening, during a brief but violent storm, it hailed pebbles of ice.

I’ve lived in Los Angeles for nearly 16 years, where rain is a rare miracle. I haven’t seen hail in a loooong time, so I loved it! We didn’t let a little weather stop us from having a good weekend, either. What to hear about it?

I landed in Denver late Friday evening, and the Lemon Climb race was first thing Saturday morning, and I’ve already told you all about that. After the race, Sarah and I came back to her house, and we relaxed by playing an epic game of Monopoly with Justin and my niece, Allison. I was doing pretty well, raking in boatloads of money from owning all four railroads and both utilities, but the tables turned after I bid poorly during an auction for Justin’s properties, after he went bankrupt. Sarah ended up winning, rightfully so. Good game, Sarah!

We had planned on going on a little hike that day, but rain kept us in the house. We did get outside a little later, for a 2.7-mile walk around the neighborhood. For dinner that night, Justin and I cooked two different Green Chef dinners simultaneously. (Green Chef is a meal kit service, read more about them here.)

One was barbeque chicken with squash, bulgur, and pickled cucumbers, and the other was honey-mustard salmon with mashed sweet potatoes and a kale salad with oranges and pistachios. Both were pretty good! Both recipes made two servings, so we split four servings between three adults and two kids, with some leftovers in the mix, too. My plate: 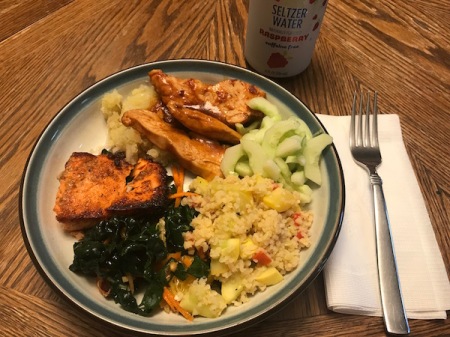 My nephew Sam had a basketball game that night, so we went and watched him play, which was a blast. I don’t know much about basketball, so I learned a few things. But I’ve already forgotten them.

Sunday was Mother’s Day, and we started the day with a nice, long, 3-mile walk. Many cities in Colorado set aside open space, that can never be developed, and they’re open to the public. This open space was alongside a reservoir. We brought Coco, my doggie niece. 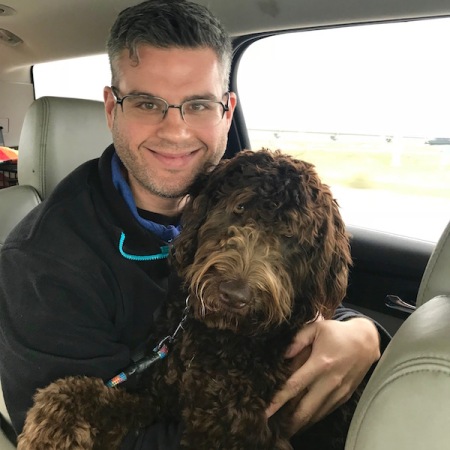 We met up with some of Sarah and Justin’s friends, who also brought their dog, so Coco and her friend ran around the entire time. Here’s Allison and me with the lake behind us, and some dreary-lookin’ rain clouds. 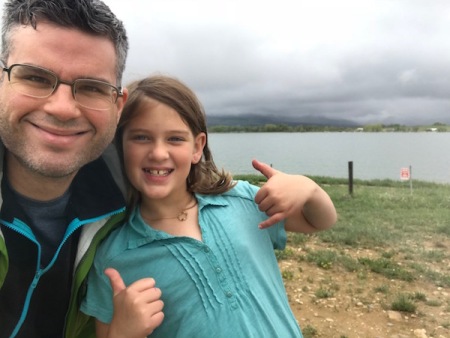 Justin prepared a fantastic Mother’s Day brunch when we got back: a build-your-own eggs benedict bar. I put together a delicious bowl: spinach on the bottom, tomato, lobster (!), canadian bacon, regular bacon, poached eggs, avocado, and hollandaise sauce. 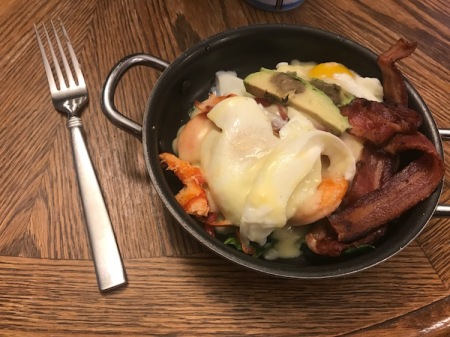 I drew a maze for Sarah for Mother’s Day, and after she opened it, we jumped in the car and headed to another one of Sam’s basketball games, which was a squeaker: it went into overtime! Sam’s team wasn’t victorious, but it sure was a nail-biter.

We only had about an hour of downtime after the game before Sarah and Justin took me to the airport.

I have a new hobby on airplanes, and I call them Tray Table Mazes. They’re mazes I draw during the flight, that I tuck into the in-flight magazine, with the hopes that the next passenger will find it and enjoy it. I’ve been sharing my Tray Table Mazes on Instagram (follow me if you aren’t already), but here’s the two most recent ones. The one from my flight to Colorado:

And the one from my return flight:

You can see more of my mazes – and purchase PDFs that you can print, on the spot! – by visiting my Etsy page.

This entry was posted on Friday, May 18th, 2018 at 9:51 am and is filed under Uncategorized. You can follow any responses to this entry through the RSS 2.0 feed. You can leave a response, or trackback from your own site.

2 Responses to 48 Rainy Hours in Colorado. Hail, Too!