One more post about my five nights in Paris. Can ya handle it? (I hope you say yes!) 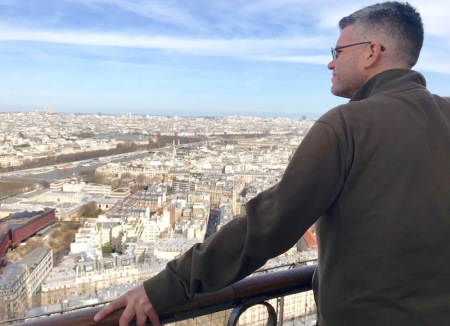 I wrote, in my last post, about all the things I did and saw, but I left out a major component: the food.

Here’s the thing about Paris: tell someone who’s been that you’re going there, and their knees will practically buckle when they talk about the food. Ohmygod the BREAD. Ohmygod the CREPES. Ohmygod the CHEESE. They’ll just go on and on!

I was looking forward to some good dining experiences, but I also had to be smart about it. I was there for a race, after all, and I wasn’t going to perform well if my belly was full of heavy, rich, indulgent, unhealthy foods. So I ate very healthily for the first two days, and cut myself some slack (but not much) afterward.

One of the things that’s been a nice side effect of my weight loss and maintenance efforts is that my relationship with food and food experiences has changed. I enjoy the occasional treat or indulgence, yes, but I no longer seek them out like I used to. I don’t HAVE to have a crepe. Or an eclair. Or a whatever. It’s freeing, actually. As a result, I left Paris without eating many of their well-known foods, like crepes and croissants, and while I’m sure I would have enjoyed them, I don’t regret it.

The only sweets I purchased were three macarons, the day after the race, and I’m glad I did. We found an impossibly adorable shop after walking all over town (five miles!), and enjoyed them while sitting in les Jardins du Luxembourg. They were delicious. The bottom one, pistashio with a cherry filling, was my favorite, although the other two, banana/chocolate and raspberry/coquelicot, were amazing too. 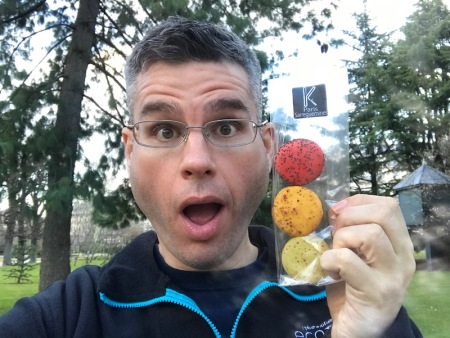 I stayed with my friends Jen and Katherine in an Airbnb that had a full (but small) kitchen, so we hit up the grocery store down the block, and ate breakfasts in our apartment: yogurt, fruit, and Katherine made oatmeal loaded with pecans, raisins, and apples. Jen and I also made dinner once and lunch once: sauteed veggies over couscous, with other things on the side.

My Twitter feed is loaded with photos of every single meal I ate in Paris, so you can check out all the pics here. The only photos I didn’t post were the ones from our best meal of the week, and I’m going to share them now.

No need in burying the headline: We ate at the same restaurant, in the very same room, as Barack and Michelle Obama did on a visit in 2009. Maybe we even sat at the same table! (There are only five tables in that room, so… 20% chance!) The restaurant is called La Fontaine de Mars, and the Obama visit is well-known. It was published in papers at the time, and now it’s in guidebooks, and the restaurant has a plaque on the wall commemorating their visit. 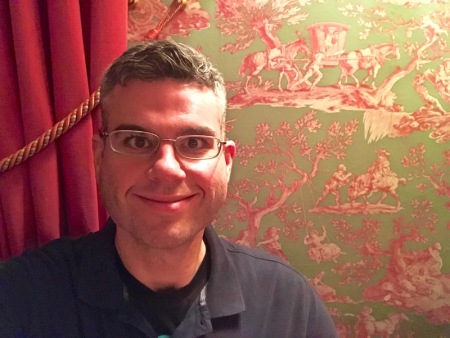 I wonder if Barack and Michelle have a photo in front of this wallpaper?

Jen, Katherine and I started by splitting an order of escargot. Yep, snails. And if you’re grossed out by the thought, take comfort by knowing they’re traditionally cooked in tons of butter, garlic, and herbs –  ingredients that can make anything taste incredible. 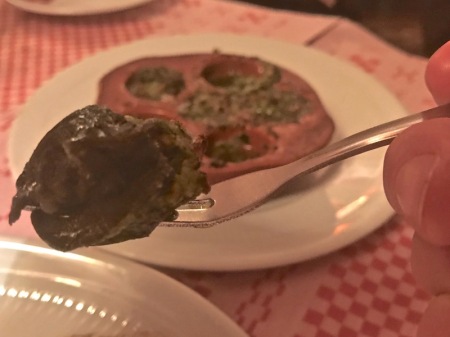 Katherine and I also shared an order of seared foie gras, served over poached pears. This was the third time I’ve eaten foie gras in my life (coincidentally, the second time was with Katherine, as well), and this was my favorite preparation, because the livers were seared whole, as opposed to being processed into a terrine or pate. And it went great with the pears and a balsamic drizzle. 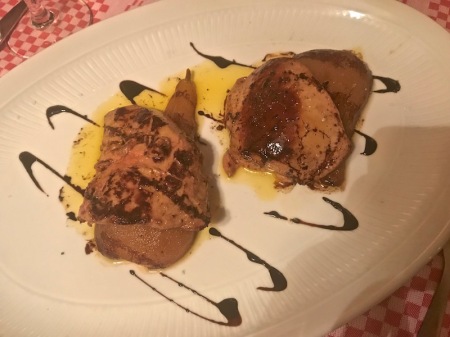 For my main course, I ordered the cassoulet – a hearty bean stew with a couple different kinds of sausage in it, as well as duck confit. OUTRAGEOUS! 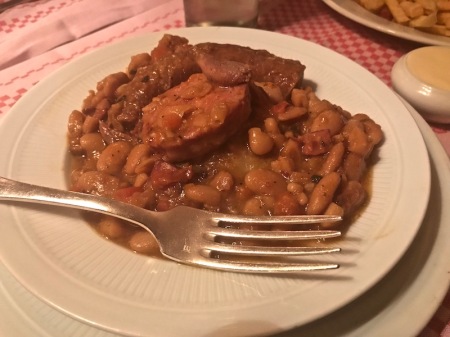 Jen and Katherine each ordered a dessert, and I took a bite of each. (One was a chocolate mousse, the other a rum-soaked sponge cake.) I also ate two pieces of bread, mostly because I wanted to enjoy some of the fabulous leftover garlic and herb butter from the snails.

This meal set us back about 100 bucks apiece. WORTH IT.

I also have a few more photos of the Eiffel Tower to share. These were taken the day before the big race, when Jen and I met Laura and Chuck there. 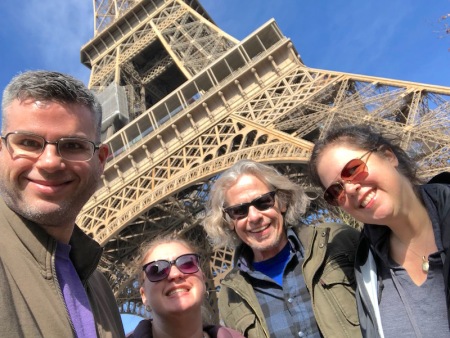 My goal for the visit was to do some reconnaissance in the stairwell, since the stairs are open to the public, up to the second floor, every single day. Jen and Chuck joined me for the climb, but because of her knee, Laura wasn’t able to.

In addition to checking out the stairs, I was glad to have the opportunity to check out the tower around me, because during the race I’d be pretty focused on the task at hand.

The tower’s nickname, The Iron Lady, is really fitting. It’s an engineering marvel – a beautiful, sculptural, intricate system of beams, junctions, and supports. 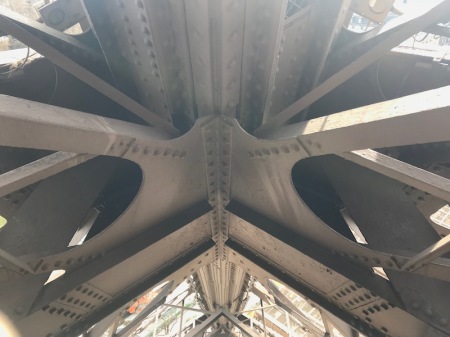 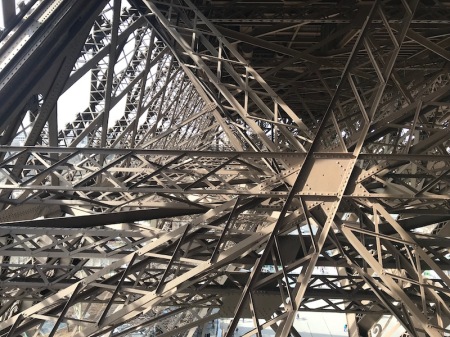 Laura nabbed a photo of us in the stairwell as we headed up to the first floor. Can you see us? (You can click on it to see it bigger.) 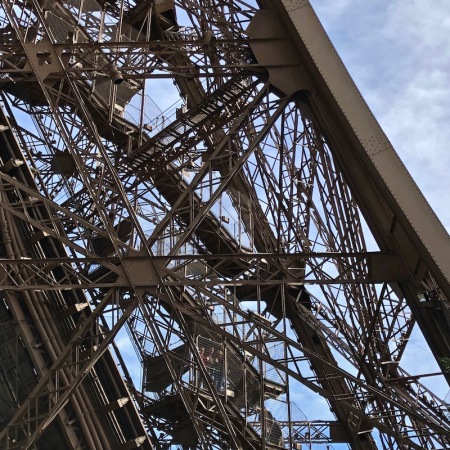 (Hint: we’re at the bottom of the photo, in the center.)

Laura also took a couple gorgeous pictures from underneath the tower: this one, pointed straight up in the exact center… 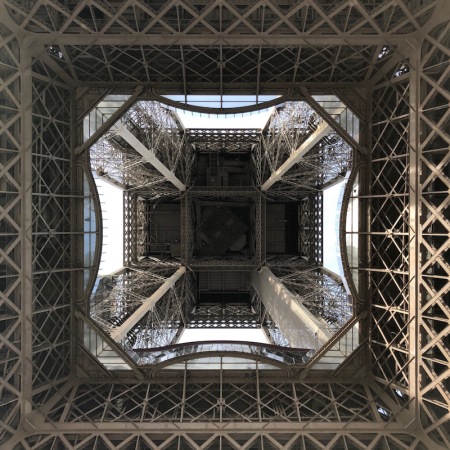 …and looking out towards the west, as the afternoon sun got lower. 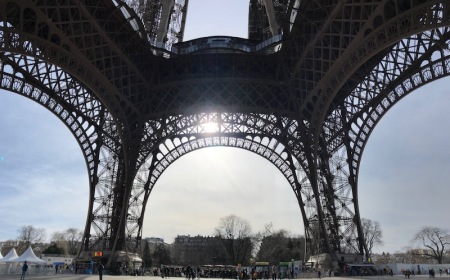 There’s a few areas, on the first floor, where the actual floor is glass, which is cool and terrifying. And I was able to get a nice shot of the stairwell from the first floor to the second: 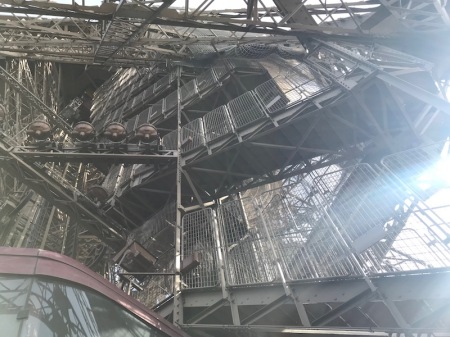 The stairwell, as a whole, was pretty hard to photograph in any sort of meaningful way, because it’s hard to pick out from all the surrounding iron.

A stranger took a group photo when we got to the second floor. 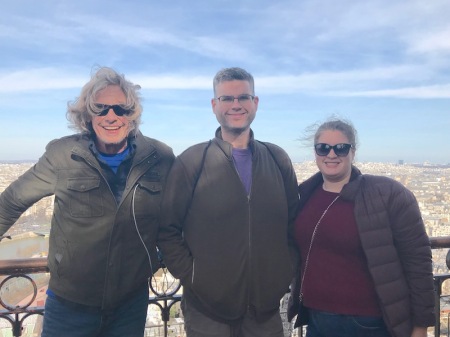 You’re not allowed to climb higher than the second floor, so this is where my reconnaissance stopped. Here’s the part of the tower that I climbed for the first time during the race: 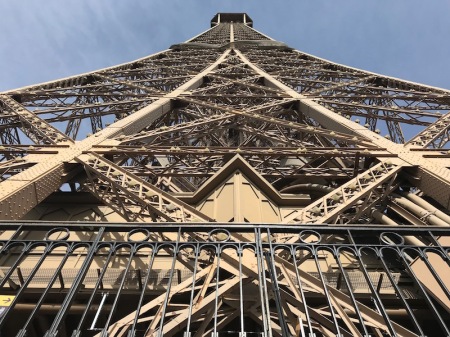 The reconnaissance was very successful – it came in handy during the race. So the outing was a success! And I got to spend some quality time with my sister on a whole different continent! Katherine joined us after, and the five of us enjoyed a late lunch. (Quiche and salad for me!)

One last quick thing to share: Sally Kalksma, the only American woman that competed in the Eiffel Tower Vertical this year, was the subject of a great article in the Philadephia Inquirer. She has a crazy inspiring story (she’s a cancer survivor), so definitely check it out. Plus – and this came as a complete surprise – they devoted a couple paragraphs to me! READ IT HERE.

This entry was posted on Friday, March 23rd, 2018 at 12:29 am and is filed under Uncategorized. You can follow any responses to this entry through the RSS 2.0 feed. You can leave a response, or trackback from your own site.