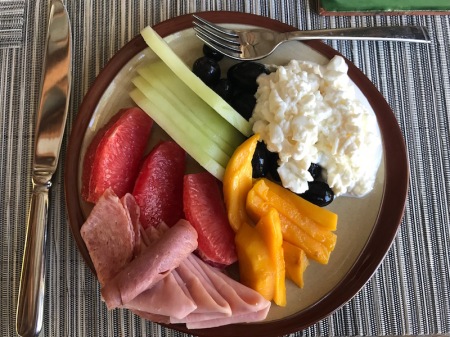 I haven’t eaten at many buffets since I started losing weight, and the thought of all the buffets was a bit daunting. After all, they make it so easy to make poor choices and overeat.

But I made it through the week with ease, and that’s partly because I gave myself some rules to follow. Here are four tips to remember the next time you’re at a buffet.

My general strategy for the week was to stay as low-carb as possible, and, actually, the buffets made that pretty easy. I just walked past the bread station, and even though they were making fresh tortillas for tacos on the spot, I skipped those too. In fact, I only ate about eight tortilla chips during the entire week, mostly as a vessel for some healthy guacamole. There was paella one night, and I really wanted to try it, so I limited myself to less than a cup’s worth.

There was one twenty-four hour period that served as an exception to my low-carb plan – the day that I got really sick. I ate something that didn’t agree with me, and I started feeling nauseous while scuba diving, 35 feet below the surface, as I passed a school of fish along a reef. I made it through the dive (which, feeling ill aside, was really great), but as soon as the dive was over, I barfed off the side of the boat. We returned to the beach, and a half hour later, I barfed again. I barfed a third time, a half hour after that. Then the diarrhea started. I pretty much expelled every foreign molecule out of my system, one way or another. Good times.

I slept the rest of the afternoon, and felt much better. But I decided to play it safe, and stick to cooked, non-greasy, non-acidic foods for a day, and ate bread and rice. I resumed my low-carb plan soon thereafter, and was fine the rest of the trip.

It was a really relaxing, lovely vacation. I tried out a fish spa treatment, where little fish called garra rufa nibble at your feet. They remove dead skin cells and supposedly provide a micro massage that improves circulation, but I don’t know if I believe that.

It did feel good, though, like my feet were getting tickled by dozens of tiny feathers for 20 minutes, and I’ve spent 10 bucks on a lot worse things.

I also had a hammock on the porch outside my room, and I loved hanging out in that (literally) and reading.

I also exercised. Every day. The resort had a small fitness center, and by the time we left, I had used every single piece of equipment in it.

I used the gym when it was too hot or humid to exercise outside – which was most parts of most days – but I got some outdoor activity in as well. Part of one day’s workout was a nearly-two-mile walk with my sister, sister-in-law, and niece. And I went in an early morning run one day, covering 3.9 miles, all the way to and from the little airport in town. 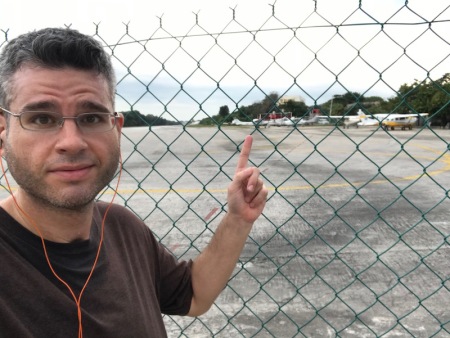 And, on my last full day in Mexico, I went open water swimming in the Caribbean. I swam back and forth between two buoys, which I later estimated, using Google Maps, to be about 1,000 feet apart. My sister joined me for part of it. All in all, I swam about 1.5 miles.

I’m leaving out one big story from my trip, about one of the adventures I had, because it was a life highlight and deserves a post all its own. I’ll share it in my next post!

This entry was posted on Wednesday, January 3rd, 2018 at 9:33 am and is filed under Uncategorized. You can follow any responses to this entry through the RSS 2.0 feed. You can leave a response, or trackback from your own site.