I ended my 2017 race calendar on a high note, along the shores of Lake Hodges in Escondido, California.

And much like the route of the 10K I ran, the story of how I got there is long and twisty, with lots of ups and downs. I’ve only known about this race for less than a week!

I’ve known for most of the year that I’d be racing on Sunday, December 10th. In fact, I signed up for a race on this day way back at the beginning of April. But it wasn’t this race, it was Hike the Halo, the annual stair race at Angel Stadium in Anaheim that I had done for four years in a row. I paid my registration and secured the fundraising dollars I needed, and was excited to participate… until they announced a few months back that this year’s race was cancelled.

What a bummer. The race director called me and promised they’d be back in 2018, but this year’s event couldn’t happen because of construction happening during the off-season at the stadium.

Luckily for me, I found a Plan B: a brand-new stair race in San Diego that was announced last month, also scheduled for Sunday, December 10th. I signed up, raised the fundraising dollars, and… on Monday, they called and said it was cancelled. Not enough people had signed up to make it worthwhile for the charity.

The one nice thing was that both races are going to defer my registration and fundraising for next year, so I can compete in 2018 without paying or raising any additional money. (They better not be scheduled on the same day, though!)

At this point, I had been planning on doing a race on December 10th for over eight months, so goddamnit, I was going to find a Plan C. And since I had coordinated to visit my aunt and uncle in the San Diego area when the San Diego race was announced, I started looking, less than a week ago, for a Plan C in their neck of the woods.

That’s when I found the Del Dios Trail Half Marathon and 10K – and it was only 15 minutes from my aunt and uncle’s house! Not wanting to jinx myself, I didn’t sign up ahead of time. I just showed up yesterday morning and registered on the spot. I don’t know if you’ve heard, but vast amounts of southern California are currently on fire, and I knew there was a chance that, thanks to air quality concerns from all the smoke, this race would too be cancelled. Luckily, it wasn’t, and it was a clear, smoke-free day.

I wore bib 1984, which is both a dystopian novel I read in high school and the year I was born (plus or minus five years). 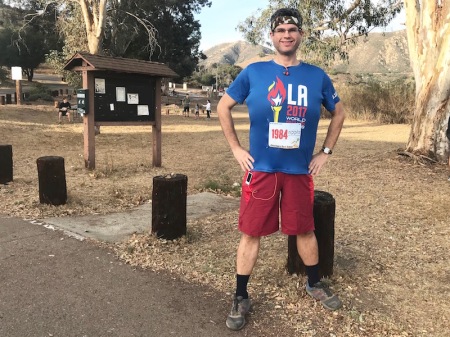 There were three races that morning: a 5K, a 10K, and a half marathon. I signed up for the 10K, and realized as I was waiting for it to begin that this was my first ever trail 10K!

I’ve only done one trail race before, at Malibu Creek last year, but that was only a 6K. All of a sudden my Plan C became a record-breaking race! (I’ve done other 10K races before, like the Coaster Run and the Bolder Boulder, but they were on roads.)

It was an out-and-back course. You run 5K east, following a ridge along the north shore of Lake Hodges, and then turn around and run the same route back. There was some elevation gain, but only about 400 feet. 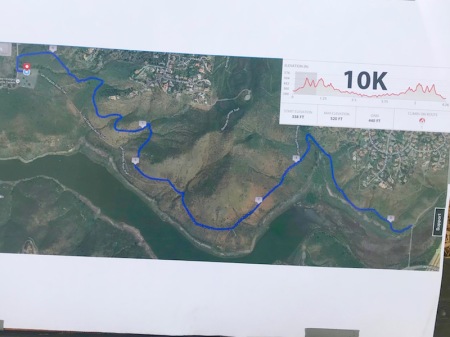 It was a challenging trail. Parts of it were very rocky and uneven, and other parts were incredibly sandy. Plus, it was extremely windy, and gusts of wind would pick up the dust being kicked up by runners ahead of me, resulting in a couple of stretches that were like running into a sandstorm. I had to block my face and everything.

But it was a beautiful course. Lake Hodges is a man-made reservoir, created when a river was dammed up, and it supplies water for residents in the area. It’s long and skinny, but parts of it are over 100 feet deep. 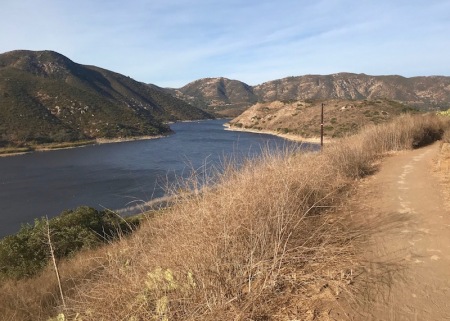 We had been warned that there was lots of cacti along the trail. We wouldn’t have to jump over it or anything, but since the trail was being used in both directions for the race, we were advised to be mindful in places where the trail was narrow. And they weren’t lying!

A guy I was talking to before the race gave me a heads up that there was a creek crossing along the route, and I suspected I might be splashing through it, but there was a tiny little bridge.

The nice part of about an out-and-back course is that you know exactly what the second half of the course was going to be, because you’ve already done it once. So, on the way back, I focused less on the course (except for the rocky parts that required really paying attention to where you were stepping) and more on trying to keep a consistent pace.

About a mile from the finish line, a guy in a blue and grey hoodie passed me, and I tried my damnedest to keep up with him. He stayed about 30 years ahead. I caught up a little bit during the uphill parts (thank you, stair racing, for making inclines the strongest parts of my runs!), but he reclaimed his lead on the flat parts. The final 100 yards were flat and straight, and I sprinted my little heart out, trying to catch up, and while I had a strong finish, he stayed ahead of me.

And check out this awesome finisher’s medal! It’s one of my favorites.

Plus, this was the first time in six months that I was able to use my heart rate monitor! I thought it was dead, but my father revived it with a new battery and it arrived the day before I drove down to Escondido. My average heart rate for the whole race was 156, and I maxed out at 178. Plus, I burned 974 calories!

This entry was posted on Monday, December 11th, 2017 at 7:55 am and is filed under Uncategorized. You can follow any responses to this entry through the RSS 2.0 feed. You can leave a response, or trackback from your own site.