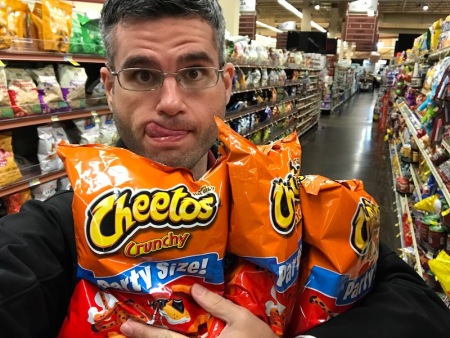 Kidding, kidding. What I really bought were ingredients for a delicious and healthy dinner that my sister Laura and I made at her place in Chicago.

We made Chicken Bacon Zucchini Twists. We were inspired by this Tasty.co recipe for Chicken Bacon Asparagus Twists, but we made some changes. That recipe calls for chicken breasts, but we used boneless skinless chicken thighs, which are both cheaper and more flavorful. And while we wanted to use asparagus, there was none at the store. Which wasn’t shocking, as it’s not the season for asparagus. So I bought the longest, straightest zucchini I could find, and then cut it into quarters lengthwise.

You can easily adjust this recipe up or down, based on how many you want to make. Start by preheating your oven to 400 degrees.

Cut each thigh in half lengthwise, and then cut each half lengthwise again, almost to the end, so you can straighten it and make one long strip of chicken.

We marinated the chicken in the marinade featured in the Tasty recipe (which has lemon juice, onion powder, garlic powder, salt, and pepper).

Cut each slice of bacon lengthwise, into two halves. Wrap a strip of bacon around a zucchini spear.

Then wrap a piece of marinated chicken around the zucchini and bacon.

We made 10 twists, which required 5 chicken thighs, 5 pieces of bacon, and 3 zucchini (and we had two unused pieces of zucchini left over). Laura assembled most of them.

We baked them off as Tasty recommended, and also made their dipping sauce (made of Greek yogurt, parsley, dill, lemon juice, and salt).

Check out the end result!

We roasted Brussels sprouts, leeks, and parsnips on the side, sprinkling them with a little salt, pepper, and olive oil. The lemon in the marinade and the dipping sauce added a really nice, bright, fresh element. We also garnished with a bit more fresh-chopped parsley.

The chicken bacon zucchini twists were delightful: flavorful chicken, crispy bacon, tender zucchini. It makes for a very pretty presentation, although it is a bit labor-intensive.

Try it now with zucchini, or bookmark this recipe and check it out again in the spring, when asparagus is in season, making it bountiful and cheap!

Check out all sorts of healthy recipes on my Recipes page!

This entry was posted on Wednesday, November 8th, 2017 at 9:07 pm and is filed under Uncategorized. You can follow any responses to this entry through the RSS 2.0 feed. You can leave a response, or trackback from your own site.