Saturday was a monumental day. A day for the history books! And it began as the sun was rising in Palm Springs, California.

Yup, that’s a race bib pinned to my shirt. I shared, a few weeks ago, my stair race itinerary for the rest of the year, but I didn’t mention this terribly grueling running race I was also signed up for. Grueling is the perfect adjective for this particular event!

It’s called the Tram Road Challenge, and it’s a 6K race that’s entirely uphill, on a road that heads into the mountains. The average incline is 12%, but it gets closer to 18% towards the end. In total, you cover about 2,000 feet of elevation change.

You can see the lighted road heading towards the mountains. That’s the route. I call this photo ‘Mountains with Shitters and Dumpster.’

At 7am, they sounded an air horn, and over 1,000 runners started up the long, never-ending hill. Here we are, awaiting our fate: 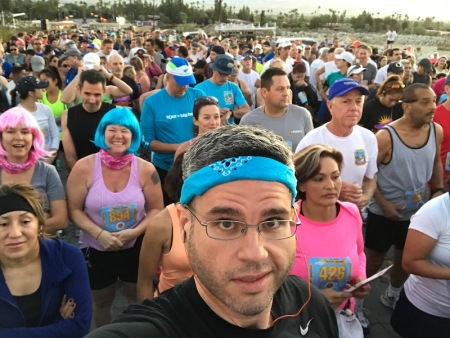 I kept reminding myself that I was well prepared for this. Last time around, I signed up 10 days in advance, and while I was in good shape, generally speaking, I couldn’t do much specific training for this. But this year, I’ve been training for weeks – hill repeats, my self-designed Bowflex challenge, and plenty of running I never even mentioned on here.

Even with all that preparation, I started feeling tired after a couple hundred yards because, you know, running uphill is HARD! I used my fellow runners to motivate me, identifying three others that were going at roughly my pace. There was a man with American flag socks (whom I’ll call ‘Socks’), a man wearing a compression sleeve on his left leg (‘Sleeve’), and a woman wearing a t-shirt from the local NBC news station (‘News’).

All of this was mind-trickery, so I wouldn’t think about the pain. Because I was hurting. This race is a beast. Luckily it’s in a gorgeous setting, so looking around helped take my mind off the pain, too! 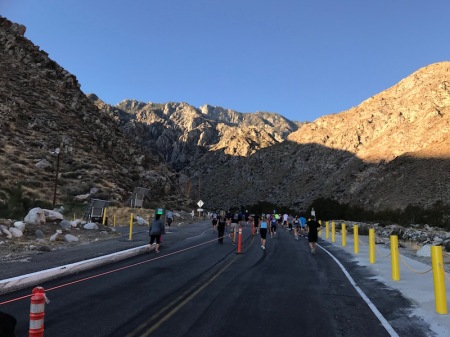 My time from 2015 was 1:00.46, and I felt pretty confident that I’d achieve a PR, but I didn’t want to pressure myself by setting any specific goals beyond the PR. Even though the race is 3.6 miles, I rounded it up to four in my mind, and told myself that if I could finish each mile in under 15 minutes, I’d be well on my way to a hearty PR. I also knew that each mile would get progressively harder, because each mile was steeper than the one before it, and I’d be more tired.

The fourth mile was actually only .6 of a mile, but it’s so steep by that point that all sense of distance goes out the window. There was a water station and a small crowd of people cheering us on at the 3 mile mark, and they had some funny signs. I used one of them, ‘WTF: Where’s the Finish?’ for the title of this post.

I tried not to look at my watch during that final .6 mile, and instead, just dug deep so I could finish strong. I saw News about 25 feet in front of me (Socks had long zoomed ahead, and Sleeve was way behind me), and tried my best to catch up with her before the finish line, and while I wasn’t able to, having her there probably led to a stronger finish than I could have mustered on my own.

I didn’t stop running until after I crossed the finish line. A volunteer handed me my medal, and I ducked under a crowd control rope and collapsed off to the side. It was there that I looked at my watch (a fancy one that Jeff had lent me), and I couldn’t believe my eyes: my time was 53:20. Wait, really, WHAT? That’s faster than last time by 7 minutes, 26 seconds!

The tears immediately poured out of my eyes and mixed with the sweat all over my face. I couldn’t believe it. Even my fantasy daydreams about how this race would go only ended with a PR of a minute or two. But I just finished with a 7:26 PR! It was the largest PR of my racing career, by far.

And I didn’t even mention that I power-walked part of the race! I was so exhausted towards the end, where it was so steep, that I switched back and forth from running to walking for about 1/2 a mile, ending with a run up the final 300 yards or so.

I composed myself, got some water, and watched a few people cross the finish line. 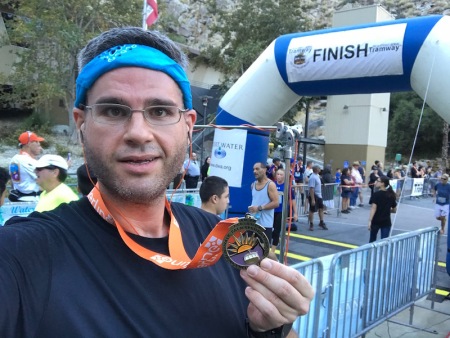 I soaked in the beauty of where I was standing, right there, in that moment, surrounded by mountains. It’s a staggeringly gorgeous place for a race finish.

You can see the finish line arch in the lower right corner.

And then I got my picture taken with Mr. Peanut! 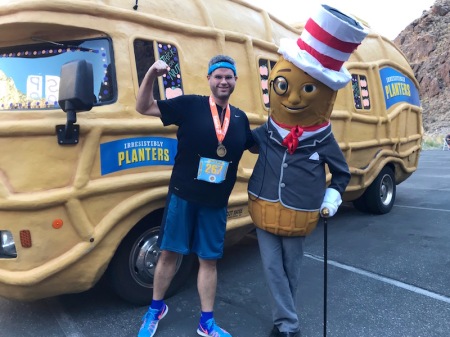 I found Jeff, who introduced me to a couple of his buddies. Jeff finished fourth in his age group – and one of the guys who beat him did the whole race barefoot. Whoa. Meanwhile, I finished 17th in my age group (out of 47th), and 212th overall, out of 1063 finishers. That means I finished roughly in the top 20% – a rare feat for me! My heart rate peaked at 180, and my average heart rate, over the entire 53 minutes, was 164 beats per minute.

Two days later, and I’m still stunned by my PR. I’ve been training hard lately, both for this and the upcoming stair races, and this is proof that my work is paying off. Big time.

More importantly, this race confirms one of the mantras that I’ve employed over the past seven years to help get me through tough periods and depressions, and it’s that I am capable of amazing things. For someone that struggled for so long with self-esteem and self-worth issues (and will continue to struggle with them), having this mantra has become pretty important to me. It’s a reminder, when I’m having a bad day or bad week, to look at the big picture. Because the big picture is pretty effin’ sweet!

I’m capable of running uphill for nearly four miles, and finish over seven minutes faster than last time. It’s moments like this one, at this race, that illustrate how my commitment to my health continues to reap enormous dividends. It’s amazing.

I am capable of amazing things.

PS: I made the local news! Watch the video HERE, and keep your eyes peeled at the 1:41 mark. Don’t blink! The woman that they’re talking about at that moment is the woman I was calling “News” in my head – turns out she’s a reporter for that local station! This is the third time I’ve been in the news this year. I was featured in the local paper in Springfield, Illinois, and was interviewed live in Minnesota!

This entry was posted on Monday, October 30th, 2017 at 12:35 am and is filed under Uncategorized. You can follow any responses to this entry through the RSS 2.0 feed. You can leave a response, or trackback from your own site.