Two Incredible Experiences, Back to Back: I Danced with Debbie Allen… and Spoke at the Getty Center!

What a fun couple days! On Sunday, I took a salsa dancing class from the legendary Debbie Allen. It was a blast!

Debbie Allen starred on the ’80s hit show Fame, and is currently on Grey’s Anatomy, playing Dr. Avery. (I don’t watch that show, but apparently she’s the mother of Dr. Jackson Avery, and her character is a leading expert in penile transplants!) Debbie is also a renowned dancer and choreographer, with her own Dance Academy nearby. She’s won three Emmy Awards for choreography, and is a highly-in-demand director, too, with tons of TV shows, including Grey’s Anatomy, Empire, Scandal, and Jane the Virgin under her belt.

There’s a performing arts center in Beverly Hills called the Wallis Annenberg. It’s only a few blocks from where Slimmons used to be. Once a month they host Dance Sundays, a big, free dance class on their terrace. Debbie teaches at many of them, and I went on Sunday for the salsa class.

Debbie is a great teacher. We learned a lot of steps, and she kept us moving nonstop for 45 minutes, with a band playing live the whole time, before giving us a little break. It was during that break that I got to meet her, briefly, and she was so sweet and gracious, gave me a big hug, and said she loved my smile and energy, and was so glad I came.

After the break, another choreographer took over, who taught for another 20-30 minutes, with Debbie next to him demonstrating the steps. His moves were more complicated, but I think I got the hang of it by the end. I don’t think I retained a single thing, but I bet if I went back it would come back to me pretty easily.

There was probably a hundred people dancing at the class, and the dancing continued after the class was over, but I had to split to make it to another commitment.

Then, the next day, I gave a motivational presentation at the Getty Center! The Getty Center is a gorgeous art museum on top of a mountain, in the heart of Los Angeles. It’s a huge, sprawling campus, and I’ve been a bunch of times. I’ve even blogged about it before: I recreated some old photos there, and the ‘befores’ and ‘afters’ are pretty fun.

There’s a on-site fitness center at the Getty, for the hundreds of employees that work there. My friend Lisa is the Program Director for the facility, and she invited me to speak to employees there, to share my weight loss journey and discuss my involvement with stair racing. 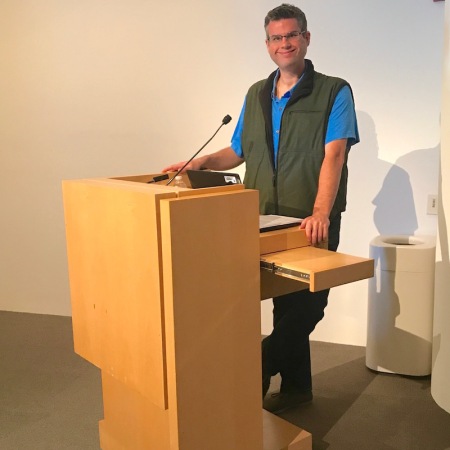 I put together a 30-minute presentation, with a slide show, and it went really well. I’ve done some public speaking in the past, but it’s been a while, but it was a really rewarding experience.  (Check out a video of my short presentation on stair racing here!)

First of all, I was in a spectacular setting. The Getty Center is an architectural masterpiece, and the view from the lecture hall was breathtaking. (They lowered the shades before my talk began, so people could see the projection screen.) 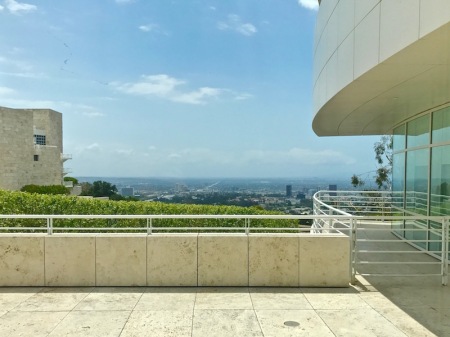 More importantly, the audience seemed to really dig it. I got a lot of compliments afterward, and hopefully I inspired some folks to make some healthy changes.The process of preparing and rehearsing for the presentation reminded me of so much that I’ve learned and experienced over the last seven years, so it was a really worthwhile endeavor for me, too.

Plus, I drew a custom maze for the event, which we raffled off afterward. While the Getty Center is on top of a hill, visitor parking is at the bottom. There’s a tram that you ride to get to the top. So for the maze, the goal is to skip the tram and find your way up the road. The young lady that won it was really excited, so that was pretty cool, too!

Check out more of my mazes here.

Lisa gave me a little tour of the gym, which is officially called Spa Getty. (It was clearly named by someone with a sense of humor who likes wordplay, since there’s not really any spa amenities at all.) It’s a great facility, with lots of cardio machines, weight training equipment, and a group fitness classroom.

Here’s something I really loved: not too far from the gym are a pair of vending machines, loaded with soda and junk food. The money that’s spent at those machines all goes to the gym. Last year, Spa Getty received $30,000 from the sale of Pepsi and potato chips to spend on new and improved equipment and machines!

This entry was posted on Tuesday, May 16th, 2017 at 1:28 am and is filed under Uncategorized. You can follow any responses to this entry through the RSS 2.0 feed. You can leave a response, or trackback from your own site.