The Simple Walking Workout That Wore Me Out

I don’t give myself a break from exercise after a race. No resting on my laurels here! Instead, I take a rest day on the day before, so I’m ready to go on race morning. That meant I was due for a workout the day after my hour-long stair race in Springfield, and I couldn’t skip it. Yes, I was achy and sore, but I gotta do what I gotta do. I decided to keep it easy and light… until I stepped on a cardio machine that had other ideas.

The machine is called a Mobia, and it was introduced by Nautilus in 2009. It takes a simple, familiar motion – walking – and ramps it up into a challenging cardio workout.

It’s kinda like a treadmill, but with two key differences:

The result is a low-impact, incline walk that is more intense than expected. I also found that the two separate belts kept me feeling slightly off-balance a lot of the time, which made me naturally tighten my core. That’s more engaged muscles and more calories burned!

The Mobia isn’t designed for running – its top speed is four MPH. I hovered around three MPH for my workout, and, before long, I was sweating plenty.

My workout lasted 49 minutes. I kept going strong for 45, and then cooled down for those final moments. All I had wanted when I stepped on the Mobia was a light, breezy walk – just some activity under my belt before I sat on an airplane for five hours that evening. But by the time I stepped off, I was as sweaty as I am after a long session on my Max Trainer or in a stairwell. My shirt is soaked all the way down to my waist! 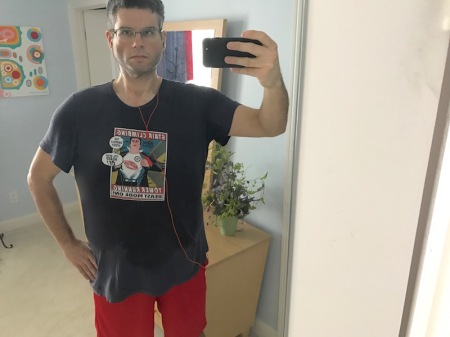 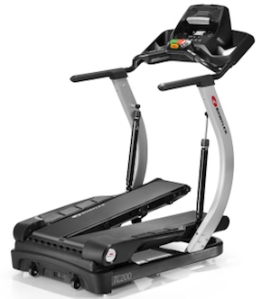 The TreadClimber is a much more high-tech, slicker version of the same machine. It has the two treads, the built-in low-impact, incline mechanisms, and a bunch of other features, like different workout programs, a display that tracks your heart rate, and an accompanying app that helps you set, monitor and reach your fitness goals. I use two other Bowflex apps, and it’s really fun to have all sorts of data at your fingertips.

The Mobia was a great final workout during my long weekend in Springfield. (See what else I did here.) And the workouts continued when I got back to Los Angeles. In fact, I’m heading out in a little while to go climb a skyscraper a few times. I gotta stay strong and in shape… my next stair race is only eight days away!

This entry was posted on Saturday, March 18th, 2017 at 9:13 am and is filed under Uncategorized. You can follow any responses to this entry through the RSS 2.0 feed. You can leave a response, or trackback from your own site.