Springfield, Illinois isn’t a bustling metropolis, but it does have it’s own airport. It’s tiny – only four gates – and I flew there on small, 50-seater plane, where I had an aisle and window seat at the same time. 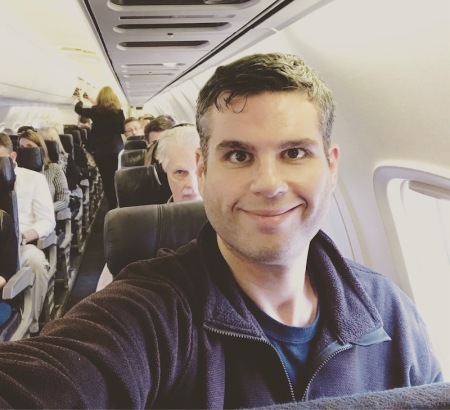 I’m a lot smaller than I used to be, but I’m still a big, 6’4″ guy. And having an aisle seat with a view, and no neighbors to bump with my broad shoulders, was the best. Such a difference from how I used to feel on planes. It was the start of an excellent weekend! And it began, before I even got on that little plane, with a celebrity sighting at LAX.

Justin Hartley, who plays Kevin on “This Is Us,” was near me in the security line. I wanted to tell him I’m a big fan of the show, and that it inspired me to do a killer stair workout. I also wanted to tell him that I was a huge fan of “Passions,” a soap opera he was on ten years ago, and that we met once before, at a “Passions” fan club meet-and-greet that I volunteered at as a bouncer (kind of)…. but I didn’t say anything. And that was the right choice.

My reasons to visit Springfield were two-fold: to compete in a stair race, which I’ve already talked about at length, and to visit Philip and Mary, my uncle and aunt. I also got to see one of my cousins, Camille, who happened to be in town, too, so that was a fun surprise. Oh, and they have two dogs, Javier and Owen, that are awesome. 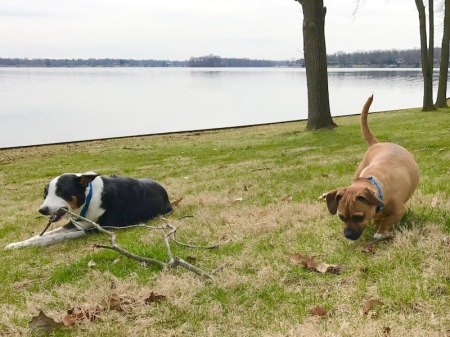 We ate a lot at their house. My aunt made some delicious eggs, topped with avocado, that I ate for breakfast with berries. For dinner one night, Mary made cod in a tomato sauce, like my grandmother used to make. And one my final day, Mary introduced me to Tonnino jarred tuna, which is delicious. 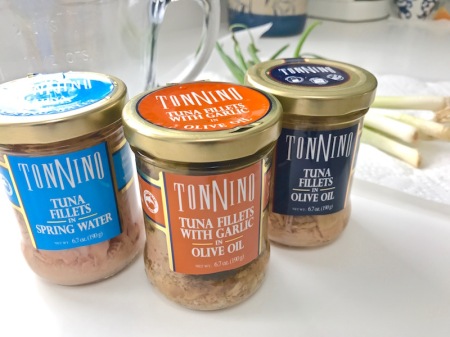 There’s huge fillets in the jars, instead of scraps and shreds, like you find in a lot of canned tuna. 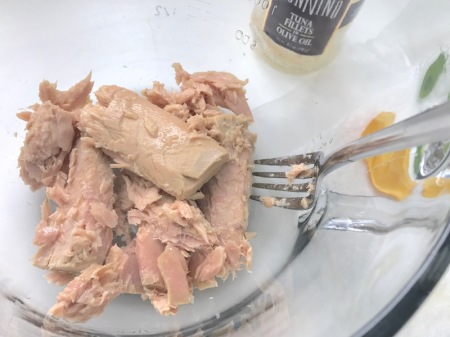 I made tuna salad, with mayo, spicy brown mustard, scallions, celery, relish, pepper, and a squeeze of lemon. 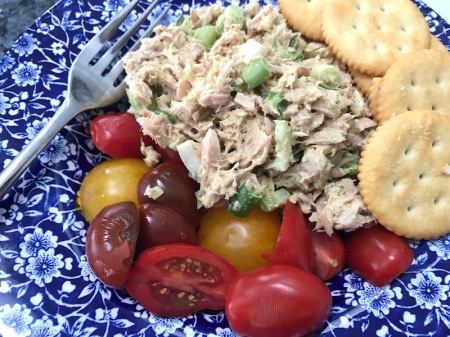 For lunch one day, we picked up some sushi – and split two menu items between the three of us. 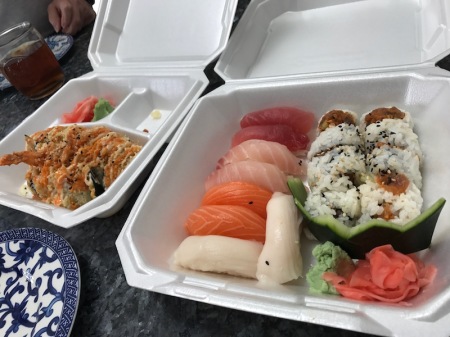 On the night before the race, Philip and Mary took me out for a belated birthday dinner. (Here’s how I celebrated my birthday last weekend!) We went to Cooper’s Hawk Winery, where we shared the drunken shrimp appetizer. 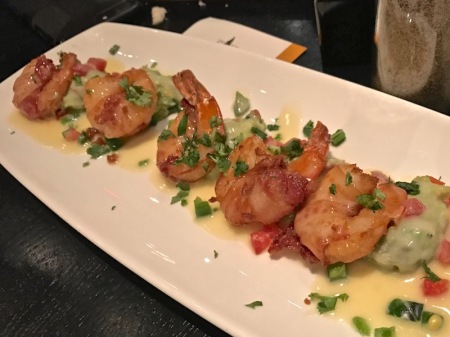 They have a whole section of their menu called Life Balance, where everything is 600 calories or less, and I ordered the salmon entree off that page, which came with spinach and roasted potatoes (which are underneath): 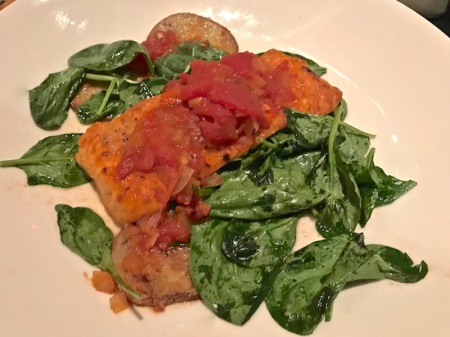 And they brought us a chocolate-covered strawberry and a white chocolate truffle, because it was my birthday, and I cut each one into thirds so we all could try them. 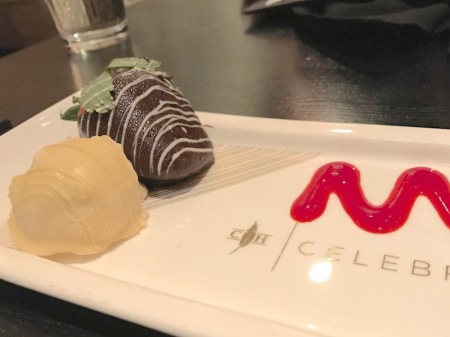 This was also the trip where I tried paraffin wax for the first time. You coat your hands in hot wax, and it moisturizes them and provides other heat-therapy-related benefits to your joints and blood vessels. 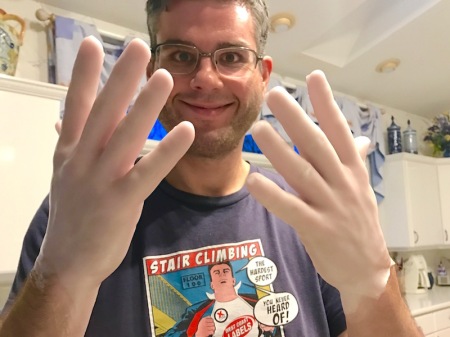 My hands were very soft afterwards, and the best part was peeling off the wax. It doesn’t hurt – it’s nothing like the wax that’s used to remove unwanted hair. It reminded me of peeling dried Elmer’s glue off my fingertips as a kid, except on a much grander scale.

The day before the race, I wanted to get some casual, non-strenuous activity in, so we walked Javier and Owen for about an hour. At one point I bent over to tie my shoe, and my nose started bleeding. This didn’t surprise me – I’ve been prone to nosebleeds my entire life. I even got one last year in the middle of a stair race, and this year during a stair training session.

Philip is a surgeon, and said he could cauterize the inside of my nose, as a way to prevent nosebleeds, and so we went to his office a little later that day.

Cauterizing involves burning the skin, via heat or chemicals, so that scar tissue forms, thickening the skin. He examined the inside of my nostril and saw clusters of blood vessels near the surface, so he numbed the area, then burned the heck out of them. The whole thing took about 15 minutes, and was completely painless, except for very mild discomfort when the numbing agent wore off a couple hours later. You know when you’re outside in the dead of winter and a booger freezes in your nose? It felt like that.

The only photo I took during the whole procedure was of the stairwell in Philip’s clinic. He started taking the stairs every day at work, after getting inspired by me, and he’s done it for years. Stairwells with windows are very rare – I’d take these stairs every day too! 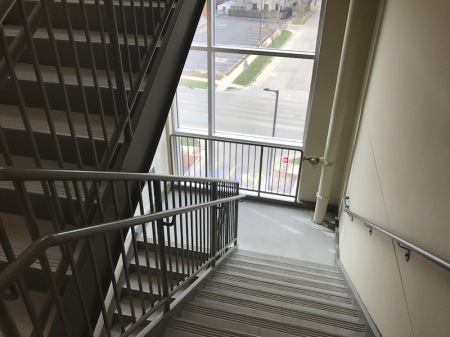 I woke up on the day I was leaving to a couple inches of snow on the ground. It was lovely. 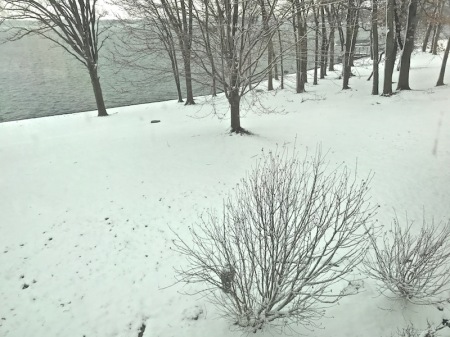 It made flying back to Los Angeles difficult – it involved two delayed flights, one missed connection, and waiting on standby for another flight. But I made it back in one piece, about four hours later than originally planned. (I really can’t complain. My travels were a cake walk compared to the millions of people stuck in the east coast blizzard this week.)

There were two things that redeemed the trip. Once we got above the clouds, it was absolutely beautiful. 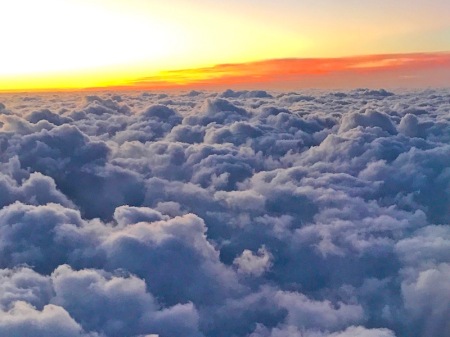 Plus, I watched “Florence Foster Jenkins” on the plane, which I absolutely adored. So funny, so touching, and astounding performances by Meryl Streep, High Grant, Simon Helberg, and, in a smaller role, Nina Arianda. Go watch it and enjoy!

Now I’m back in Los Angeles. I had an excellent time in Springfield – another trip built around smart choices, fun times, and… oh yes, a positively diabolical stair race!

There’s one more Springfield workout I haven’t shared yet… but I will in an upcoming post!

This entry was posted on Wednesday, March 15th, 2017 at 1:04 am and is filed under Uncategorized. You can follow any responses to this entry through the RSS 2.0 feed. You can leave a response, or trackback from your own site.

9 Responses to Good Eats, Paraffin Wax, and an Unplanned Medical Procedure: My Weekend in Springfield, Illinois