The End of One of the Greatest Chapters of My Life: Richard Simmons is Closing Down Slimmons

I got some heartbreaking news today. Richard Simmons is closing his fitness studio, Slimmons. The last day will be November 19th. I was told this in a mass email sent by the manager.

I’m experiencing a whirlwind of feelings surrounding this news, and the predominant one is, well, heartbreak. It’s devastating news.

I have a strong personal connection to Slimmons. It was where, after meeting Richard Simmons for the first time, I got to check in with him on a regular basis. Richard helped me lose 160 pounds – weight I’ve kept off for 5 years and counting – and taking his classes there were a big part of my success.

Richard’s classes at Slimmons were an extraordinary experience that cannot be replicated. His energy and enthusiasm were infectious, and no matter how I felt when I walked in the door, I left feeling joyful, inspired, and better about myself. It is everything you could ever want from a group fitness class, and so much more.

Richard stopped teaching in early 2014 when he disappeared from the public eye, but that didn’t stop me from going to Slimmons and taking classes with the other instructors. Even though I haven’t talked with or seen Richard in nearly three years, I value our friendship, and the role he’s played in improving my health and my life. That room in Slimmons is where I started changing the way I think about myself, and where Richard motivated and pushed me to take a bigger role in my own well-being. I value our friendship immensely, and going to Slimmons during his absence is one way I could support Richard.

So I’ve gone, a few times a month, for the past 32 months. I’ve seen the class sizes dwindle, the interest fade, and I talked with my friends there about the crazy tabloid stories and the phone interviews he gave “Today” and “Entertainment Tonight.” I go to support Richard, of course, but I go for me, too. I get a great workout, and just walking in the door strengthens my resolve to, well, keep it up. I’ve come a long way. Richard helped me get the ball rolling, but I’ve run with it, and I haven’t looked back.

The saddest part about Slimmons closing is that it most likely signals Richard’s permanent retirement from his career and the public eye. I’ve always held out a glimmer of hope that Richard would return, in some form or capacity, to entertain, teach, and inspire the masses. He told Savannah Guthrie that he was going to do exactly that, “stronger than ever!” And that glimmer was supported by the fact that he kept Slimmons open for so long. Slimmons was his baby, the place that put him on the map, and by keeping it open, he was giving himself a place to come home to. Slimmons represented a safe, nurturing environment – one that Richard created himself. And on November 19th, it will be gone.

I don’t know if Richard will show up for the final class at Slimmons or not. I suspect he won’t, but I’ll be first in line to give him a giant hug if he does. I’ll be there, regardless. It won’t be easy saying good-bye to a simple workout room that means so much to me, but I wouldn’t miss this opportunity for anything in the world. 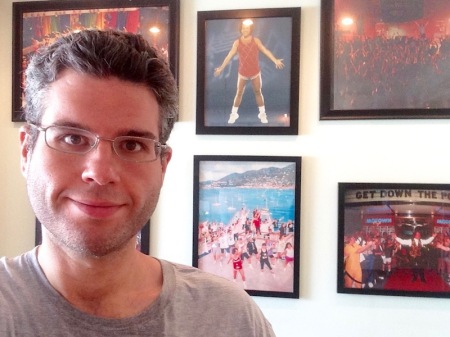 I’ll have plenty more to say, I’m sure, about Richard and Slimmons. There’s a lot I’m still processing. In the meantime, I wish, as always, that Richard is happy and healthy. That’s the most important thing. I’m also thankful for everything he’s done for me and so many other people. Richard started me on a wonderful, amazing path, and I’m still on it, working hard, and I hope Richard knows it.

This entry was posted on Friday, October 21st, 2016 at 2:33 pm and is filed under Uncategorized. You can follow any responses to this entry through the RSS 2.0 feed. You can leave a response, or trackback from your own site.

20 Responses to The End of One of the Greatest Chapters of My Life: Richard Simmons is Closing Down Slimmons