In August, when I got back to Los Angeles after six weeks out of town, the first thing I did was pick up my dog Maude’s remains.

I ended up leaving town two days after her passing, but I made arrangements with the crematory before leaving, and they kindly held her ashes until I got back. I didn’t know what to expect as I drove to the crematory, wedged between an auto parts scrapyard and a landfill, but they were very friendly and respectful, and I left with a labeled paint can, presented in a gift box.

I sat in my car in the parking lot, reunited with my girl, and took a few deep breaths. The most gorgeous song, one I’d never heard before, started playing on the radio. It was slow and thoughtful, melancholy yet uplifting, simple and textured. The song was still playing as I started driving home. I remember glancing over and seeing the sun pouring through the windows and reflecting off the rim of the can, little bursts of light dancing in the passenger seat, and it brought me peace and closure.

I later figured out that it was a new Radiohead song called “Daydreaming,” and now I can’t listen to it without thinking about Maude and smiling.

As the day passed, I realized my connection to the can of ashes was mostly symbolic. Yes, it’s what’s left of my girl, but it’s not really her. My memories, photos, and stories will always be more powerful.

I decided to scatter the ashes. Maude spent years in the rescue system, pent up in kennels and shelters. I wanted her final resting place to be peaceful, and I wanted her to be in nature. More importantly, I wanted it to be somewhere she loved.

I took her on a hike once, and part of the route was along a creek bed in a canyon. The trail was washed out for a lot of it, so we were crossing back and forth, me trying to stay dry (and failing), and Maude charging into the water, jumping from rocks, and looking back at me, as if to ask, What’s the hold-up? C’mon, let’s go faster! She was having a blast.

This weekend, a few friends joined me, and we returned to that canyon, where were navigated the same creek bed. (I failed again at keeping dry.) The creek babbled and gurgled around rocks and down miniature waterfalls. I found a secluded area, surrounded by high rocks. It was private, with the only sound coming from water cascading down a two-foot cliff and into a basin. I looked up, saw the sun streaming through the branches, and felt the same sense of peace that I felt in the car. This was the place.

I said a few things there, opened the can and released Maude so she could forever run and jump and splash in beautiful, lush surroundings. My friends took video and photos, but I’m not going to share them. I’m not even going to keep them. This experience can live in that moment and in my mind.

A few weeks ago, I had one of my favorite photos of Maude mounted onto a wood panel that I’m going to hang on the wall. (It sounds fancy, but I ordered it through Walgreen’s.)

I’m going to take the photo of the sunlight streaming through the branches, and have it mounted on an identical panel, so I can always be reminded of my time with Maude, as well as the canyon that she now calls home.

My friend Sam, an artist, also surprised me with a memorial: a little watercolor painting of Maude that I absolutely adore.

I’ll find a home for this, too.

Spreading the ashes turned out to be the first part of a very nice, long hike. My friends Tavi, Jonathan, and Jeff (who also came along with me and Maude when we first visited the canyon) and I spent about four hours in the woods, following the creek, visiting some ruins, and then climbing up along a mountain ridge. We hiked 4.7 miles. I’m so thankful they were all a part of this excursion. 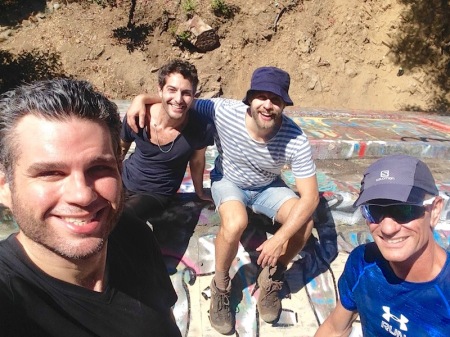 The bad news is that I rolled or twisted my foot, and aggravated the injury that just healed a couple weeks ago. I was able to finish the hike, but there’s pain, so I’m back to icing it, elevating it, and I’m going to stay off it for the time being.

This entry was posted on Sunday, September 18th, 2016 at 11:05 pm and is filed under Uncategorized. You can follow any responses to this entry through the RSS 2.0 feed. You can leave a response, or trackback from your own site.