My sister Sarah and niece Allison are visiting from Colorado this weekend, and we had a long, full day. We ate out twice, and I made smart choices each time. Since I photographed those meals, why not share them, and some other photos, too?!

We started it with a nice walk with Maude to the coffee shop and back – about 1.5 miles total. I split my breakfast up: before the walk, I made a green juice (spinach, almond/coconut milk, cucumber, banana, a few strawberries). After the walk, Sarah made eggs, so I had two of those, with a corn tortilla, avocado and tomato.

Then we jumped in the car and headed an hour south to Costa Mesa, a city in Orange County. We had tickets to “Newsies,” the Broadway musical that’s currently on tour. We gave ourselves plenty of time to get lunch, and we settled on a Red Robin that was about a 1/2 mile walk from the theater. I got their fiery ghost style burger, which has some sort of spicy sauce and jalapenos, but got it wrapped in lettuce instead of a bun. Sarah got the same thing, but had them swap out the beef for a turkey burger. 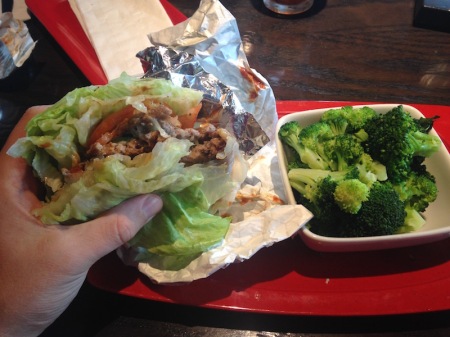 My side was steamed broccoli. Red Robin prominently features bottomless fries in all their advertising, but I learned on this visit that they also offer bottomless broccoli. That’s a sweet deal for a health nut. I ate two bowls, and would’ve had more if we didn’t have the play to get to.

“Newsies” was a really fun time. It’s a very high-energy, dance-heavy show, and it has in incredible set, featuring huge fire escapes that slide back and forth and rotate. Each of the three fire escape units has about 25 steps to the top, and that cast was flying up and down the stairs throughout the show. Between that and the dance numbers, I can’t even imagine how many calories the cast burns in one show… and they do eight a week! 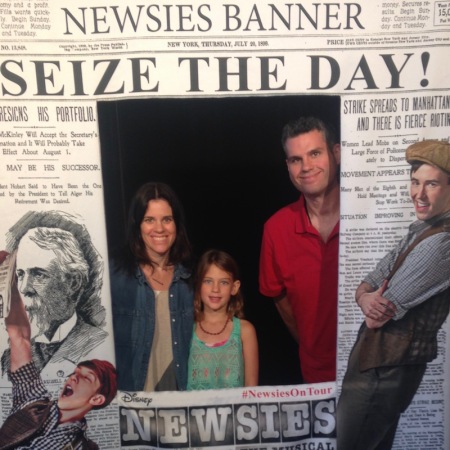 (This post is titled ‘Seize the Day’ because that’s the name of one of the big numbers from “Newsies.”)

After the show we ran a couple errands, and then ended up in Newport Beach, where we walked around and rode a little ferris wheel.

That guy in pink plaid in the next car was pretty funny. His daughters were too short to ride without an adult, so he reluctantly joined them, and screamed the whole time. He was clearly afraid of heights. At one point he was yelling “Forest Lawn, here I come!” and that’s funny because Forest Lawn is the name of multiple cemeteries around town.

From there we walked to the end of Balboa Pier, where we had dinner at Ruby’s Diner. It was chilly out, so I got a cup of chili (naturally), and a cobb salad.

Sarah had promised Allison ice cream, and we planned on going to Menchie’s frozen yogurt on the way home (it’s 10 minutes from my house), but Allison fell asleep in the car, so we skipped it.

Ten hours later, we got back, and Maude and I immediately headed out for a 1/2 mile walk. Even though I had a fantastic time with Sarah and Allison, I couldn’t help but think of my special girl. She was very happy to see me.

Tomorrow we’re having our aunt, uncle and cousins over for dinner, and Sarah and I are going to cook, after we pick up some ingredients at the farmers market. I’ll share the recipe in my next post.

This entry was posted on Saturday, May 28th, 2016 at 11:34 pm and is filed under Uncategorized. You can follow any responses to this entry through the RSS 2.0 feed. You can leave a response, or trackback from your own site.

2 Responses to Seize the Day! (An Orange County Outing)