A Weekend of Food in Colorado

My stair race on Sunday was obviously a huge reason why I went to Colorado last weekend, but it’s always great to see family, and I love spending time with my sister, brother-in-law, nephew, and niece. I didn’t take many other photos while I was there… except of everything I ate!

Well, most everything. A few things fell between the cracks.

My favorite thing I ate all weekend was actually a movie snack. We saw “Zoolander 2” at a movie theater called Cinebarre. They have servers that bring food and drinks to you at your seat, and they had kale chips on the menu. They were salty, crispy, delicious. All the things you want in a movie snack!

“Zoolander 2,” by the way, was terrible. We all agreed. And we’re all fans of the first one! Skip it, or wait until it’s on HBO or Redbox or running on a continuous loop on TBS.

We only ate out once, at a local sports bar and restaurant called Mudrock’s, where my nephew’s basketball team was having an end-of-season party. I got their cobb salad, which was the exact same thing I got there when I visited in the fall.

It’s good. Nothing extraordinary, but it hit the spot, and I was starving. My ordering it a second time wasn’t because it was amazing – it’s because the menu, which is mostly bar food staples, doesn’t have many healthy options.

We ate a lot at my sister Sarah’s place. We all sorta did our own thing the night before the race, and I picked up, at the store, this Birds Eye Buffalo Cauliflower, which I loved. Basically caulifower coated with buffalo wing sauce, and you nuke it in its own bag. Lots of good, spicy flavor. I ate it with additional non-buffaloed veggies and a garden burger.

One morning I made scrambled egg whites with onion, smoked salmon, and cream cheese, with some carrots and ham on the side.

And for lunch, Sarah and I made a tuna salad, where we mixed the tuna with a little mayo, mustard, and pickles, and loaded it on top of a salad blend.

We made a nice family dinner my final night. Sarah baked chicken breasts and thighs with teriyaki sauce, and I made brown rice. Together, we made a veggie stir-fry with broccoli, asparagus, yellow pepper, and baby corn, with a homemade peanut-teriyaki sauce. It all came together great, and even the kids (who are finicky) ate it.

My flight home was early in the morning, and I slept through my alarm. Whoops! I still made my flight, but I didn’t eat anything before leaving, so I bought a salad at the airport and ate it while waiting to board. 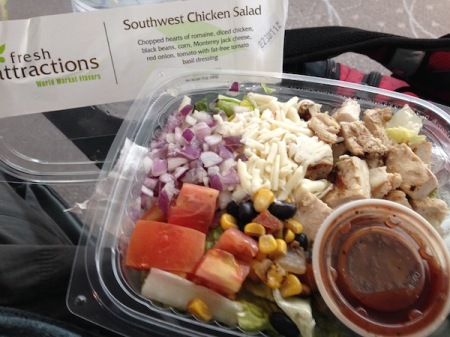 What am I missing? Let’s see…

There might be a small item or two that I’m forgetting, but all in all, it was a healthy weekend.

This entry was posted on Wednesday, February 24th, 2016 at 12:45 am and is filed under Uncategorized. You can follow any responses to this entry through the RSS 2.0 feed. You can leave a response, or trackback from your own site.

2 Responses to A Weekend of Food in Colorado