What happens when my sister Sarah and brother-in-law Justin take off for a weekend trip to Chicago? I head to their home in Colorado to babysit my nephew Sam and my niece Allison! And what a fun weekend it was. Exhausting, too. Turns out that kids aged 9 and 7 have a lot of energy!

I took my nephew Sam to his flag football game, where he caught two interceptions and ran them both in for touchdowns: 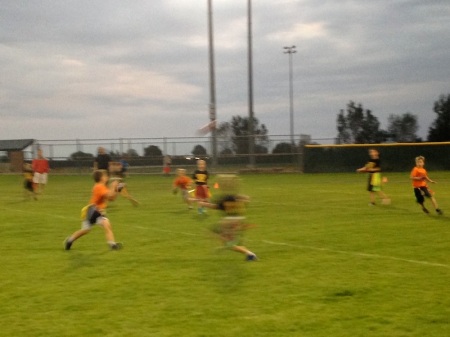 I don’t know a lick about football, but I did learn that what Sam did (twice) was called a ‘pick 6’ – so there’s your fun fact for the day.

It was a pigskin-filled weekend. We went to a local restaurant called Mudrock’s Tap and Tavern to watch the Michigan football game – GO BLUE! The Wolverines crushed the UNLV Rebels, and we watched on the TVs, played video games and foosball, and had drawing contests that we forced our server to judge. We also had lunch: a chopped salad for me, dressing on the side:

That’s my entry for the horse drawing contest to the right!

Oh, and Sam and Allison won TWO stuffed animals from that arcade claw game that generally hoovers up quarters like a vacuum – but they made out like bandits!

Sam spent the night at a friend’s house one evening, so Allison and I had a special night. I made her whatever she wanted for dinner, and she picked mac and cheese, with meatballs on the side. I had a frustrating 15 minutes trying to find a colander in Sarah and Justin’s kitchen, to no avail (I ended up draining the macaroni very slowly and carefully in a tiny little strainer I did find). Naturally, the next morning, it was the first thing I saw – it was hiding in plain sight the whole time!

For my dinner, I made a few meatballs for myself, but skipped the mac and cheese, and instead sauteed veggies in a little barbeque sauce:

Then we went out for frozen yogurt at a nearby Menchie’s. I got a variety of fruit-flavored sorbets, with blueberries, almonds, and a single cherry on top. 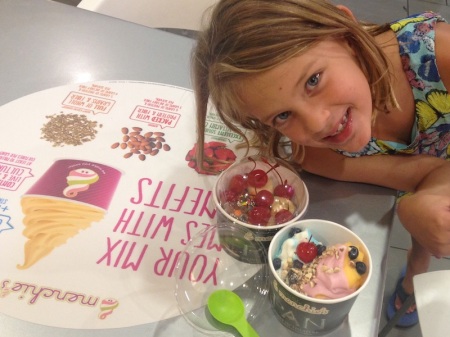 We capped off the evening by watching the live-action “Cinderella” movie that came out earlier this year, and we both loved it.

I have to say, eating the way I want to eat is a LOT harder when I’m also responsible for other people’s meals – especially when those other people are children. I have a lot of respect and admiration for all the people out there who are working hard to lose weight, keep weight off, or just stay healthy in homes where there can be a lot more temptation or choice. If this is you, KEEP IT UP!

I did my best to eat well. I made pancakes one morning with Allison, and we mashed some banana into the batter, and added sliced bananas on top. I limited myself to two pancakes, showed restraint with the syrup, and added an orange to my plate, too. 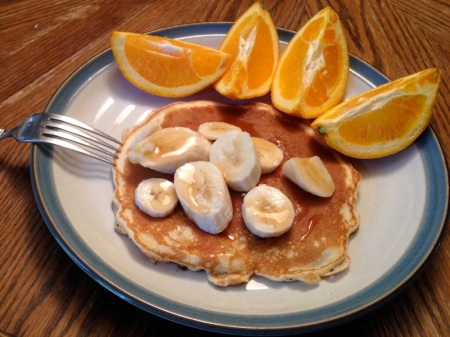 I posted more photos of my meals on Twitter, so visit my feed (I’m @keepitupdavid) to check them out.

The biggest problem I had was late-night snacking. Because of the kids, dinner was earlier than I usually eat, and each night I found myself hungry around 9 or 10pm. Sarah and Justin have a lot of snacky stuff in their pantry, and my self-control fell apart.

At least I stayed active. Sam and Allison kept me on my toes, generally speaking, but I got in some workouts, too. One morning I did a workout DVD while the kids played in another room. (It was a cardio hip-hop dance DVD, and I managed to learn, oh, 10% of the choreography. But I tried, and stayed moving the whole time, so it was an exercise success.)  One afternoon, the kids and I rode bikes to a nearby lake, and I rode laps around the lake (2.7 miles total) while the kids tried to catch grasshoppers and minnows.

I also fit in two great bike rides, one before Sarah and Justin left, and this one, after they returned:

I set four personal records during this ride: greatest distance (16.4 miles), longest duration (almost 1 hour, 37 minutes), most calories burned (1,280 according to RunKeeper, 1,084 according to my heart rate monitor), and greatest elevation gain (2,951 feet). Full disclosure: the only times I ride are when I’m in Colorado, where I can borrow Justin’s bike, so setting personal records isn’t too difficult. Although I just made it a lot harder for next time!

This part of Colorado is great for biking. The roads all have bike lanes, and there’s tons of dedicated open space, and lots of trails.

Plus, who can resist these views? 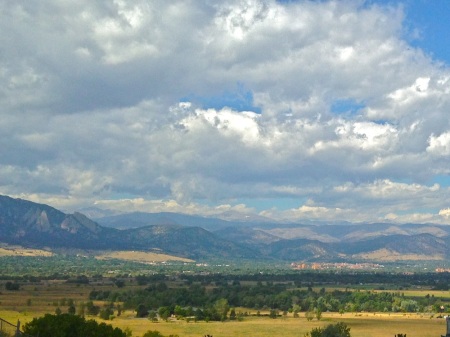 All in all, it was a quick trip, but great to spend time with my niece and nephew. They enjoyed themselves, I enjoyed myself – and that’s the most important thing, right?

This entry was posted on Sunday, September 20th, 2015 at 11:10 pm and is filed under Uncategorized. You can follow any responses to this entry through the RSS 2.0 feed. You can leave a response, or trackback from your own site.

4 Responses to Adventures in Babysitting