I spent four jam-packed days in New York City. While the One World Trade Center stair race was a huge deal, I had many other adventures and took photos chronicling them. There’s a lot to share, so I’m splitting them into two posts. Today’s will be about food; tomorrow’s will be about movement.

Eating healthy while traveling is no easy feat, and I ended up eating a vast majority of my meals at restaurants. I stayed at my friend Aaron’s apartment, who very generously offered his place while he and his wife and baby were out of town. For breakfasts, I bought fruit and veggies at the corner store: bananas, apples, blueberries, baby carrots, broccoli. I wanted clean, fresh, raw food to get me going. That way, I could save calories for the restaurants, and not feel guilty about ordering what I wanted (although I tried to make smart choices as much as possible). I also got a couple protein shakes for the morning of the race.

Speaking of the race, I posted two new post-race photos from the event photographer on Facebook, Instagram, and Twitter. Check them out when you have a second!

So what did I order at the restaurants? Let’s go to the pictures! I’ll start in an entirely different state: New Jersey. My friends Heather and Adam live right across the Hudson river in Hoboken, and I went over there to hang out one afternoon. We went for a good long walk (more on that tomorrow) and during it, ended up at Bin14 for lunch.

We had a lovely meal. Bin14 has a lot of shareable small plates on the menu, and we split their delicious Deviled Duck Eggs. 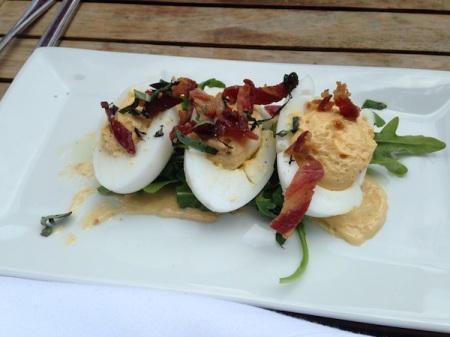 Deviled eggs have had a resurgence lately, and in the past few months, I’ve had deviled chicken eggs, quail eggs, and now duck eggs at various restaurants. It’s a trend that I won’t get tired of! These had bacon on top and sriracha in the yolk mixture, and the bit of heat was a nice touch.

Then I had their beet, blood orange, and pistachio salad (dressing on the side)… 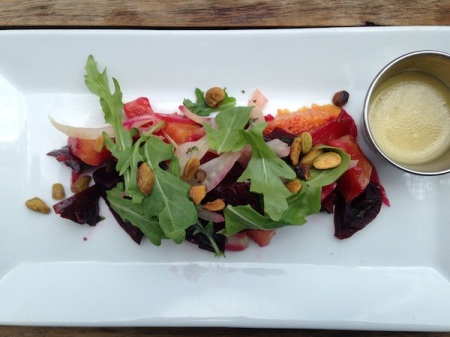 …and their roasted cauliflower: 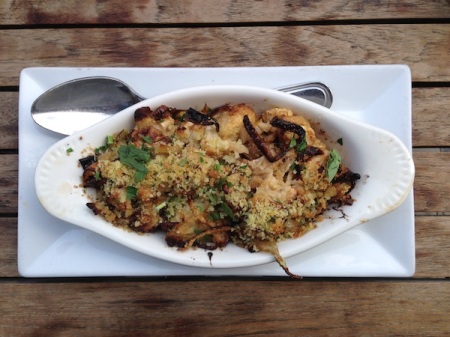 I love small plates! You can try a few different things, with portion control built in. A little later in the day, we stopped at Rita’s Ice, where I got a kiddie cup of Wild Black Cherry ice (like a snow cone). I didn’t indulge in many sweets on this trip, and this one had 190 calories, according to the Rita’s Ice website. 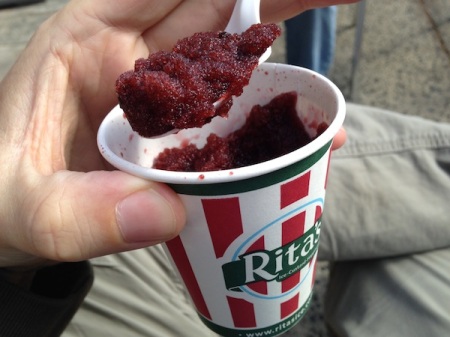 I met up with Heather and Adam a few more times before leaving town, and both times involved eating. One night we went to Bareburger, a small New York-based burger chain place, where I got their Berry Blue salad (spinach with dried blueberries, blue cheese, and almonds). Since Bareburger has a bunch of game meats on their menu, I had them top it with a elk patty and, of course, put dressing on the side. Elk, by the way, is super lean and flavorful. 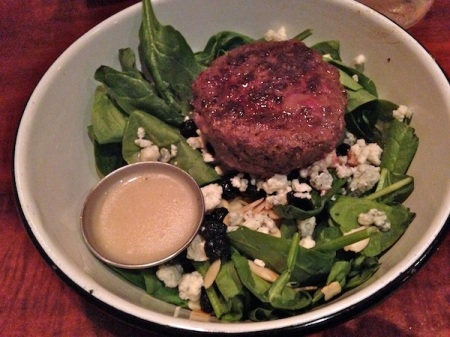 Both Heather and Adam work at Google, and their offices in Chelsea are gorgeous. I got a little tour. Among the employee perks is an incredible cafeteria that can accommodate all kinds of eaters with it’s huge array of foods: all sorts of cuisines, hot and cold, with signs everywhere listing ingredients, whether it’s vegetarian/vegan/gluten-free/etc. And it’s all free!

I took the opportunity to try a few things that I’d never had before. 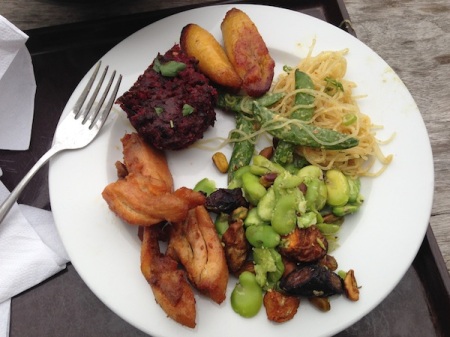 That’s Beet Loaf at 10 o’clock – a vegetarian take on meat loaf that was pretty good (and loaded with beets!). Two fried plantains at noon, a kelp noodle and snow pea salad at 2 o’clock, roasted carrots and fava beans at 5 o’clock, and some chicken in 7 o’clock.

I also bulked up my veggies with a trip to the salad bar, but I forgot to photograph that. We ate on a rooftop terrace, with an marvelous view of Midtown: 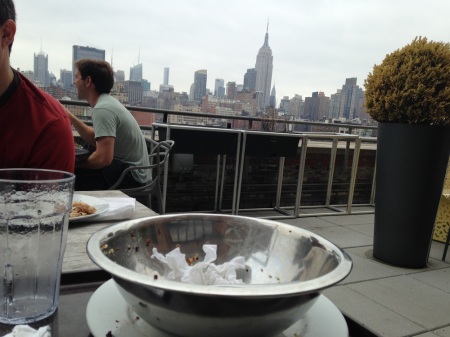 I’m jealous that Adam and Heather get to eat here every day!

Generally speaking, Google has some awesome policies to try to help their employees stay healthy. In addition to the smart food options, all sugary and high-calorie drinks are behind frosted glass in the fridges, so you can’t see them (healthier drinks like flavored water and iced tea are visible through clear glass). There are smaller kitchens throughout the offices for snacks, and while healthy snacks are on display, stuff like candy and chips are behind closed doors or in opaque containers. Out of sight, out of mind. Plus, Google offers gym equipment, and actively encourages employees to take the stairs, with signs like this one in the elevator lobbies: 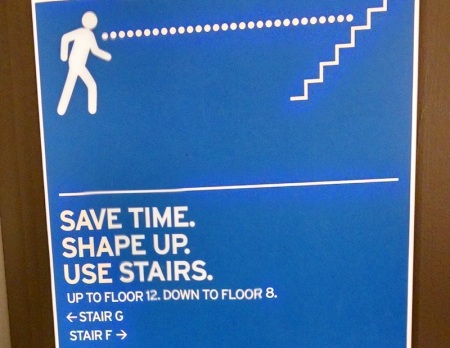 On Sunday night, I was walking around Williamsburg, a neighborhood in Brooklyn, with my friend Jonathan, and we were looking for a place to grab a bite. We settled on Caracas, which specializes in arepas, a South American dish that’s basically a flatbread made of coarse ground corn and stuffed with a variety of fillings. They’re small, so I got two, and one of them was the La Surena, which is filled with chicken, chorizo, and avocado. 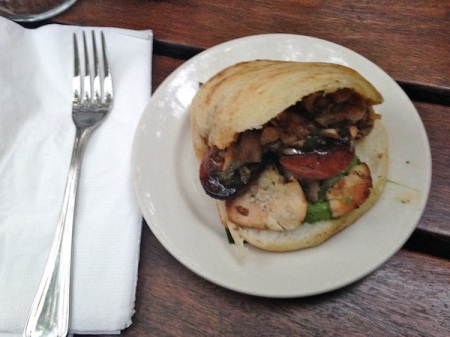 I met my friends Mindy and Antonia at a restaurant that they had never been to but thought I would like, called GustOrganics on 14th street. And they were right – I loved it! We all did. An organic menu, with lots of options if you’re vegetarian, vegan, dairy-free, gluten-free, and so on. (I’m not any of those things, but I like dining at those places, because they tend to provide lots of healthy options and are very accommodating about substitutions and swaps.) We split a couple appetizers among the three of us, and I ordered the veggie burger, which had sweet potatoes on the side. Mindy took this photo, and it’s one of my favorite food photos ever: 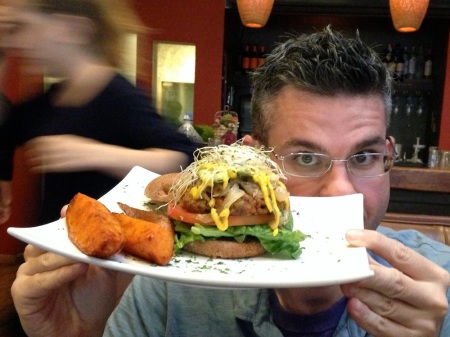 On my last night in town, I met two friends, Paul and Joel, at Amigo’s, which fused Mexican food with good ol’ American barbeque. I stuck to the Mexican part of the menu, and ordered Baja Fish tacos, because I was in the mood for fish. 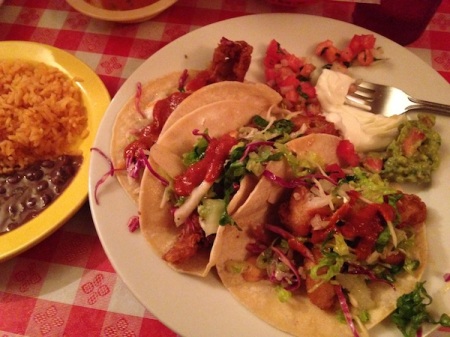 I didn’t eat the rice on the side, but everything else was fantastic. Mexican food is a treat for me. It’s delicious, but I find it’s one of the cuisines that I can easily pig out while eating, so I tend to avoid it most of the time. But I had eaten really well the rest of the day, and I knew we were meeting here, so I looked at the menu ahead of time and identified what I wanted. That way I wasn’t tempted to make impulse decisions once I sat down.

Last picture (I promise!): One day I had a really strong sweet craving, so I stopped at a store to walked out with a 120-calorie strawberry-flavored rice krispy square. I took it back to Aaron’s place and ate it alongside a bunch of blueberries. It hit the spot (although the strawberry part was a little weird) and my sweet craving was satisfying. 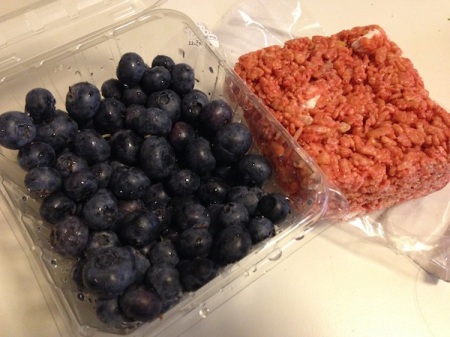 All told, I did pretty well. There were a couple things that I forgot to photograph – a veggie omelet with dry toast comes to mind – but that’s it!

So that’s the calories in. Calories out is a whole different story, and one I’ll tell next time, because I burned a TON of calories!

This entry was posted on Thursday, May 21st, 2015 at 1:23 am and is filed under Uncategorized. You can follow any responses to this entry through the RSS 2.0 feed. You can leave a response, or trackback from your own site.