I was looking through photos when I came across a bunch for a blog post I never wrote. Whoops! Better late than never, right? This recipe is for a super healthy, super easy salad. I made it when I was in Michigan for Christmas. Since it’s not END_OF_DOCUMENT_TOKEN_TO_BE_REPLACED

After looking back on 2014, it’s time to look ahead. I’m also gonna look up, because there are LOTS of stairs in my future!

I went berserk and signed up for a slew of stair races, all happening in the next three months. They’re all listed below. The first four are END_OF_DOCUMENT_TOKEN_TO_BE_REPLACED

We’re already almost half a month into 2015 (can you believe it?), but I need to do one big, final reflection on 2014. I’ve already shared my January weigh-in, but I never published my December Workout Progress Report. That’s because I’m rolling it onto a much bigger update: my 2014 Year-End Progress Report!

Breaking news! I’m a big nerd. One of my nerdier endeavors is to END_OF_DOCUMENT_TOKEN_TO_BE_REPLACED

This Vegetable is Dangerous. Seriously. It Will Hurt You.

My friend Jen was at the supermarket when she saw something she knew I’d love. So she bought it for me. There was just one problem: it’s really hard to handle, because it’s covered in thorns. And they hurt.

It’s called a thorny chayote, and the thorns are no joke. Jen wrapped it in a towel to bring it to my house, and the only I could manage to hold it, even for a little while, was to END_OF_DOCUMENT_TOKEN_TO_BE_REPLACED

My Dad’s Clever New At-Home Exercise Program – Try It Yourself!

It’s a new year – the time of year when lots of people are looking to goose their exercise and be more active. My father came up with an exercise program that anyone can try. It’s literally excuse-proof. You don’t need a gym membership. You don’t need any special equipment. You can do it at your own convenience, in your own home, rain or shine, even during the cold and snowy winter months. And if he can do it, you can do it! 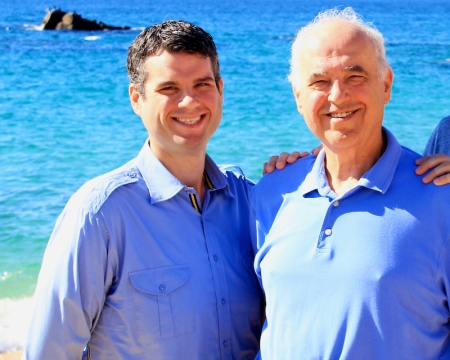 My father and I last year, in Mexico. The other hand on my dad’s shoulder is my brother’s, whom I unceremoniously cropped out. Sorry, Steven!

My father will be turning 71 next month, and in the past few months, he had a couple operations. END_OF_DOCUMENT_TOKEN_TO_BE_REPLACED

The Bridge to Nowhere

I wanted to start the new year off with an exciting exercise adventure. So I roped in my pal Jeff (who’s always game to explore someplace new), and on the second day of 2015, we headed out for a hike.

It was a rather epic hike – 11 miles. We hiked to the Bridge to Nowhere and back again, and it was incredible. My favorite hike yet. I liked it even more than END_OF_DOCUMENT_TOKEN_TO_BE_REPLACED

I’ve been lucky: thanks to an awesome schedule, amazing supporters and donors that help with my fundraising, and my own passion and drive, I’ve competed in every stair race that I’ve wanted to. I’ve done 14 so far!

My streak just came to an end. A couple weeks ago, I was denied the opportunity to race in the oldest, most prestigious race in the country. It’s held in this landmark building: