I switched up my workouts before last weekend’s Hike the Halo race. I bumped up my running, and did a couple workouts specifically designed to help me prepare. Both those workouts involved… lots and lots of stairs. (Surprise, surprise!)

In a perfect world, I would have published this post before the big race, but as we all know, the world isn’t perfect, and I got a little busy last week with work and other projects. Better late than never, right?

That photo was taken at the Swan Stairs, a public stairway in Silver Lake. There’s 287 steps, split into three sections, spanning three blocks. I met my friend Madeleine there, and a couple of her friends, for a morning workout.

We ran the stairs. We did Ohno drills (exercises that Apolo Ohno does on stairs, read about them in this post). I did a climb and run combo where I ran up and down each block before tackling the next chunk of stairs. Oh, and sprints. I did three sprints up the final section, which has 100 steps. And I stayed within the same 1.5 second window all three times!

Overall stats for that workout: It lasted 72 minutes, and between the running and stairs, I covered 1.7 miles. And I climbed 1,635 steps, which is only 29 steps shy of the stair count in the 75-story US Bank Tower, the tallest building in LA. Needless to say, I was pretty sweaty afterward!

The Swan Steps, by the way, is where I took one of my favorite all-time stair photos. Click here to check it out! (It’s not real.)

A few days prior, I met my friend Jeff for a workout in a neighborhood called Mount Washington. It was my first time exercising there. There’s a bunch of staircases, and another point of interest that I had been meaning to check out for some time (I’ll get to that in a sec). Jeff is a good workout buddy (our visits to Inspiration Point and a Charlie Chaplin filming location have been well documented in this blog), so it didn’t take much arm twisting to get him to come along on an urban hike.

(Jeff, by the way, had the fastest time at Hike the Halo and won the race. For the second year in a row!)

Photographing a street’s grade is not easy, so you just gotta believe me: Eldred is steep.

Eldred is so steep that it is eventually becomes unnavigable by car, and you have to continue on foot, up a 197-step stairway.

We also explored the neighborhood. We went to three other local stairways, which ranged from 56 to 122 steps each, and did each of them multiple times.

We also headed over to Moon Canyon Park, a big open space with steep hillsides and a trail.

Jeff, an avid trail runner, decided to run down into the canyon, up the other side to the far street, and back. I didn’t want to feel left out, so I did the same thing. You can see me, in my red shirt, climbing the far hill in this photograph:

That left only one thing to do in Moon Canyon. Sorry, I couldn’t resist! 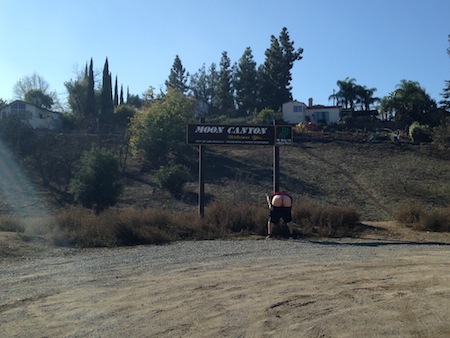 This entry was posted on Tuesday, December 16th, 2014 at 11:15 pm and is filed under Uncategorized. You can follow any responses to this entry through the RSS 2.0 feed. You can leave a response, or trackback from your own site.