I was looking for a protein-rich dinner idea the other night, and my eyeballs fell upon a big bag of shrimp in my freezer. Shrimp are a great source of lean protein, and I love them, and they cook super quickly. Then a new question arose: what would I eat with my shrimp? I started rooting through my cupboard looking for ideas when I came across something I forgot I had: 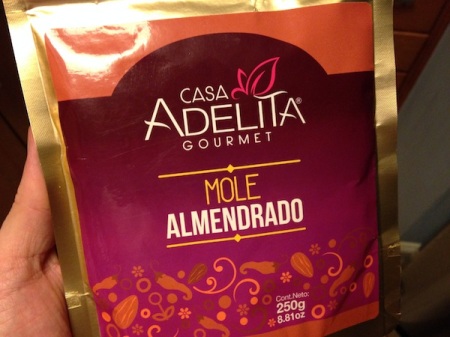 Mole sauce! Mole (pronounced “mo-lay”) is an amazing Mexican sauce that’s thick, rich, and incredibly layered and complex. There’s chiles in it, and usually nuts, spices, veggies, aromatics and chocolate (the recipe varies from region to region in Mexico). I’ve never made mole from scratch before, because you need a ton of ingredients (this Food & Wine magazine recipe calls for over 20), and it can take hours to make properly. The jarred mole sauces I’ve seen in stores often are loaded with sodium, which is a turn-off for me, so, as a result, I don’t eat mole very much.

But I found this pouch of packaged mole sauce at the airport when I was in Mexico last winter, and it’s remarkably low in sodium – only 30mg per serving! – so I brought it home with me. And forgot about it.

Making this mole sauce was really easy, although the instructions threw me for a loop. Can you figure out why?

There’s actually a couple reasons. First, it doesn’t specify if you should pre-cook the meat before adding it to the mole. Luckily for me, this wasn’t a big issue. Three minutes is more than enough time to cook shrimp – it’s actually too much. But I don’t think an entire chicken breast, for example, would be done in three minutes. (I didn’t use the whole package, so I’ll probably have to cross this bridge another time.)

The big problem I had with the instructions is that… the math is wrong! 2 tablespoons is not the same as 1/6 cup – it’s actually 1/8 cup. Similarly, 22 tbsp is not 3/4 cup, it’s actually 1 and 1/3 cups. Whoops!  I ended up ignoring the tablespoons altogether, which was smart, because it prevented me from standing at my sink counting out 22 tbsp of water – what a chore that would be.

RELATED CONTENT: Check Out Dozens of Recipes On My Recipes Page!

I defrosted 1 pound of shrimp, and I figured that was 2 portions, so I doubled the instructions. The mole package contained a thick, super-concentrated sauce that was the consistency and color of a partially cooked brownie.

Boy, did it smell good! Spicy and nutty. I measured out 1/3 of a cup, and dissolved it with a whisk into 1.5 cups of water. Once it was dissolved and boiling away, I added the shrimp (I did two batches). 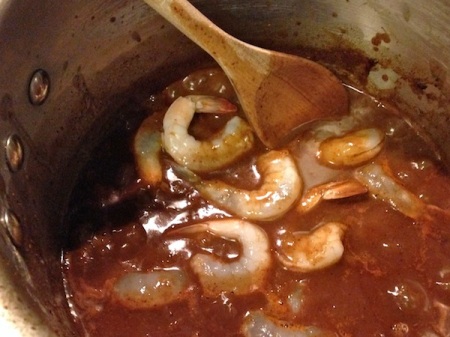 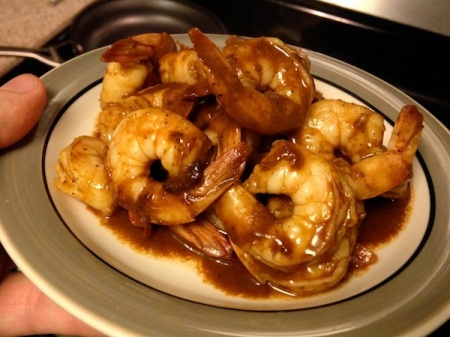 I quickly sauteed some onions and pepper to have with it (although I forgot to photograph it), and it was a delicious, quick meal. I noticed afterward, when I was cleaning up, that the mole left in the pot had thickened, so next time I’d let the mole boil a few minutes longer before I added the shrimp, just so I cold get some of that thickness on the plate.

The idea was that I’d have dinner and enough leftover for lunch the next day, but I ended up polishing it all off. The sauce has 8 grams of fat and 160 calories per serving, so I didn’t feel guilty at all.

This entry was posted on Friday, October 17th, 2014 at 12:01 am and is filed under Uncategorized. You can follow any responses to this entry through the RSS 2.0 feed. You can leave a response, or trackback from your own site.