My First Visit to the Santa Monica Stairs

Two friends from college came to town over the weekend. I’ve known Katie and Julie for about 15 years now. I see Katie once a year or so, but it’s been about 5 or 6 years since I’ve seen Julie, so it was really fun to reconnect. I picked them up from the airport, and since Julie had never felt the Pacific Ocean lapping at her feet, we went straight to the beach.

Since I have the longest arms, I held the camera during the selfies.

We spent an hour walking the beach, and the sand was so hot it literally burned my feet. As in, they hurt for the rest of the day. Oh! And there was a fun moment where I came thisclose to locking my keys in the car, but Julie crawled through the tiny gap between my trunk and back seat and saved the day.

We hung out the rest of the day: met up with other friends of theirs, and later, a potluck dinner with even more friends (I’ll be blogging about my contribution soon). The next morning I dropped them off in Santa Monica, where they met up with friends for a road trip to a wedding. The drop-off point was mere blocks from a local point of interest that I’ve heard about but never seen: the Santa Monica Stairs.

There are lots of public stairways all over Los Angeles, but most of them (including many that I’ve blogged about, like the Music Box Stairs, St. Andrews Stairs, Swan Stairs, and the stairs around High Tower Court) are way on the other side of town. Those are all easier for me to get to, which I why I favor them, but the Santa Monica Stairs are popular. Since I was only a few blocks away, I couldn’t resist the opportunity to work out on them!

“Popular” is an understatement. These stairs were downright crowded! I’ve never seen so many people climbing a public stairway for exercise.

The Santa Monica Stairs consists of two parallel stairways, located a couple blocks apart, that connect the top of a bluff with the bottom of a canyon. The first stairway I climbed had 189 steps, with lots of landings. The stairway jogs left and right a handful of times, which is a nice feature.

After climbing that stairway three times, I headed down the street to tackle the other stairway. While this one was technically a little shorter (170 steps instead of 189), it didn’t jog at all and had only three landings, which made it tougher. Most of it was made from wood, too, which was a new experience for me. Wood has a little give to it, which I felt on every step, and when other climbers clomped past, the whole stairway would tremble from the impact of their feet. 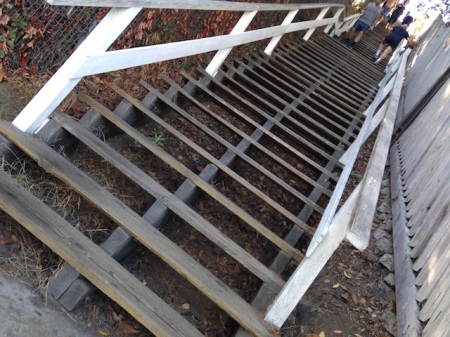 My goal was to climb the second stairway three times as well, but I was feeling good, so partway through my workout I upped my goal to four times up each stairway, with the final climb being a sprint. By the time I got to the sprints, I was tired and sweaty, but I took a good rest and, on each sprint, made to the top in about a minute and a half. In between the sprints, I found a shorter stairway off to the side that had 43 steps, so I climbed that too, because why not?

After my final sprint, I walked a few blocks towards the ocean to cool down. Who can complain about working out in a place with views like this?

Including the cool-down, I was at the stairs for an hour and three minutes. Time for some stair-count math!

This workout also included something I haven’t done in a long time: descending stairs. All of my stair training in the past month has been in downtown skyscrapers (either the Wells Fargo Center or 400 South Hope), and in buildings, you always take the elevator down. Going down stairs is much more taxing on your body than going up, but there’s no alternative on public stairways. So, in addition to climbing those 1,479 steps, I also went down 1,479 steps, and the next day, I was feeling it. Especially in my calves. Man, were they sore! They still are.

It was worth it, though. I don’t mind being sore. It always goes away, and it means I’m doing something right. And that workout on the Santa Monica Stairs was all kinds of right!

PS: On the way home, I got to see something that’s rarely seen: a completely empty 405 freeway! The 405 is officially the busiest interstate in any US city, but the police shut down all the northbound lanes right in front of me to move two cars that were in an accident to the shoulder. We were only stopped for two or three minutes, but I bet it clogged the freeway behind us for miles.

This entry was posted on Tuesday, August 19th, 2014 at 12:01 am and is filed under Uncategorized. You can follow any responses to this entry through the RSS 2.0 feed. You can leave a response, or trackback from your own site.

2 Responses to My First Visit to the Santa Monica Stairs