Check out this photo from after my workout on Monday:

Drenched in sweat? On the 26th floor? You don’t have to be Nancy Drew (or even George or Bess) to figure out that this picture was taken in a stairwell. And that means one thing…

…My training has resumed! I’ve got a stair climb race coming up!

Actually… I have four. (!) I recently went on a spree and registered for a slew of stair races happening before the end of the year. Three of them are races I’ve done before:

As for the fourth race… well, it’s an out-of-state competition that’s so exciting it deserves its own post. Stay tuned!

RELATED CONTENT: Check out recaps of all my races and events on my appropriately-titled “Races & Events” page!

The first of these races is the US Bank Tower, on September 19th – about 10 weeks away! The US Bank Tower is the tallest building west of the Mississippi, and has a total of 75 floors. The YMCA, which organizes the event, offers specific windows of time that you can train in a skyscraper stairwell, so I headed downtown to take advantage of the opportunity.

Training was held in the building across the street. The building is named 400 South Hope (which is, conveniently enough, its address), and it’s 26 stories tall. 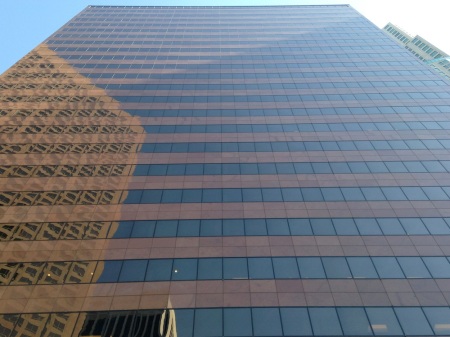 See the tan building peeking out in the upper right corner of the photo? That’s the US Bank Tower. It’s about three times as high. Here’s an artsy-fartsy photo of both buildings that incorporates a giant sculpture, too: 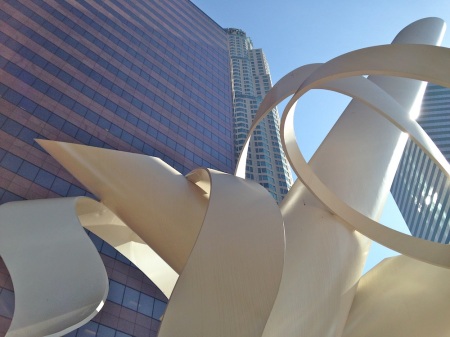 US Bank Tower doesn’t look three times as high from this angle, but it is!

I haven’t been in a stairwell for six weeks, ever since my last race (the San Diego TOWERthon, where I kicked ass and brought myself to tears), and I’ve enjoyed my hiatus from the stairs. But I want to set a new personal best in the US Bank Tower, and that means lots of training.

I didn’t have a goal for this first training – I wanted to see how I felt on the stairs and play it by ear. I ended up arriving around the same time as my friend Jeannie, so we climbed the stairs together, which worked out well, because we’re about the same speed.

Although the building is 26 stories, the exit from the stairwell to the elevator is on the 20th floor, and Jeannie and I ended up climbing those 20 stories five times. On the last climb, we made it all the way to 26 (and then had to descend 6 stories to get back to the elevator).

I timed every climb, and I thoroughly impressed myself with my speed and consistency. Given my hiatus, I assumed I’d be really rusty, slow, and generally all over the place. But that was very clearly not the case:

Five 20-story climbs, all completed within 17 seconds of each other?  Well done, David!  Jeannie got this awesome pic of me at the very end of our last climb…

Jeannie, by the way, is in her 50s, and is a dedicated, accomplished stair racer. Very inspiring!

The stairwell entrance for the training sessions is outdoors, and after we were finished, I relaxed for a little bit on a bench before heading for the train to go home. It was then that I took this final picture: looking up towards the top at 400 South Hope, with a reflection of the US Bank Tower:

This entry was posted on Wednesday, July 16th, 2014 at 12:04 am and is filed under Uncategorized. You can follow any responses to this entry through the RSS 2.0 feed. You can leave a response, or trackback from your own site.