What’s in the Crockpot? Part Eleven

WHAT’S IN THE CROCKPOT?

BALSAMIC-MAPLE BRUSSELS SPROUTS are in the crockpot! 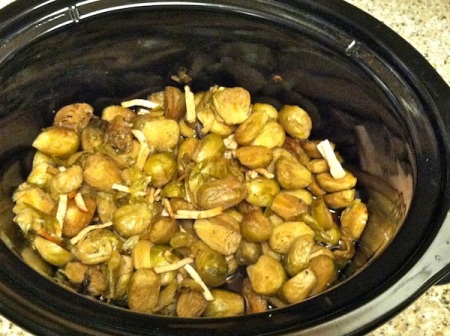 They may not be the prettiest dish, but crockpots are really good at leeching the color out of everything. They are tasty, though. Isn’t that the most important thing? They’re easy to make, too.

RELATED CONTENT:  See My Other ‘What’s in the Crockpot’ Recipes at the Bottom of My Recipes Page!

Start with a bunch of Brussels sprouts. I used nearly two pounds of them, courtesy the LA Salad Company. These were on the small side. I started by cutting them all in half. (If they’re bigger, maybe cut them in quarters.) 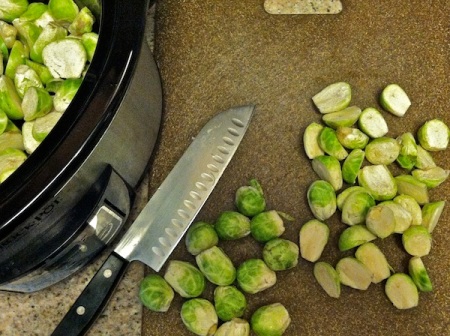 They all went into the crockpot. Then, I added about 3 tablespoons of balsamic vinegar.

After that, I added about 2 tablespoons maple syrup. 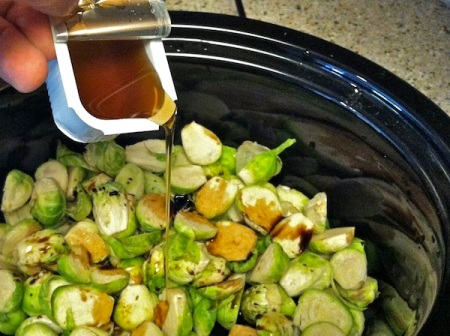 Why YES! That IS a packet of syrup from IHOP! Aren’t you observant! It was the perfect amount for this recipe, and I just happened to find it in the back of my fridge. It saved me from having to buy a whole bottle of syrup, so I’m thankful for that!

Next, I added some Canadian bacon – about 3 ounces (which was 5 slices), which I sliced into thin strips.

Sprouts from Brussels, bacon from Canada… a truly international dish!

I added a few cranks of fresh cracked pepper, and about 1/2 cup of water, just to aid in the creation of a glaze. Then I turned the crockpot to Low and came back 3 or 4 hours later.  You already saw the finished result, but here’s what it looked like in the bowl.

Again – not the prettiest dish, but I sure did enjoy eating it! The bacon added a salty note, and the balsamic-maple glaze nicely walked the fence between acidic and sweet. The glaze was a little thin, so I would serve these in a bowl rather than a plate, so you could spoon some of the sauce from the bottom over the sprouts. And the sprouts themselves were super tender. I’ve never slow-cooked Brussels spouts before, but it’s something I’d certainly do again!

This entry was posted on Monday, June 9th, 2014 at 12:02 am and is filed under Uncategorized. You can follow any responses to this entry through the RSS 2.0 feed. You can leave a response, or trackback from your own site.

4 Responses to What’s in the Crockpot? Part Eleven